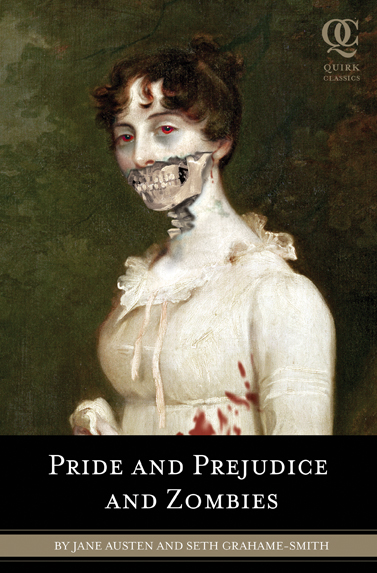 The blurb on the back of Pride and Prejudice and Zombies brazenly declares that Seth Grahame-Smith’s addition of zombie-fighting action to Austen’s classic “transforms a masterpiece of world literature into something you’d actually want to read.” Perhaps the blurb’s brag is just a bit of cheeky fun; after all, Austen’s staid survey of manners and mores is a perennial favorite, coming in second to only The Lord of the Rings in a recent BBC poll of British readers, as well as topping a similar poll in Australia. Clearly, people not only want to read it, they actually do, and in large numbers each year. There’s even been enough interest in it for a not-that-bad movie update just a few years ago. So it’s hardly as if Pride and Prejudice is a corpse in need of resuscitation. This begs the question: What nuances and comments does Grahame-Smith have to add? Not much, we’re afraid.

The most interesting aspect of Pride and Prejudice and Zombies is its concept, a promise for weird laughs and sick kicks neatly summed up in its fantastically morbid cover. Grahame-Smith doesn’t so much re-imagine Pride, but simply stuff a murderous host of zombies into Austen’s romance. These “unmentionables,” as the polite Regency society folks call them, wage a war on good stolid Englishmen. Fortunately Mr. Bennet has trained his daughters, led by feisty Elizabeth, in the ways of the ninja. Between matchmaking, letter-writing, polite dances, and furtive glances at Mr. Darcy, the Bennet sisters slice up zombies left and right with their katanas. The press-release for Pride and Prejudice and Zombies claims that the book retains 85% of Austen’s original, and no major plot points are changed or missing. Instead, the reader is subjected to seemingly purposeless bouts of zombie fighting after every scene. Of course, to decry these fights as purposeless seems silly; after all, when you pick up a book called Pride and Prejudice and Zombies, you expect zombies, don’t you?

Grahame-Smith’s premise sounds like great good fun in theory, but it turns out that adding zombies and ninjas to a classic beloved romance is neither terribly engaging or interesting. We love zombies at Biblioklept, but the most effective zombie tales–28 Days Later, Night of the Living Dead, Dawn of the Dead–work beyond horror and serve also as a form of social commentary or even satire. Grahame-Smith seems to miss, or even ignore, any opportunity to comment on, criticize, or otherwise inform the novel he’s cannibalizing. Instead, his additions convey the energy, wit, and sophistication of a one-note SNL sketch. The premise gets old fast, and it becomes increasingly confusing who this novel is for. It’s unlikely to appeal to most Austen fans, as it provides no real comment on her methods, plotting, or characterization, and as far as a zombies-and-ninjas riff goes, it’s pretty standard fare. Ultimately, it seems like more of a conversation piece than something you’d actually read for enjoyment, a little coffee table book that might evoke some interest. Flick through the amusing illustrations, chuckle, and move on.

Pride and Prejudice and Zombies is available soon from Quirk Books.