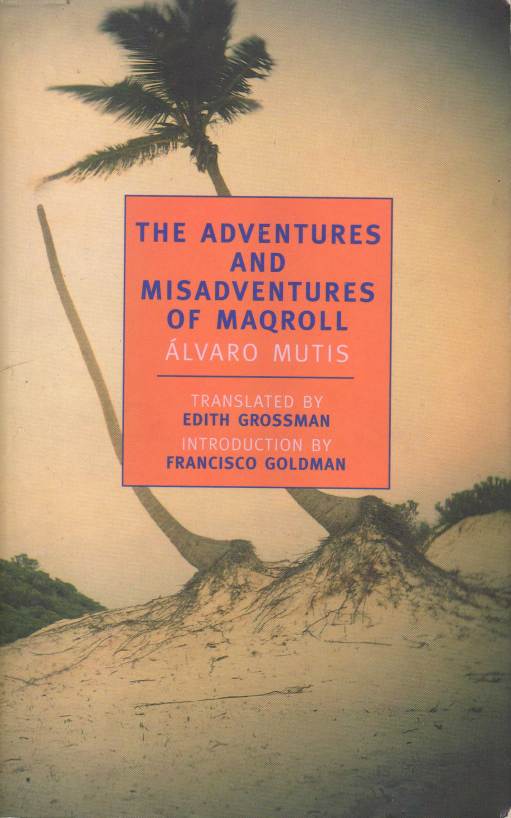 The Adventures and Misadventures of Maqroll is difficult to categorize. It’s an outlaw adventure story populated by men and women who live where and how they must; these are the people who work near shipyards and the banks of unexplored river tributaries, people who value candor and honesty but for whom strict adherence to the law is often inconvenient. The book is a philosophical rumination on friendship and creation, romance and deception, obstinance and poverty.

The book isn’t a novel, but a collection of seven novellas about Maqroll the Gaviero, written by Álvaro Mutis, who is, according to the introduction and the book jacket, one of Latin America’s finest poets and best friend of Nobel laureate Gabriel Garcia Marquez. A gaviero is the ship’s lookout, the sailor tasked with sitting atop the masts scanning the horizon.  His eyes must always be active.  He must be alert to the nuances of the sea and the capabilities of his vessel.

Mutis is present in these stories, but in a passive role, as reporter of the Gaviero’s adventures. Narrated in no particular order, selected so as to highlight Maqroll’s insatiable desire for experience, each story alludes to many imagined but unwritten characters, places, and events. We’re left with an incomplete impression of a rogue’s beautiful life—Mutis’s ode to his notion of the romantic seafaring gypsy.

The Gaviero is part of a group of wanderers who fascinate those who task themselves with creating whatever literature might be: the spies, pirates, and cowboys who abide the outrageous and rely as much on apathy as on strength in order to avoid the nooses and axes weilded by their enemies.

The Gaviero is not a symbol.  He is a fleshed-out character, as well as the embodiment of an ideal: the knife fighters and Viking poets idolized by Borges, a mixture of Robinson Crusoe, Sam Spade, and Don Quixote. He indulges fantasy but prepares for disappointment. He lives between lawlessness and acceptability. Barkeeps lose a new friend and a good source of business when he leaves town, and one woman always sits in the main room of her home, wondering whether anything she has given will supplement his resolve. He enjoys good food, uncomplicated wine, and the company of interesting friends. The Gaviero is who we all dream of being when we contemplate throwing everything away.

Ilona Comes With the Rain finds Maqroll destitute in Panama City, Panama after the suicide of his ship’s captain. We learn this is a city “like a sedative, full of agreeable but unkept promises of unexpected happiness”; Ilona, the second story in the collection, is indicative of the tone of the collection. Washed up at a hotel owned by a fence and finding himself selling stolen goods outside of tourist attractions, the Gaviero encounters a familiar face by chance, a woman who takes him in, feeds, and clothes him. They make love and decide afterwards to open a brothel catering to men with a thing for stewardesses. It is a magical, buoyant tale and emblematic of the mixture of adventure and world-weariness that Mutis maintains throughout the collection. Before the tragic end we’re treated to stories about a pair of incubi, spirits of noblemen, who drive women insane, the dangers of allowing bookkeepers into whorehouses, and a blind Anatolian with the ability to guess a woman’s place of employment by the texture of the fabric of her clothes.

Throughout the collection, Mutis takes his readers from Malaysia to Finland, from the Mediterranean to the Caribbean.  We live, with the Gaviero, through malarial fever dreams, military interrogations, and assassination attempts.  Un Bel Morir is perhaps the standout story.  Our hero finds himself older, angrier, and  more alone than ever, in a languid town on the banks of a pestilent river.  Broke and bored, knowing better, he takes a job running cargo by mule train up a crumbling mountain trail for a Dutchman with cash (and questionable motives). The Gaviero must evade capture by the rebel forces he has unwittingly aided—as well as the government troops who question his history and motives.

Mutis spent most of his career as a writer crafting verse and not prose, and his poetic inclinations shine through in pieces like this one, a good story that becomes great when the beauty of the unchanging landscape is evoked and contrasted with the hero’s pitiful condition. The cycle of life.  In Un Bel Morir, Maqroll, surrounds himself with beauty, contemplates it, and then tortures himself with unanswerable questions:

. . . the aroma of perpetually damp foliage, the explosion of rich, unrestrained color, the thunder of water in the ravines singing its opulent descent in boiling crests of foam, an ancient restorative peace replaced the weariness of the road and the struggle with the mules. The sordid deceptions he foresaw in the uncertain enterprise lost all reality and were buried in the resigned acceptance of his Islamic fatalism.

This is a delightful book, but not a happy one. The Gaviero symbolizes the struggle to internalize the good while accepting the inevitability of the bad, the chance to create the type of death we envision for ourselves, one with as many or as few regrets as our daily lives will tolerate.

Mutis, a thorough Romantic, compels his readers, through the Gaviero, to examine our reasons for despondency, and instructs us to cherish our innate ability to fall in love with the world and with each other. This collection is an exhortation, a reminder that circumstances change but that innocent pleasures are abundant, available, and free.

20 thoughts on “The Adventures and Misadventures of Maqroll — Álvaro Mutis”