Dead Man Working is the latest from Carl Cederström (whose discussions with Simon Critchley became How to Stop Living and Start Worrying) and Peter Fleming. The book explores the existential despair of workers in our post-capitalist age. (It’s funnier than that description might suggest). Publisher Zer0’s blurb:

Capitalism has become strange. Ironically, while the ‘age of work’ seems to have come to an end, working has assumed a total presence – a ‘worker’s society’ in the worst sense of the term – where everyone finds themselves obsessed with it. So what does the worker tell us today? ‘I feel drained, empty – dead’; This book tells the story of the dead man working. It follows this figure through the daily tedium of the office, to the humiliating mandatory team building exercise, to awkward encounters with the funky boss who pretends to hate capitalism and tells you to be authentic. In this society, the experience of work is not of dying…but neither of living. It is one of a living death. And yet, the dead man working is nevertheless compelled to wear the exterior signs of life, to throw a pretty smile, feign enthusiasm and make a half-baked joke. When the corporation has colonized life itself, even our dreams, the question of escape becomes ever more pressing, ever more desperate. 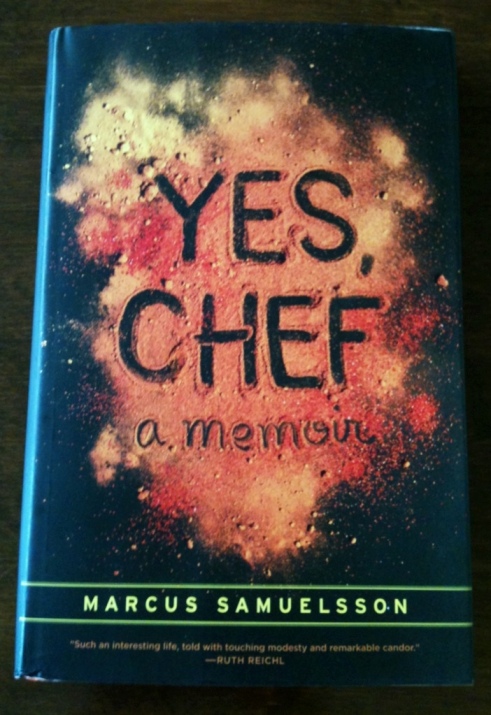 Yes, Chef is Marcus Samuelsson’s memoir. If that name sounds familiar, you might recognize his face:

Marcus Samuelsson was only three years old when he, his mother, and his sister—all battling tuberculosis—walked seventy-five miles to a hospital in the Ethiopian capital city of Addis Adaba. Tragically, his mother succumbed to the disease shortly after she arrived, but Marcus and his sister recovered, and one year later they were welcomed into a loving middle-class white family in Göteborg, Sweden. It was there that Marcus’s new grandmother, Helga, sparked in him a lifelong passion for food and cooking with her pan-fried herring, her freshly baked bread, and her signature roast chicken. From a very early age, there was little question what Marcus was going to be when he grew up.

Yes, Chef chronicles Marcus Samuelsson’s remarkable journey from Helga’s humble kitchen to some of the most demanding and cutthroat restaurants in Switzerland and France, from his grueling stints on cruise ships to his arrival in New York City, where his outsize talent and ambition finally come together at Aquavit, earning him a coveted New York Times three-star rating at the age of twenty-four. But Samuelsson’s career of  “chasing flavors,” as he calls it, had only just begun—in the intervening years, there have been White House state dinners, career crises, reality show triumphs and, most important, the opening of the beloved Red Rooster in Harlem. At Red Rooster, Samuelsson has fufilled his dream of creating a truly diverse, multiracial dining room—a place where presidents and prime ministers rub elbows with jazz musicians, aspiring artists, bus drivers, and nurses. It is a place where an orphan from Ethiopia, raised in Sweden, living in America, can feel at home.

With disarming honesty and intimacy, Samuelsson also opens up about his failures—the price of ambition, in human terms—and recounts his emotional journey, as a grown man, to meet the father he never knew. Yes, Chef is a tale of personal discovery, unshakable determination, and the passionate, playful pursuit of flavors—one man’s struggle to find a place for himself in the kitchen, and in the world.