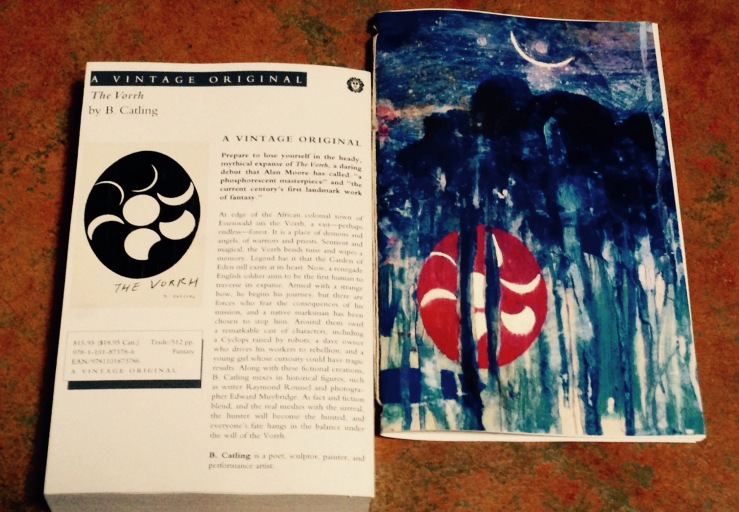 Brian Catling’s historical-fantasy novel The Vorrh is getting a U.S. publication next year from Vintage. I’m thinking that the actual cover will be that image on the upperish-mid-left side of the back cover of the uncorrected proof I got. Vintage also send this neat little string-bound teaser that consists of Alan Moore’s gushing introduction to The Vorrh and an interview with Catling. The cover is one of Catlin’s paintings.

The Vorrh follows a brilliant cast of characters through a parallel Africa where fact, fiction, and fantasy collide. Tsungali, a native marksman conscripted by the colonial authorities–against whom he once led a revolt–is on the hunt for an English bowman named Williams. Williams has made it his mission to become the first human to traverse the Vorrh, a vast forest at the edge of the colonial city of Essenwald. The Vorrh is endless, eternal; a place of demons and angels. Sentient, oppressive, and magical, the Vorrh can bend time and wipe a person’s memory. Between the hunter and the hunted are Ishmael, a curious and noble Cyclops raised by Bakelite robots; the evil Dr. Hoffman, who punishes the son of a servant by surgically inverting his hands; and the slave owner MacLeish, who drives his workers to insanity, only to pay the ultimate price. Along with these fictional creations, Brian Catling mixes in historical figures, including surrealist Raymond Roussel and photographer and Edward Muybridge.  In this author’s  hands none of this seems exotic or fantastical. It all simply is.