Paul Kirchner’s cult classic comic strip The Bus originally ran in Heavy Metal from 1979-1985. The (anti-)story of “a hapless commuter and a demonic bus” (as Kichner put it himself in a recent memoir at The Boston Globe), The Bus, at its finest moments, transcends our expectations for what a comic strip can and should do. Sure, Kirchner delivers the set-ups, gags, japes, and jests we expect from a cartoon—but more often than not The Bus surpasses the confines of its form and medium. Its protagonist The Commuter is an allegorical everyman, a passenger tripping through an absurd world. Kirchner’s strip often shows us ways to see that absurd world—which is of course our own absurd world—with fresh eyes.

Thanks in part to the internet (and, in particular, an album of scans posted at Imgur), Kirchner’s comic has found a new audience. Over the past few years, Kirchner’s produced more than 40 new strips, which are now collected in one handsome volume as The Bus 2 (or the bus 2 if you like) from French publisher Tanibis Editions. Tanibis also has collected the original run of The Bus in an edition that’s more complete (and polished) than the Imgur album. These books are fantastic stuff.

The Bus 2 picks up in full satirical mode with an intro that informs us that “the studio that produced ‘The Bus’ was forced to shut down” in 1985; “Its closing left over 70 talented employees jobless.” The intro unwinds over a few pages—we’re told the bus itself and the “commuter’s iconic overcoat” are now in museums, and that the role of the commuter in this sequel will be played by the son of the actor who played the original commuter. From the outset, Kirchner uses irony to draw our attention to the artificiality of his strip, highlighting The Bus as a performance, an entertainment focused on the utterly mundane topic of a daily commute. And even though the intro unfolds over four pages, Kirchner keeps it true to form—literally: Six equal black and white panels.

The first strip in the new collection positions The Commuter as an ironic hero, a foundling in a basket like Moses or Superman (note the signs that Kirchner employs to show the passage of time):

In no time, our hapless hero is back on the chain gang, quite literally: 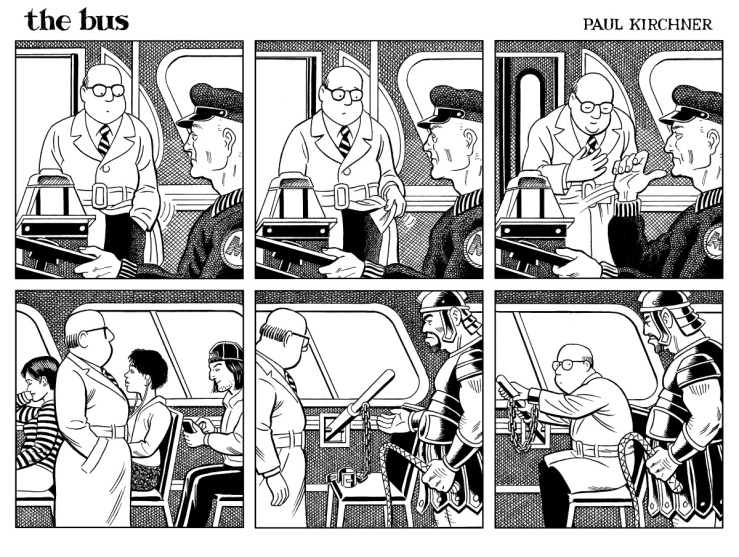 As in the strips from eighties, the punchlines in The Bus 2 often pivot on our expectations, our perceptions, our subtle, unexamined prejudices. Kirchner often asks us to see that we don’t always see: 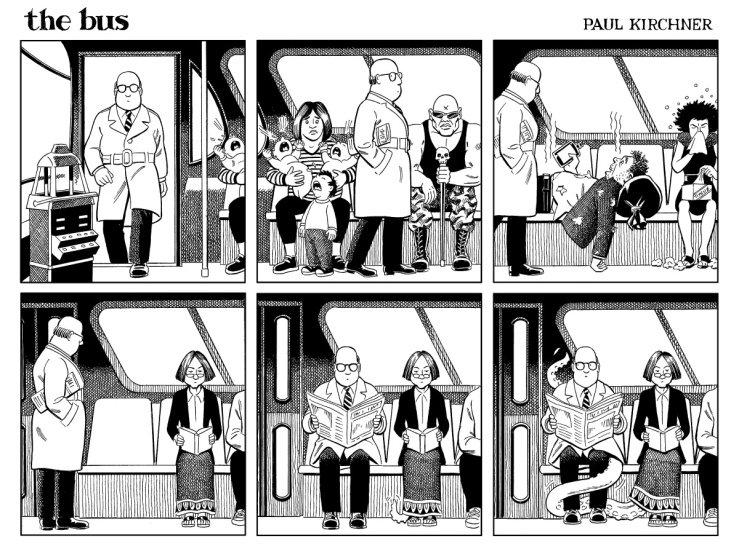 And while The Bus is primarily humorous, there’s an aching existential dread underneath the humor, a sense that there’s no exit from this trip:

Indeed, our Commuter is a Sisyphean hero of sorts; even if the trip doesn’t seem to go anywhere, it’s nevertheless inescapable:

“Existential dread…no exit…Sisyphean” — okay, maybe I’m laying it on a bit too heavy here. If The Bus 2 evokes existentialist themes, it also embraces the surreal fun that an absurd world offers for those willing to lift the curtain: 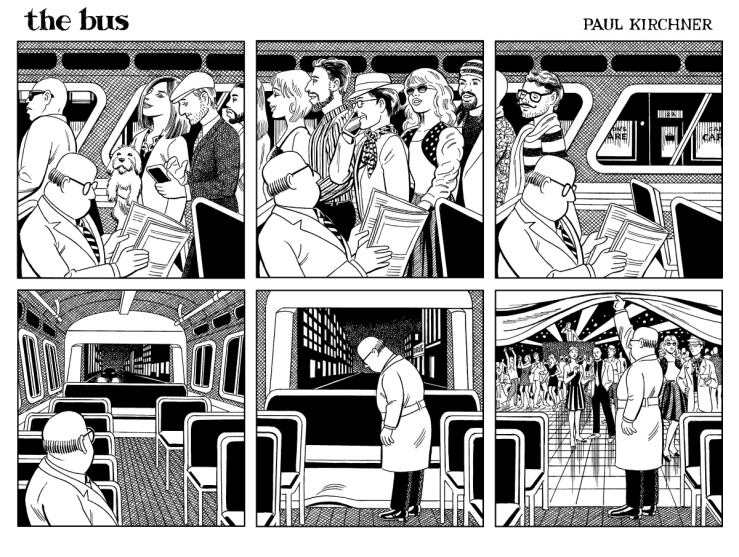 Again and again, Kirchner’s Commuter finds a new way of seeing. He gazes out the bus window onto a street scene that shifts into a glimpse of the cosmos; the fantastic tattoos of a fellow passenger come to full demonic life; the bus itself becomes a circus performer. Mundane absurdity transmutes into fantastic absurdity.

The Bus 2, like its predecessor, is a remarkably and perhaps unexpectedly human strip. We  may often identify with its passive protagonist, thrust into a world that is so often beyond our control—let alone our comprehension—but we can nevertheless dream awake. Are our visions just imaginative consolations in an otherwise mundane life? And if they are, does it matter?

10 thoughts on “A review of Paul Kirchner’s surreal sequel, The Bus 2”