Eddie Campbell’s book Alec: How to Be an Artist (Eddie Campbell Comics, 2001) covers the “rise and fall of the graphic” over the course of a few decades. Alec combines memoir with art history and art criticism, all told through scratchy inks and spidery lettering (and plenty of pastiche–Campbell literally pastes the work of other comic artists of the last century throughout the book, along with “serious” artwork  ). While Campbell’s autobiographical stand-in “Alec MacGarry” is obviously central to the story, other figures loom here, including Bill Sienkiewicz (“Billy the Sink”), Art Spiegelman, Stephen Bissette, Dave Sim, Eastman and Laird—and especially Campbell’s From Hell partner, Alan Moore.

How to Be an Artist offers a fascinating and personal look at the time before (and immediately after) comic books reached a tipping point into (gasp!) serious artistic respectability. Witty, warm, and occasionally cruel, Campbell’s book explores the intersection of commerce and art in a very particular place and a very particular time.

The book was especially revelatory for me, I suppose: I transitioned from super hero comics to, like comix in the early nineties, a transition helped by works championed in How to Be an Artist, like Neil Gaiman and Dave McKean’s Sandman books and Dave Sim’s Cerebus. Indeed, the backpages of Cerebus in the late eighties and early nineties operated like a long messy ranty meditation on the theme of “How to be an (independent, successful, self-publishing) artist”—and it was also in the backpages of an issue of Cerebus that I first saw Campbell’s work (the prologue of From Hell was published in Cerebus #124).

How to Be an Artist’s final chapter sees Campbell offer up a canon of “graphic novels” from 1977 to 2001 (I’ve typed out the full list at the bottom of this post). Campbell (or, properly, Campbell’s persona Alec) begins the chapter by dwelling on the problematic term “graphic novel”:

After resolving to use the term, despite whatever problems might be attached to it, Campbell goes on to point out that, after the success of works like Watchmen and Maus, a glut of so-called “graphic novels” flooded the market place. He then goes about naming the best, those works that represent a “worthwhile phase in the human cultural continuum”: 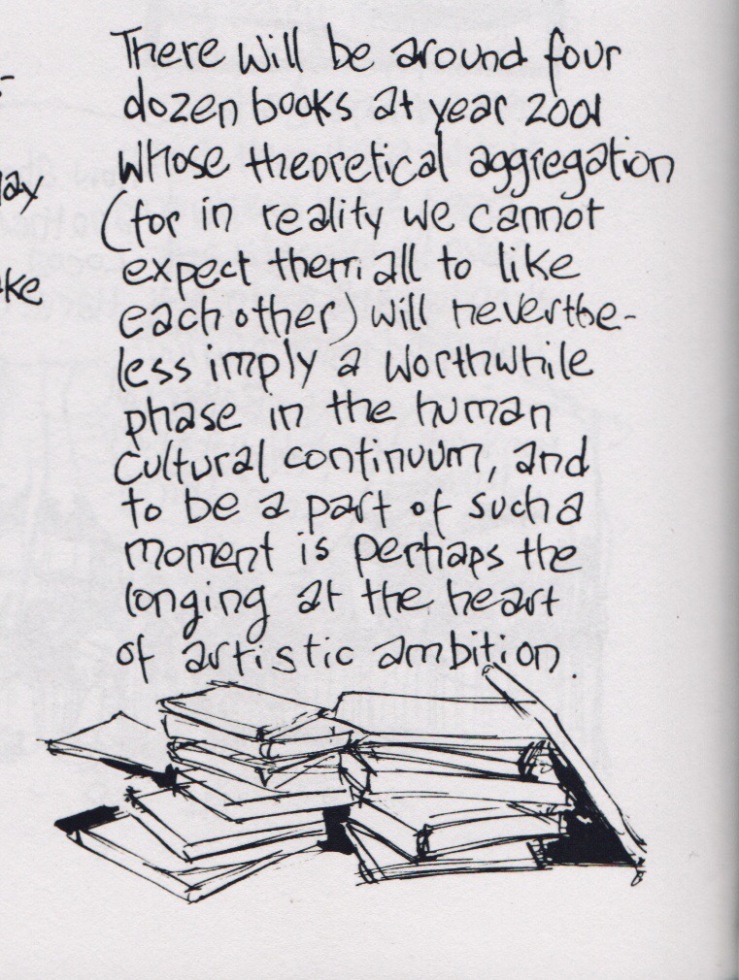 The list is organized semi-chronologically; Campbell groups works in a series together, as with Will Eisner’s Dropsie Ave books. Here’s the first page of the canon, to give you an idea of its form and layout (note that the list, like the entire book, is written in the future tense): 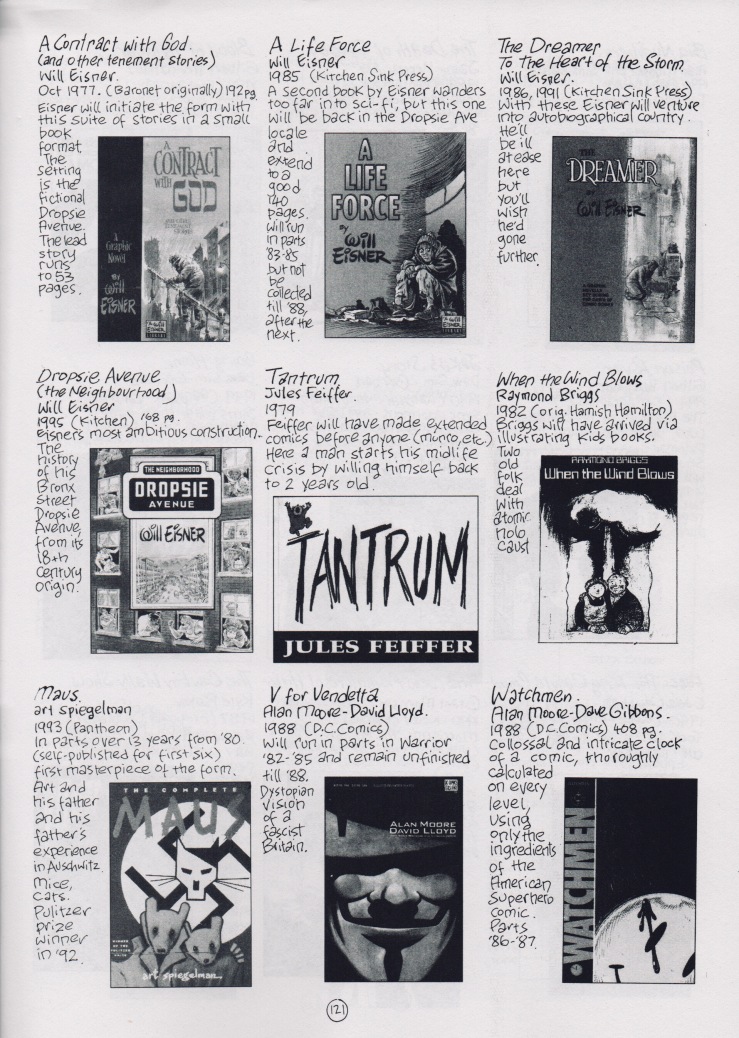 I’ve also never read, to my shame, the unfinished project Big Numbers (by Alan Moore and Bill Sienkiewicz). Campbell details the drama surrounding why the project was never finished in How to Be an Artist. I’ll have to track it down. 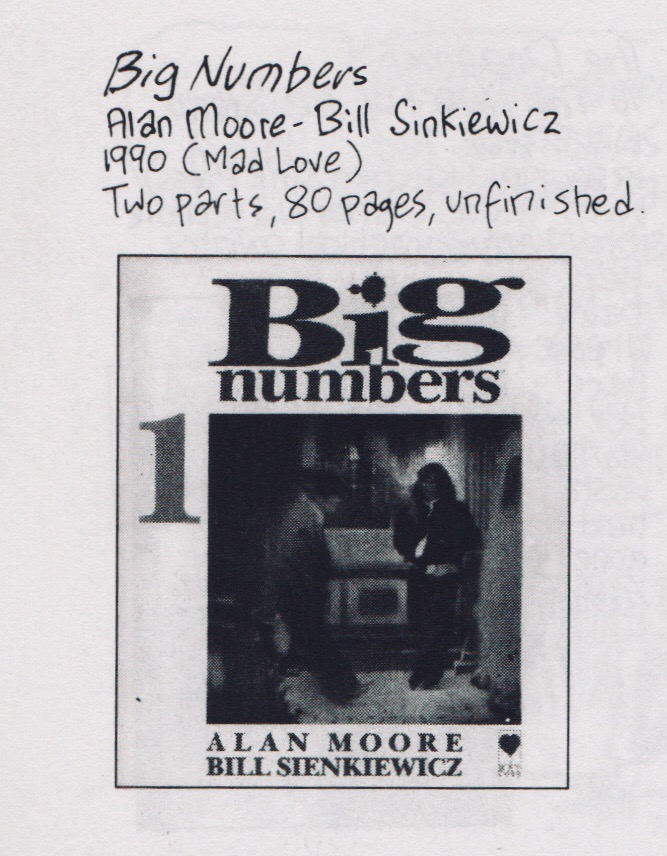 Campbell includes a trio of Love & Rockets novels. Poison River is the first one I read. I was a junior in high school; I checked it out from the public library. Somehow my mother saw it, flicked through it, and was mortified.

Campbell seems to split the difference on Dave Sim’s Cerebus, including critical favorite Jaka’s Story along with the later novel Going Home (which sees Sim trying to reign in the project and steer it toward a conclusion). (Nobody asked me but I would’ve included Church & State and Church & State II).

Joe Sacco’s comix-journalism is excellent, and Campbell includes both Palestine and Safe Area Gorazde. These “graphic novels” (they aren’t really graphic novels, except that they are) expanded what was possible not just in comics, but also in journalism. 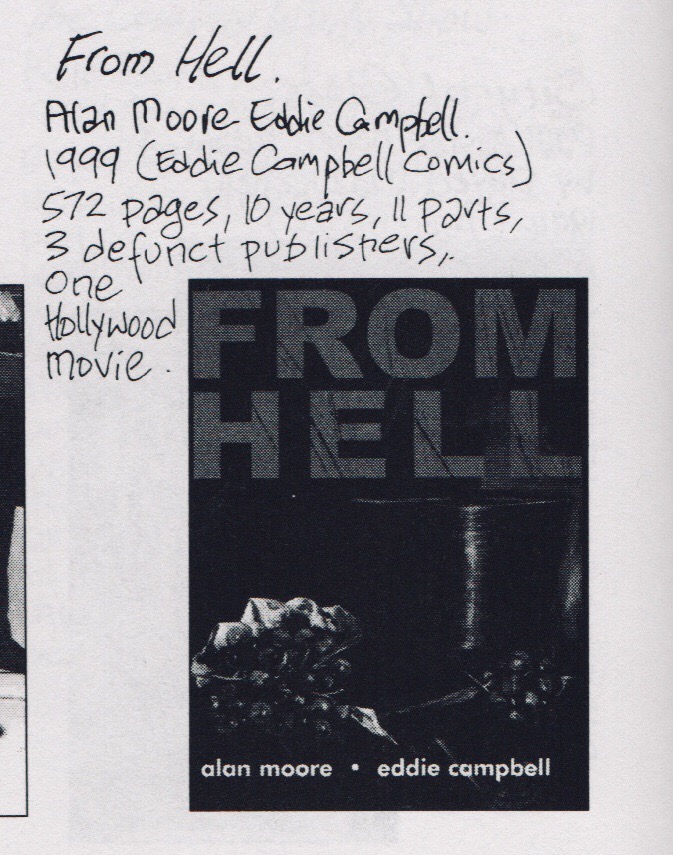 From Hell isn’t the only one of his own works that Campbell includes on his list—he also includes another Alec novel, The King of Canute Crowd. I love the gesture—an artist fully assured of the qualities in his best work. For the record, if pressed to name “the best graphic novel” I would probably immediately say, “Oh, it’s From Hell of course” (and then hem and haw and hedge, bringing up Chris Ware’s Building Stories, the first half of Sim’s Cerebus project, David Mazzucchelli’s Asterios Polyp, Love & Rockets, etc.). 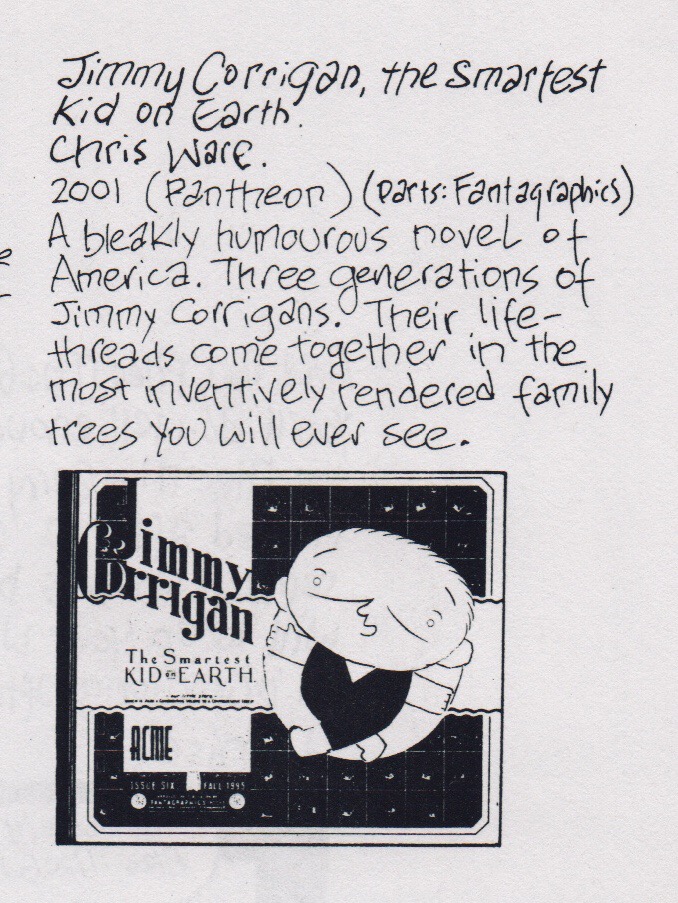 Chris Ware’s Jimmy Corrigan shows up on the list, of course. I’m sure Building Stories would be on here too—along with dozens of others—if the list were updated. Indeed, Campbell’s canon (my term, not his), ends with this disclaimer:

When the Wind Blows, Raymond Briggs, 1982

The Death of Speedy, Jaime Hernandez, 1989

The New Adventures of Hitler, Grant Morrison and Steve Yeowell, 1990