[Ed. note: I originally wrote and posted this review in January of 2012. My kids were four and one at the time. This morning, my daughter finished the edition of A Wrinkle in Time I reviewed here, reading the last hundred pages or so in a marathon sitting so we would take her (and her brother) to see Ava DuVernay’s film adaptation today. I’ll try to post some thoughts on the film later today.]

Madeleine L’Engle’s seminal fantasy novel A Wrinkle in Time turns 50 this year, and publisher Macmillan is celebrating by releasing a new anniversary edition with oodles of extras, including photos, manuscript pages, and new editorial content. They’ve also initiated a “50 Years, 50 Days,  50 Blogs Celebration Campaign” to promote the new book, and they asked Biblioklept to participate in the first week.

Here is the new cover: 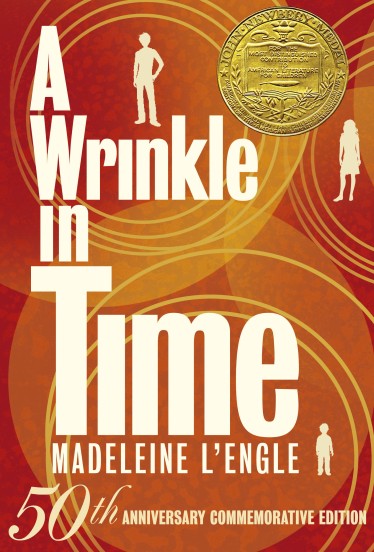 And here is the cover to my beloved, ragged edition: 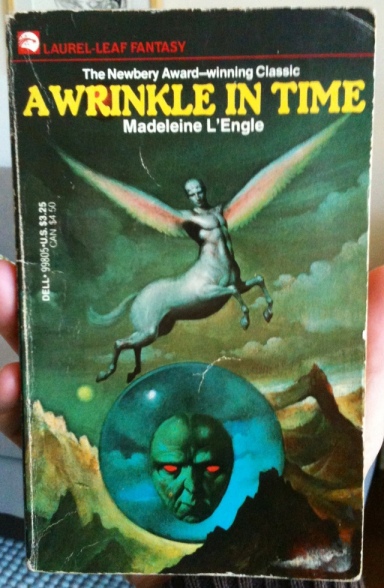 A Wrinkle in Time explores the strange intersections of space and time against a backdrop of adolescent angst. Our intrepid heroine Meg, her child genius brother Charles Wallace, and her would-be beau Calvin O’Keefe, go on a trans-dimensional quest to find her missing physicist father. They are aided (and initiated into) this quest by a trio of immortal women (shades of the Norns); their intergalactic mission finds them encountering angelic centaurs, motherly tentacled beasts, a red-eyed automaton, a disembodied brain, and more more more. Dr. Dad has disappeared while working on a mysterious project involving a tesseract.

Here’s a nifty visualization of the tesseract:

Like a lot of young people, as a child I was deeply fascinated by the concept of “tessering” away to a strange, marvelous, dangerous place, and it was surely this idea that most enthralled me as an early reader of the novel. I was probably ten when I first read the book, which I’m pretty sure was a gift from my aunt who brought it to me while our family was living in New Zealand. I actually wrote my name and our six-digit phone number into the book, which suggests that I loaned it out quite a bit.

A Wrinkle in Time gelled with all of the stuff I was reading then: lots of Tolkien, C.S.Lewis, and Douglas Adams, but also plenty of crappy Dr. Who novels and lots of execrable fantasy novels. L’Engle’s novels (of course I read all of them after reading Wrinkle; to this day, Many Waters is probably the one that stands out the most, weird and sexy as it was) were of a piece with Tolkien and Lewis (especially Lewis’s oft-overlooked space trilogy)—but there was something distinctly American about L’Engle’s characters—her writing even—that intrigued me. I had spent my entire childhood expatriated and was constantly looking for avenues of American expression, ways “to be American” (yes, I realize how silly that sounds now).

In retrospect, it’s not the tesseract and its fantastical properties that I so recall from A Wrinkle in Time so much as it is L’Engle’s characters, especially mercurial Meg and her future-husband Calvin. While much of literature emphasizes the clash between individual desires and societal conventions, L’Engle’s particular tone and characterization is keenly sensitive to the difficulties adolescents face navigating this conflict. In a sense, L’Engle is working out the early blueprint for what would become the conventions of Young Adult literature. L’Engle wrote a specific brand of sci-fi/fantasy that, on the surface, sets her apart from S.E. Hinton and Robert Cormier—but what these writers share in common, what makes their work so enduring even as society changes, is the essential emotional reality their characters share with readers.

Wrinkle endures also because of its handling of complex themes of conformity, idealism, faith, and science. It’s a book that challenges a youngish audience to read in new ways. It’s also a frequently challenged book—always the sign of something good—suggesting that it’s not going anywhere soon. In this sense, Wrinkle’s literary legacy externally recapitulates its internal themes of nonconformity.

Of course, characterization and strong themes probably wouldn’t get too far with young readers if Wrinkle didn’t deliver the goods that YA readers demand: a good yarn. Wrinkle is spry and engaging at fifty, and while it’s not as bloody as new kid on the block The Hunger Games (the protagonist of which owes some small debt to Meg Murray) it nevertheless negotiates the dangers of existence (both physical and metaphysical) with greater emotional intensity.

But I’ve veered off course here, invoking a newer, more violent YA star at the end of my riff, when what I really want to do is encourage young people who haven’t read Wrinkle yet to pick it up (okay, especially young people who think that Collins’s trilogy is the bee’s knees). It’s a wise, endearing, and enduring classic, one that deserves attention on its golden anniversary.

2 thoughts on “(Revisiting) Revisiting A Wrinkle in Time”