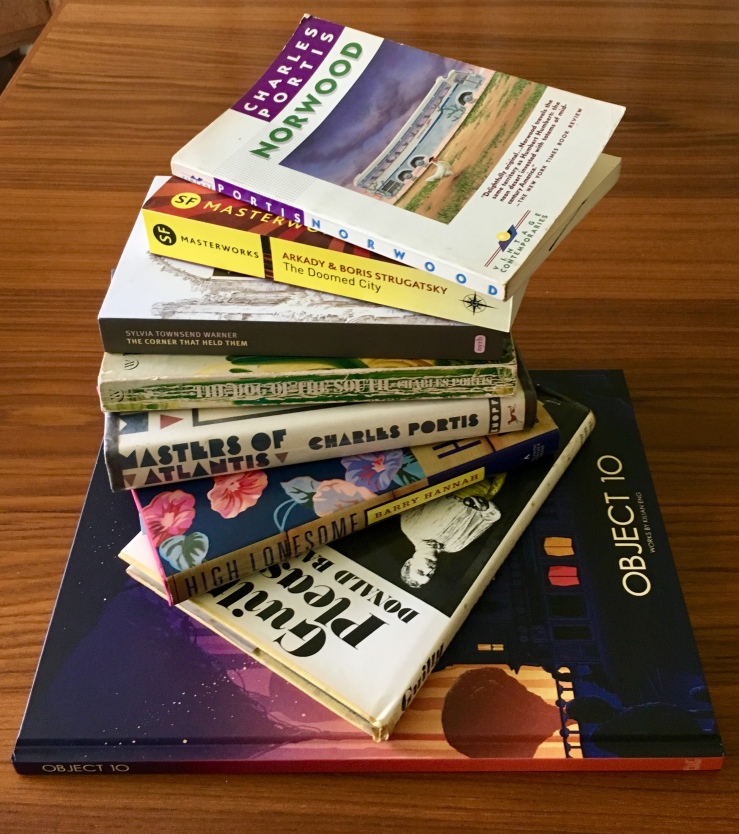 My family and I spent a wonderful week in Oregon at the end of July. We visited friends who live in Portland, where we based our stay, and we drove to the coast, to Mount Hood, and to all kinds of beautiful places. It was really fucking lovely.

Among all the gardens and forests and breweries and record shops, we managed to fit in some bookstores too, of course.

The first was Melville Books, right off of Alberta Street, tucked away just a bit. Our rental house was a block from Alberta, and we got there early in the afternoon and took a stroll. Melville Books is pretty new. The owner-proprietor was making a wooden “Open” sign while he chatted with me about his stock and his experiences scouting and buying used books. He was really friendly, and the small store was very well curated. 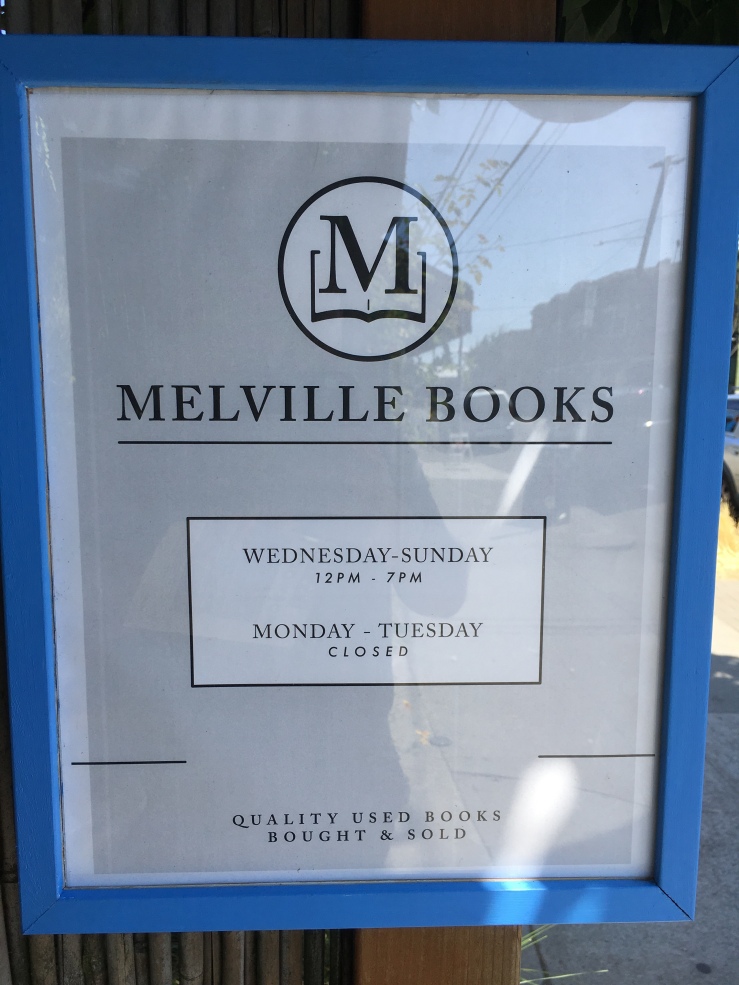 I picked up Charles Portis’s first novel Norwood there on something of a whim. I’ve never read Portis, but I know his fans love his stuff, and I couldn’t pass up the Vintage Contemporaries cover. There was also a hardback copy of True Grit in stock at Melville that I now regret not having picked up. Norwood is hilarious, and has evoked in me a need to read more Portis.

I actually went to my local used book store today to get some stuff for my kids (and maybe just to get out of the house), but the only copy of True Grit they had in stock was a Coen Brothers film adaptation tie in. I did pick up copies of Masters of Atlantis (in hardback) and The Dog of the South though. 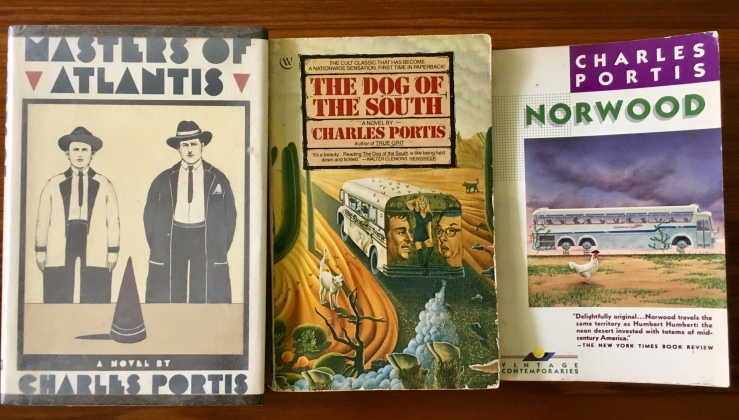 We also visited Powell’s, of course. I wasn’t expecting it to be as big as it was. Powell’s is a very well-stocked general bookstore, but I was a little disappointed that I couldn’t find more weird or rare stuff there (I think my local place, Chamblin Bookmine, has spoiled me). 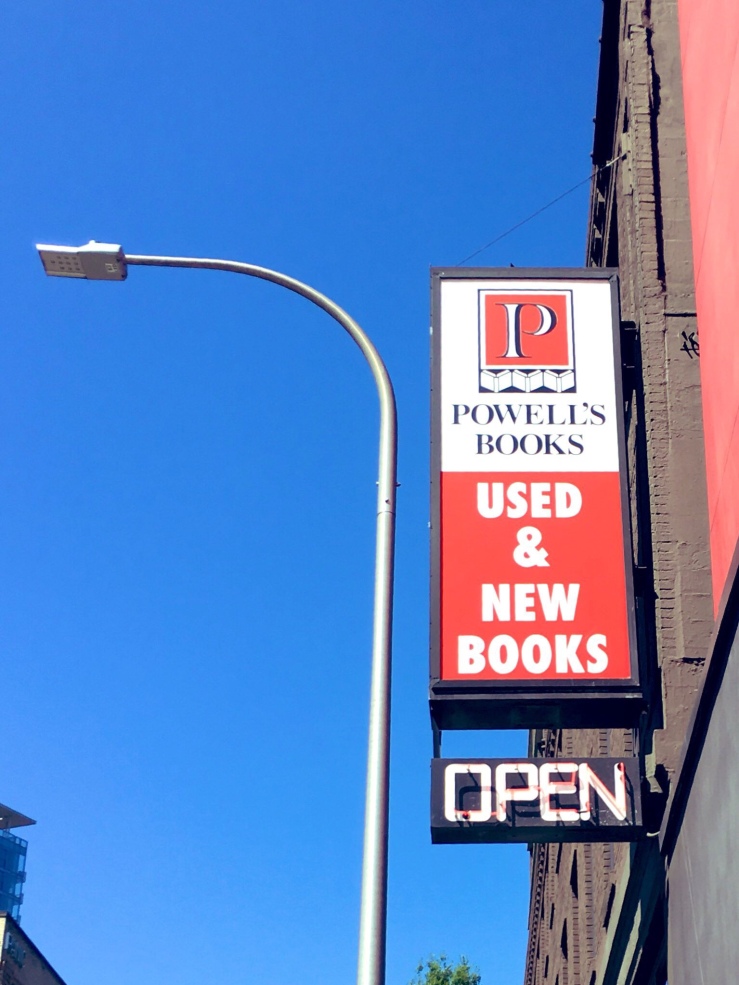 I picked up a first-edition hardback of Donald Barthelme’s “nonfiction” collection Guilty Pleasures for just a few bucks. 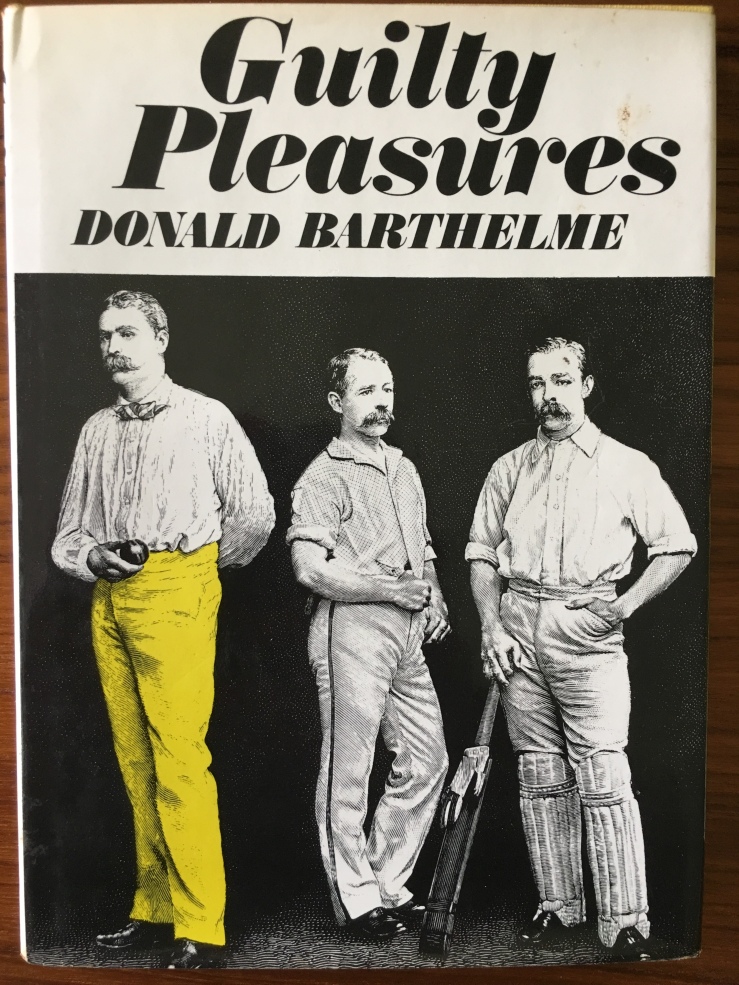 It includes one of my favorite Barthelme pieces, “Eugenie Grandet.” It also includes quite a bit of his collage work. 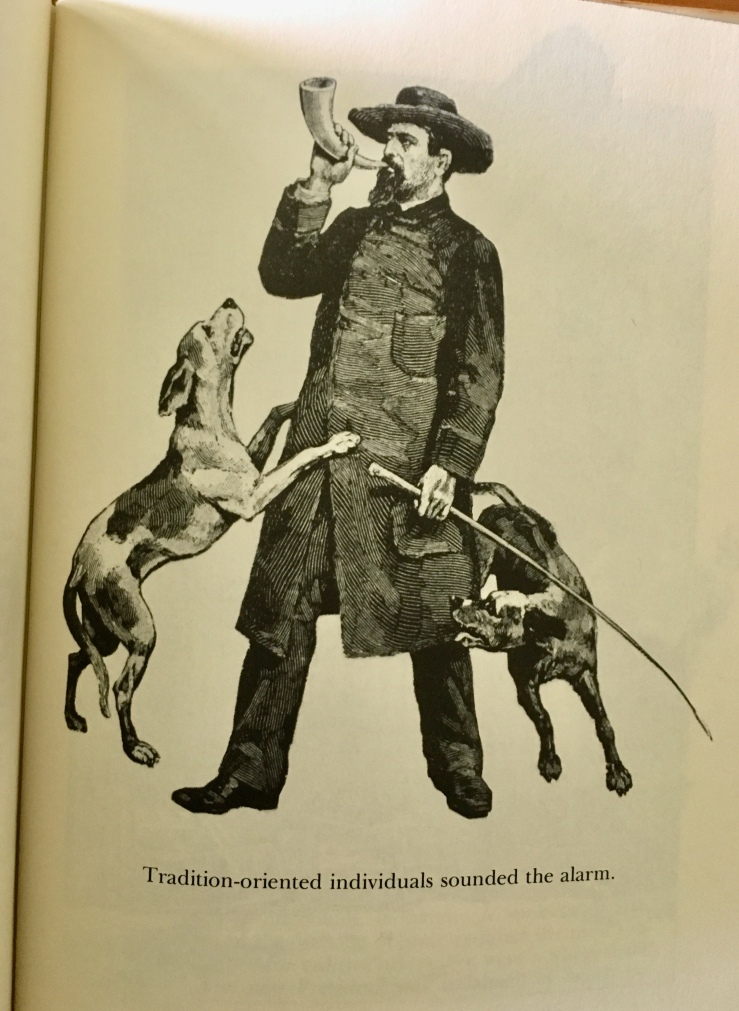 I also picked up a hardback copy of Barry Hannah’s High Lonesome. I’ve read a lot of the stories in here (collected in Long Lost Happy), but some are unfamiliar. Also, the cover is by the photorealist painter Glennray Tutor, a Southern contemporary of Hannah’s. Tutor did the covers for several other Hannah volumes. 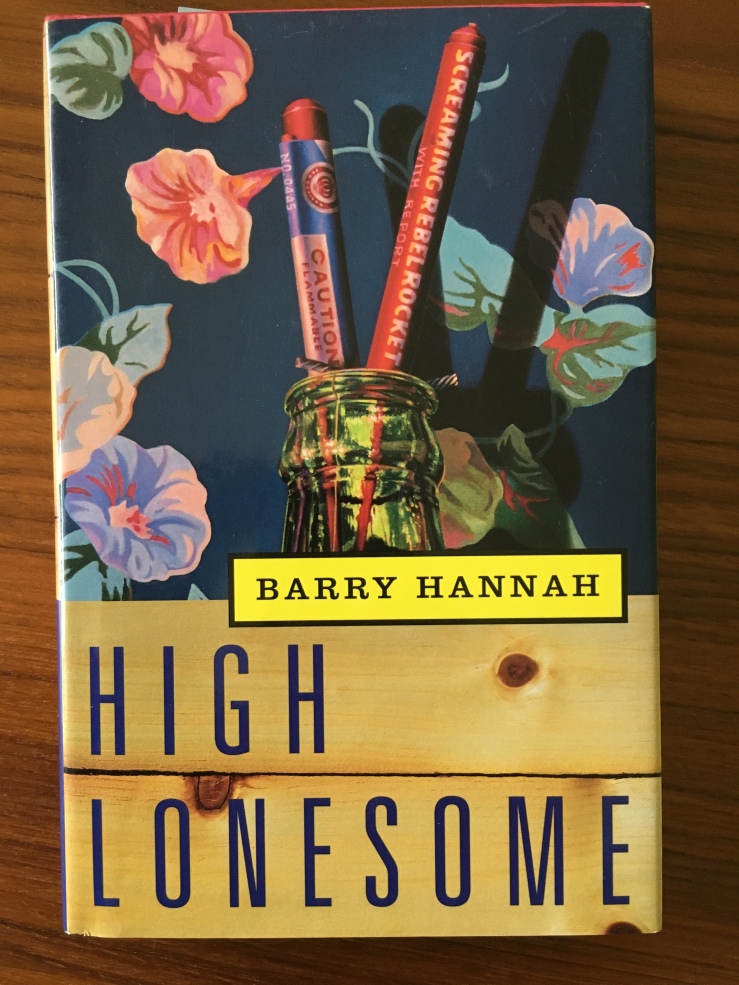 Over in the sci-fi section of Powell’s I found some books by the Strugatsky brothers, which I’ve been into lately. I’ve heard Monday Starts on Saturday is good, but the cover for this edition is so godawful bad that I couldn’t go for it. That’s what library e-books are for, I guess. (Really though, a blank white cover would have been better.) 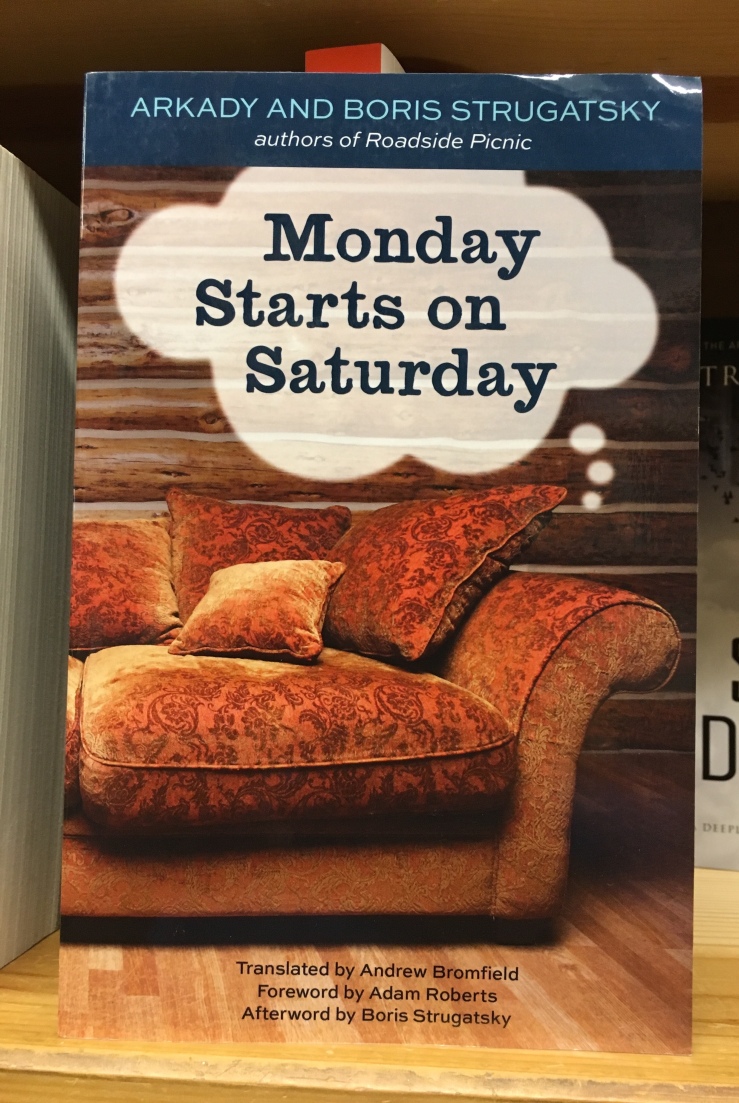 I ended up picking up The Doomed City instead, which I might try to squeeze in before the end of summer. 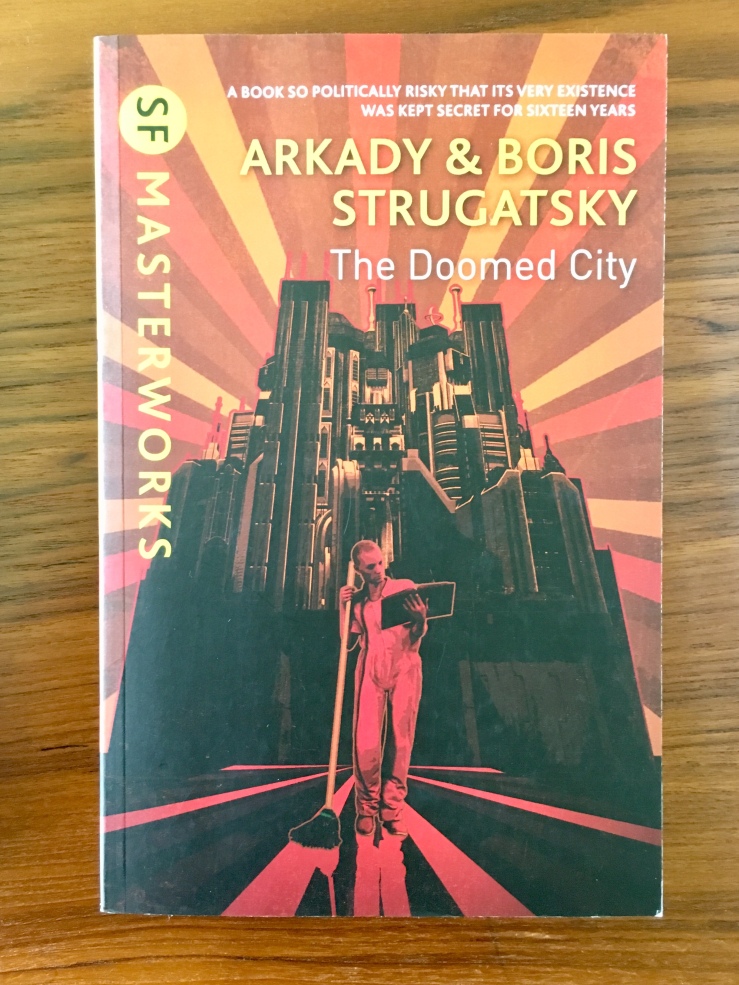 I was impressed with the art books collection at Powell’s but also disappointed not to find anything by Remedios Varo or Leonora Carrington, other than recent editions of their fiction—no real art books though. I was happy though to see a shelf recommendation for Margaret Carson’s recent translation of Varo’s Letters, Dreams & Other Writings though. I sent a pic to Margaret, who was really generous to me with her time in recent interview about her translation. 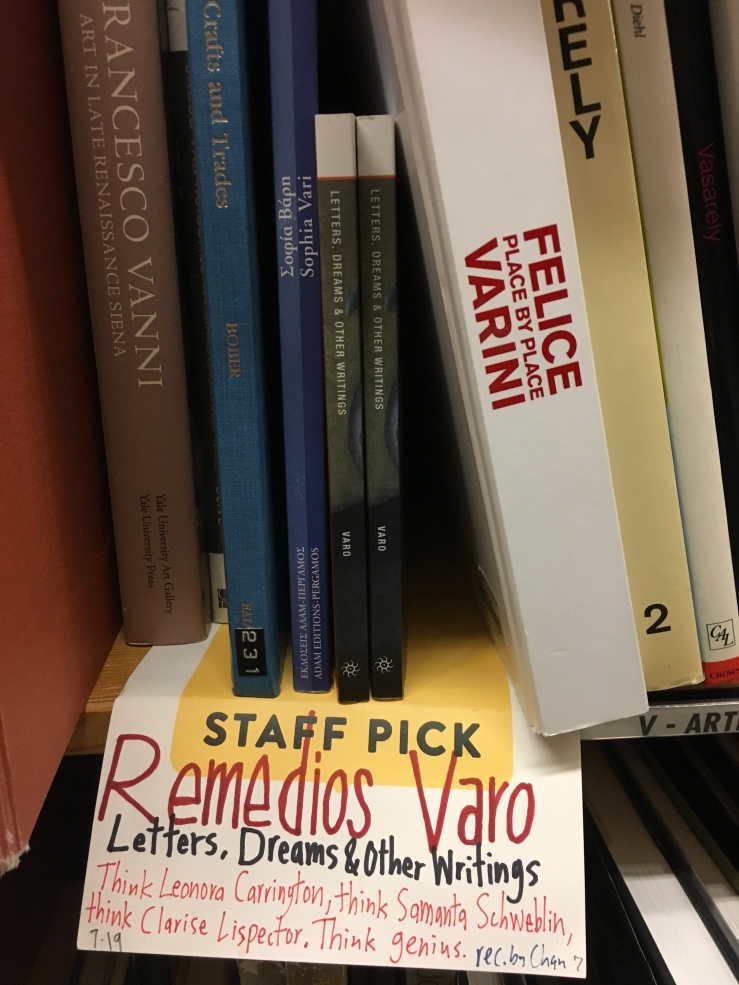 I visited a few other bookshops, not so much as destinations, but rather in happy accidents in the neighborhoods we visited—but I restrained myself from picking anything else up. (And no, I didn’t make it to Mother Foucault’s, unfortunately, although many folks told me to. Next time.)

We visited Floating World Comics the same day as Powell’s, where I picked up a copy of Kilian Eng’s Object 10. I’ve been a fan of Eng’s for years, sharing his images on the blog and following him on Instagram. I hadn’t realized though that Floating World was his publisher. Object 10 is lovely. 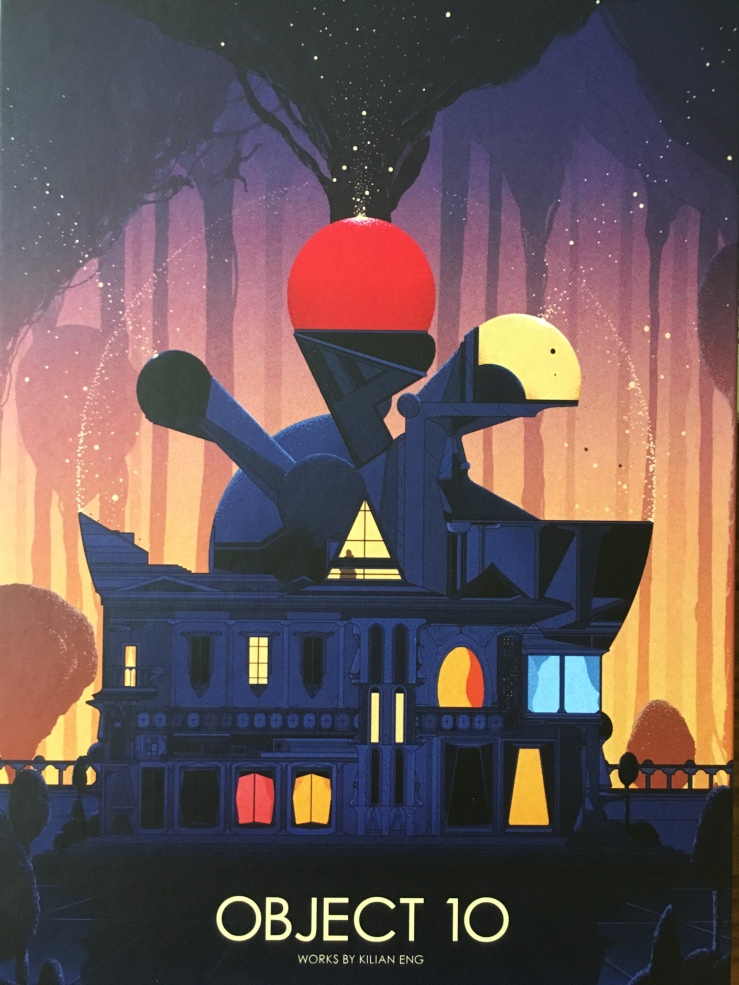 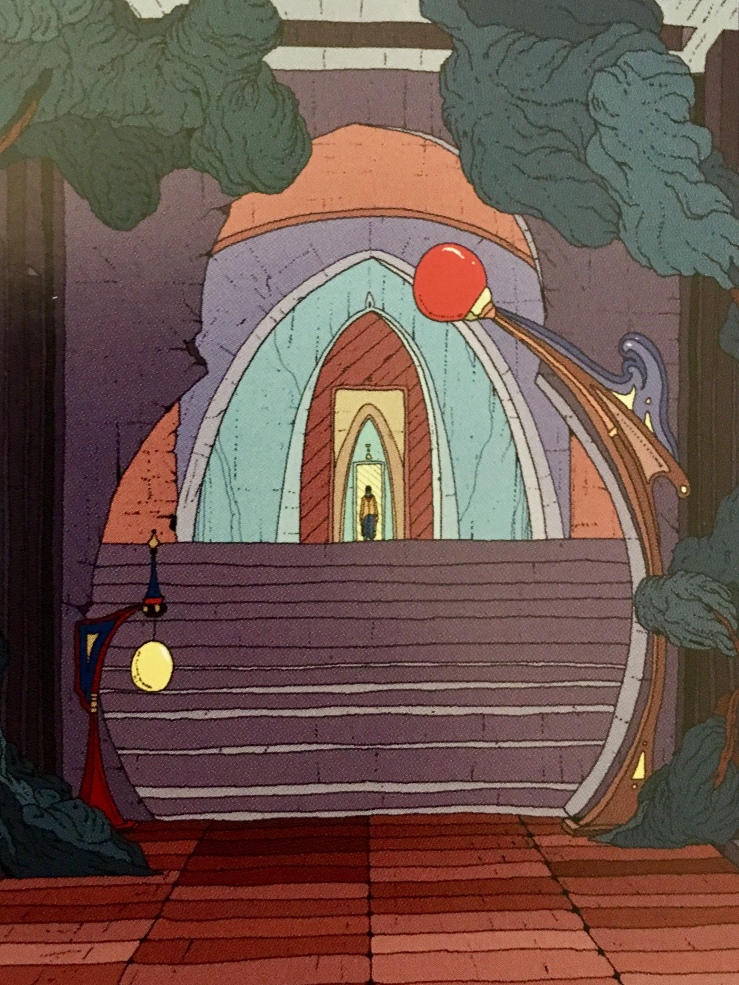 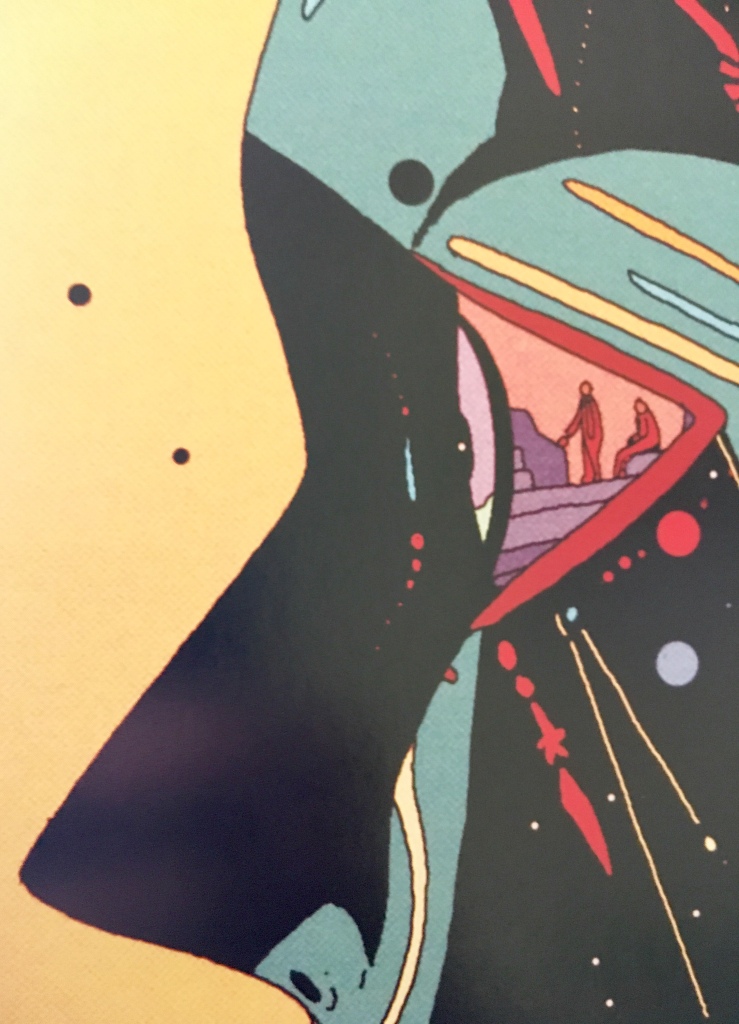 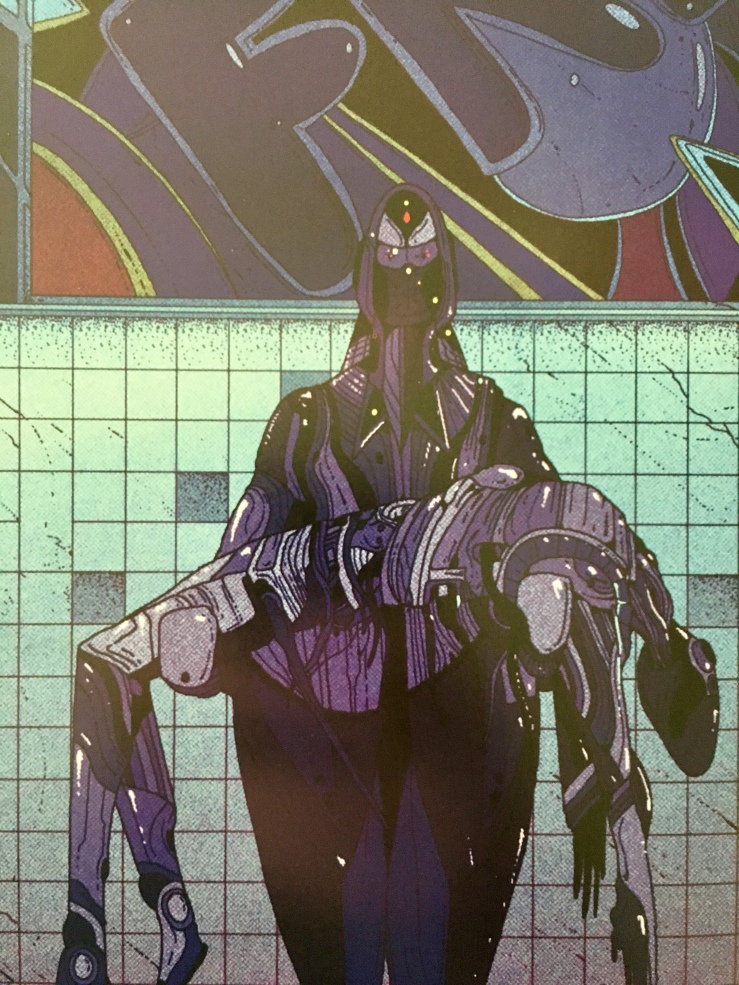 I also picked up a pack of 1993 Moebius trading cards there for a dollar. I haven’t opened them yet though. Saving it for a treat later. It was neat to see copies of Anders Nilsen’s Tongues in the wild, too. I had reviewed the title awhile back for The Comics Journal, but I hadn’t realized that Nilsen lived in Portland. We also checked out Bridge City Comics on Mississippi, which had a nice selection of dollar comics that I indulged my kids in.

Portland was fantastic in general. The only real disappointment came when we visited the Portland Art Museum expecting to see a major Frida Kahlo exhibit. Unfortunately, we misread the dates—the show starts next summer. The museum has a nice collection though. Just a few pics of some pieces I liked: 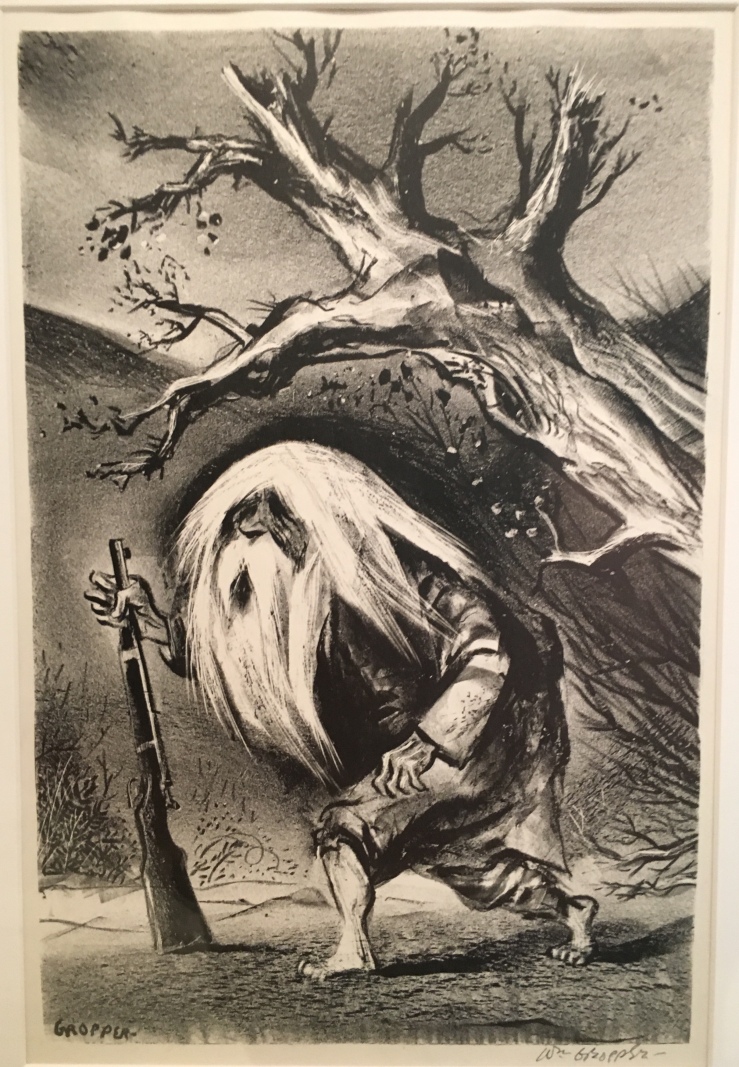 The Fair Captive (1948) by Rene Magritte 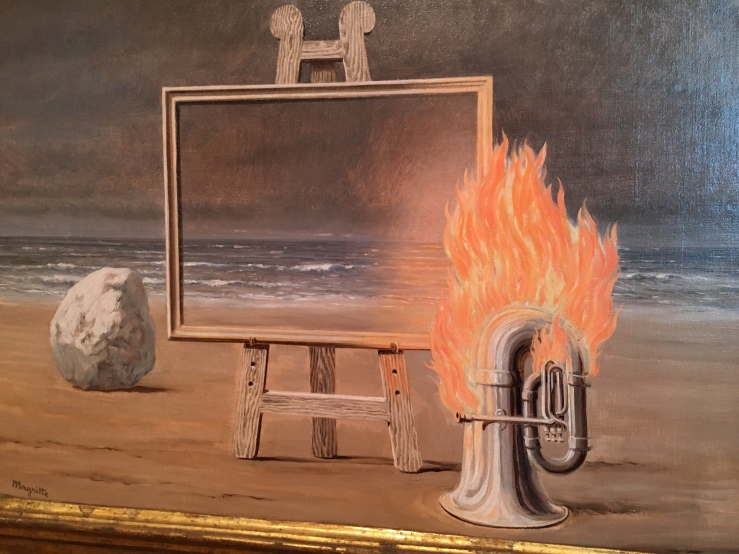 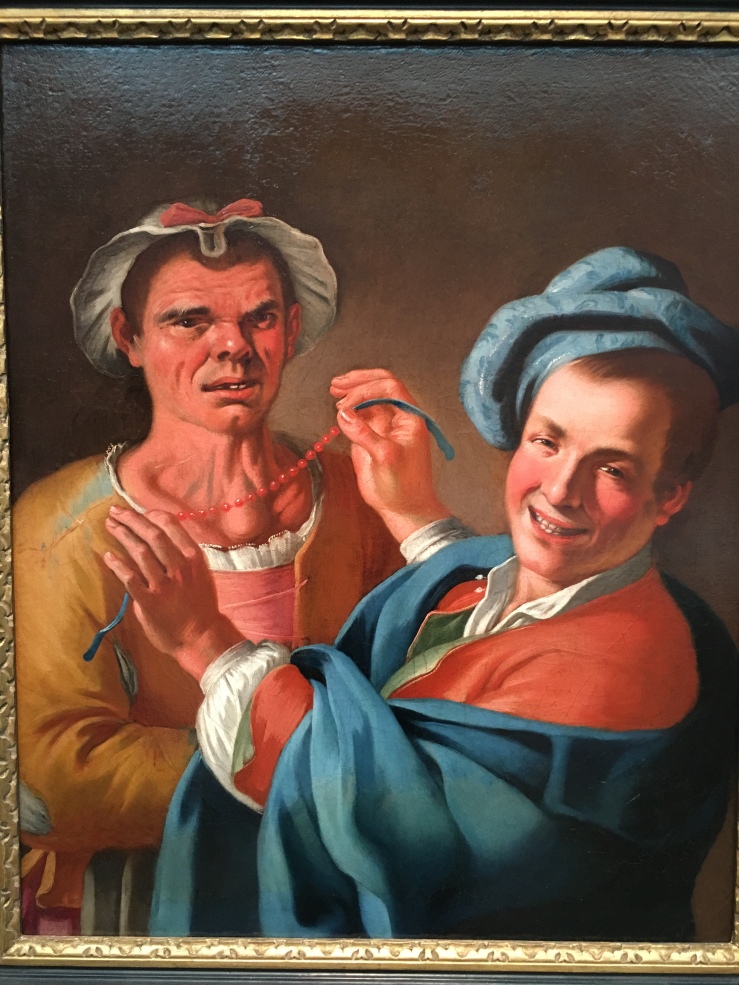 Here’s the museum’s description of this unusual painting:

Owing to widespread social prejudice, cross-dressing was rarely depicted in European art until the modern era. This recently discovered painting from the mid-eighteenth century is a testament to the exceptional and long-standing acceptance of cross-dressers known as femminielli in the great Italian city of Naples. The term, which might be translated “little female-men,” is not derogatory, but rather an expression of endearment. Femminielli come from impoverished neighborhoods, as is evidenced by this individual’s missing tooth and goiter, a common condition among the poor in the Neapolitan region. Although femminiellicross-dress from an early age, they do not try to conceal their birth sex completely. Rather than being stigmatized, they are deemed special and are accepted as a “third sex” that combines the strengths of both males and females. In particular, femminielli are thought to bring good luck, so Neapolitans often take newborn babies to them to hold. Femminielli are also popular companions for an evening of gambling. This association is represented by the necklace of red coral, which is similarly thought to bring good fortune. Neapolitan genre paintings (images of everyday life) frequently feature a grinning figure to engage the viewer. Here, we are invited to consider the artist’s playful inversion of traditional views of gender, which contrasts the pretty young male with the more masculine femminiello.

Maybe we’ll get back to the Pacific Northwest next summer and see the Kahlo then.

Like I said, I went to the bookstore today, not looking for myself (promise!) except that I did stop and browse Portis briefly, picking up the aforementioned copies. When I got home, I had a package from NYRB containing The Corner That Held Them by Sylvia Townsend Warner. It immediately interested me when I flicked through it—seems like a weird one. NYRB’s blurb below; more to come. 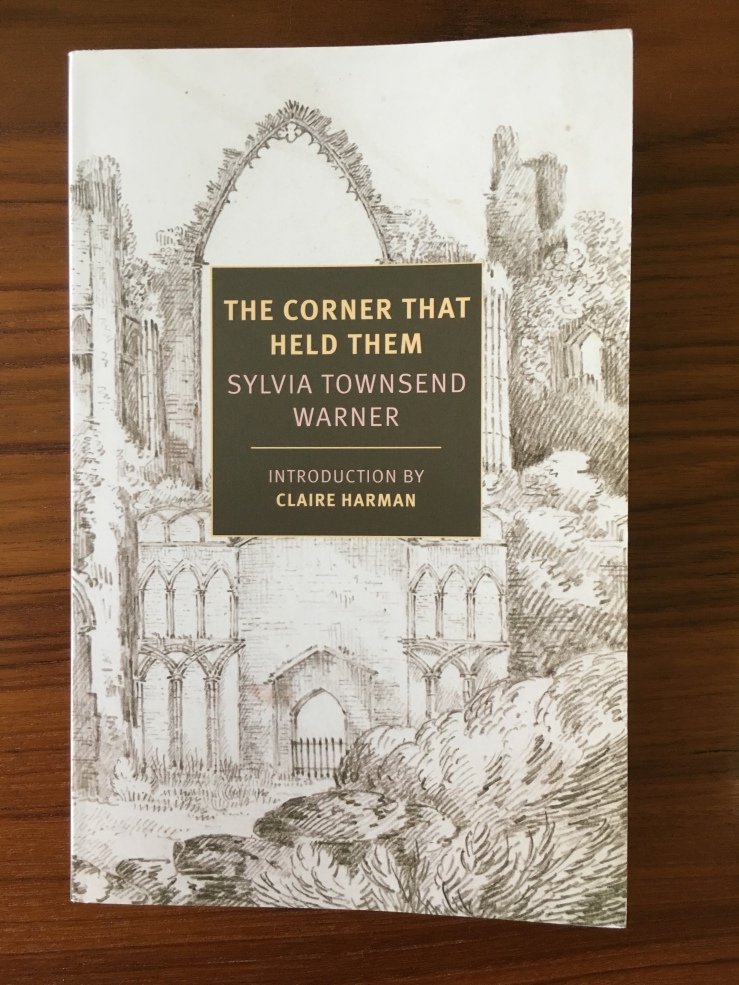 Sylvia Townsend Warner’s The Corner That Held Them is a historical novel like no other, one that immerses the reader in the dailiness of history, rather than history as the given sequence of events that, in time, it comes to seem. Time ebbs and flows and characters come and go in this novel, set in the era of the Black Death, about a Benedictine convent of no great note. The nuns do their chores, and seek to maintain and improve the fabric of their house and chapel, and struggle with each other and with themselves. The book that emerges is a picture of a world run by women but also a story—stirring, disturbing, witty, utterly entrancing—of a community. What is the life of a community and how does it support, or constrain, a real humanity? How do we live through it and it through us? These are among the deep questions that lie behind this rare triumph of the novelist’s art.

10 thoughts on “Blog about some books acquired”