Okay. This is it. I promise.

This is the last post (for now, anyway, of course, I mean of course it’s not going to be the last post on him, of course) about David Foster Wallace. I’ll get back to reviews and whatnot next week. Swear. But I need to transition here, comment on the past week, move on–

–I’ve always despised the word closure. It’s a pop-psychobabble concept used to denote a social-cultural imposition of order and telos upon an individual’s right to experience the world (and all the loss and violence and ugliness experiencing the world entails) as ambiguous and chaotic and open-ended. But I guess in all likelihood, for anyone who’s endured personal tragedy, there must be some comfort in organizing the loss, fitting it into the narrative of their life, etc. This is the traditional project of literature, is it not–turning loss and tragedy into a plot, into something meaningful and productive? (At least that’s what Aristotle said . . .)–

But I’m already off to a rambling start. I’ve spent the past week obsessing over eulogies and elegies, memories and anecdotes, notes and ephemera (an no real information). I’ve read old reviews that angered me. Trolls have gotten my goat. I’ve realized that the easiest charge for an anonymous dick to make about an author they haven’t bothered to read is that that author is overrated. I’ve felt the slightest sting of jealousy that I never got to hear DFW read personally. I’ve been derailed, permanently it seems, or at least for quite a while, from Roberto Bolaño’s novel The Savage Detectives (this is particularly painful, as I was over 200 pages in to the thing). I’ve initiated a third attempt at a second complete reading of Infinite Jest. I’ve spent every lunch of my work week discussing po-mo lit with the only colleague of mine who’s actually read Wallace. He made me get a copy of Gaddis’s The Recognitions: when the hell will I have time to read it? It’s like, a 1000 pages long! 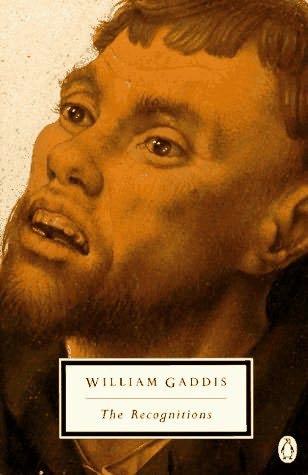 Most of all, though, I’ve felt shocked; shocked in a thoroughly Wallacian way; shocked in a way-too self-aware mode of shocked behavior: I’m shocked and saddened at how shocked and saddened I am. I did not know that I had the capacity to feel so upset about the death of someone who I did not know, and I feel silly, even embarrassed about this shock, even as I write about it here, publicly, for no real reason. This is the worst kind of solipsism of course. But right now, I feel unable to comment on how Wallace translated the pain and loneliness of life into the language of empathy–all while pointing out how such empathy was, like, impossible (it’s all just language, y’know?). Wallace’s writing always went beyond the sort of navel-gazing and arch irony often identified with other writers of postmodern meta-fiction–he always communicated with his audience. He once stated that “no conclusion could be more horrible than solipsism” (he was referring to his hero Wittgenstein here, arguing that language was a “game” to be played, and thus required more than one “player”; hence, something must exist beyond one’s own mind–there is connection, something beyond the self). If Wallace realized this, that communication, and thus community was possible, at least in his fiction (much of it, yes, is very dark, even morose at times), why did he kill himself? This seems an unproductive question to ask. I take it back (even while I leave it there).

It is maddening. The question arises again and again: “Did he leave a note?” Did David Foster Wallace write something, you ask, that might tell us why he killed himself? Ahem. Ahem. “The Depressed Person.” “Good Old Neon.” James Orin Incandenza aka Himself (and all the other characters who attempt, explicitly or tacitly, to off themselves in IJ). The answer to the question, then, is he left a lot of notes. But none of them will satisfy. None of them will explicate. They can’t (that was the whole point of Infinite Jest, the point missed by critics who thought the book had no conclusion). And it is maddening. And it provides no closure. But at least we have the books, the words, the ideas. Thanks.

3 thoughts on “No Conclusion Could Be More Horrible than Solipsism”