Terrence Malick’s beautiful, moving new film The Tree of Life explores humanity’s need to find metaphysical, spiritual, or psychological solace in a physical, natural, phenomenal world whose God remains silent, if not absent. The film begins by quoting the Book of Job: “Where were you when I laid the earth’s foundation . . . while the morning stars sang together and all the sons of God shouted for joy?” The line is God’s rejoinder to Job’s despair, a non-answer that recalls God’s response to Moses in Exodus when Moses asks his name and he replies: “I am that I am.” God is tautological; there is no analogy, no metaphoricity for God. Similarly, as in Job, it is not for us to understand God’s creation; rather, we are part of its mystery, and part of that mystery is to find meaning against a Darwinian backdrop. Malick’s project in The Tree of Life is to find meaning—but not explanation—through the beauty, grace, and the glory of nature, even as the film acknowledges the violence, injustice, and inconstancy of the natural world, a world that will never directly answer existential questioning.

The film begins with the O’Briens learning that one of their three sons has died. He is only nineteen years old, and the grief of his early death overwhelms his parents; it also casts an ever-present existential gloom over his brother Jack, who will become the ersatz protagonist of the film. Jack (portrayed as an adult by Sean Penn) is an architect in a big city. On a day that seems particularly freighted with significance—perhaps his brother’s birthday or deathday—he is unable to communicate with his wife or colleagues. Through Malick’s trademark interior-monologue whispers, Jack questions God again and again, trying to find meaning in his brother’s death.

In what may or may not be a daydream of Jack’s, the film then undertakes representing the creation of the universe, the expansion of galaxies, the formation of our own planet, and the subsequent life that evolves there. The segment is breathtaking, overwhelming, and worth the price of admission alone. In one shot, a giant dinosaur lies beached; the camera pans to reveal his side bloodied and bitten. The film then cuts to a shot of hammerhead sharks swarming in the deep. This Darwinian depiction is echoed and then contrasted in another shot, as one dinosaur finds another, of a different species, dying on a riverbed. The first dinosaur places his foot over the second’s neck, but then chooses not to kill the dying dinosaur, who struggles for life. There are perhaps two attitudes here toward life, one which is essentially a Nietzschean will-to-power, and the other Jesusian, an impulse born of empathy, identification, and ultimately radical love.

These contrasting ideals are embodied in Mr. and Mrs. O’Brien, and showcased in the next segment of the film, which is likely part of Jack’s memory, or maybe more accurately the idea of Jack’s memory. In a rushing flow of images and music, Malick captures the deep beauty, excitement, and confusion of early life. The episode might find a literary analogy in the early chapters of Joyce’s A Portrait of the Artist as a Young Man, which also attempts to show what early consciousness might be like. Malick’s syntax is typically Malickian, yet it fits its subject better here than it did in The New World or The Thin Red Line. The life of the young family is overwhelming in its natural beauty; however, the context of one of the boy’s impending death begins to throw shadows over the beauty. Thus we have the central apparent philosophical problem of the phenomenal world—what does it mean to die? This question in turn entails another—what does it mean to live?

For Mr. O’Brien, life is a Darwinian contest: “You can’t be too good,” he admonishes his boys. He keeps an ever-present stern hand around the back of Jack’s neck. The gesture is deeply ambiguous: it is at once a loving father’s guiding hand and at the same time a choking, killing noose. Mr. O’Brien dreams of becoming a big man, a successful man, a wealthy man. He is strict with the children, and instructs them toward a philosophy of self-reliance that is more Nietzsche than Thoreau. In contrast, Mrs. O’Brien takes a loving, playful, relaxed approach to her children (and life in general). She evokes something of a nature spirit, an earth mother able to recognize the beauty and glory in each transient moment. Where Mr. O’Brien grieves the could-have-been and pines for the will-be, Mrs. O’Brien finds meaning in the evanescent inconstancy of life. 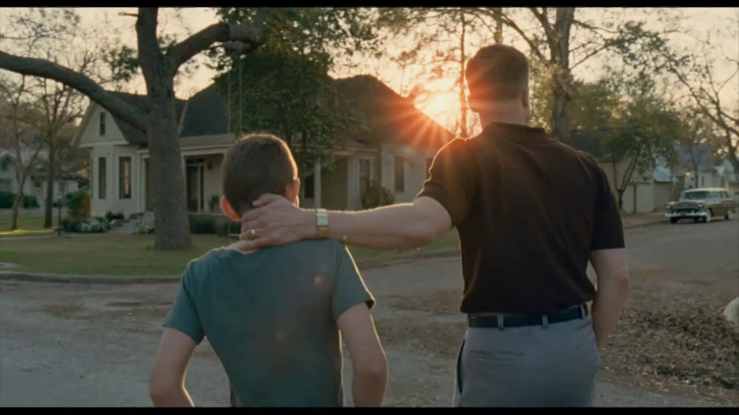 These contrasting views come to a head as Jack approaches puberty. The film slides into an understated Oedipal drama. After a friend of the boys drowns, Jack wonders why he should be good if God isn’t. The Oedipal drama is thus capitulated not just at Jack’s parents, but at Jack’s internalization of a God-figure, which he dallies with rejecting, or at least defying. He becomes cruel at times to his brothers. He assaults an animal. He breaks windows. He sneaks into a neighbor’s house and (implicitly) masturbates over a piece of lingerie, after which shame and anger drives him to flee. In a painful, short scene, he acknowledges that he’s changed, that he can no longer talk to his mother. Jack pines for his lost innocence (“Why can’t I be like them again?” he asks God, presumably referring to his younger brothers), realizing that his isolation and loneliness is part of a larger existential dilemma.

Malick here complicates the earlier innocent joy of his film, acknowledging and dramatizing the deeply ambiguous, confusing, and painful realities of growing up. At the same time, The Tree of Life does not exactly grow dark during these scenes: Malick works to show the beauty of the natural world, of each moment in life, even as those moments are profoundly complicated by morality and personal perspective. Malick’s portrayal of the O’Brien family’s life in Waco, Texas in the late ’50s is rich, detailed, and intricately nuanced. It is real, and much of the credit must be given to the naturalistic performances of the boys (which elide all surfaces of “performance” as such), as well as outstanding turns by Jessica Chastain as Mrs. O’Brien and Brad Pitt as Mr. O’Brien. The real star of the film though might be the cinematographer, Emmanuel Lubezki, who deserves great praise for bringing vibrant life to Malick’s vision.

I have already over-summarized here, when what I really mean to say is: Go see The Tree of Life. Go see it in a theater. It’s beautiful. I will summarize no further, and only add that the film concludes with a metaphysical vision that testifies memory’s ability to give meaning to both life and death. The Tree of Life ultimately suggests that we should love our lives, love our families, and do our best to love existence despite life’s difficulty and inconstancy, despite an apparently indifferent God who will never respond directly to our questions. The film does not attempt then to deflect the grief or explain it away or even to understand it, but rather  to show us that suffering is part of grace and glory, and that there could be  no grace and glory without suffering. Like Frank Capra’s masterpiece It’s a Wonderful Life, which it strongly recalls, The Tree of Life is able to deliver such an apparently simple—and potentially facile—message in a way that genuinely communicates the underlying complexity of such a message. Our lot in life is always Job’s lot; we are always on the path to or from grief—and yet this grief is deserved and appropriate precisely because life is glorious in the first place. Very highly recommended.

7 thoughts on “The Tree of Life — Terrence Malick”