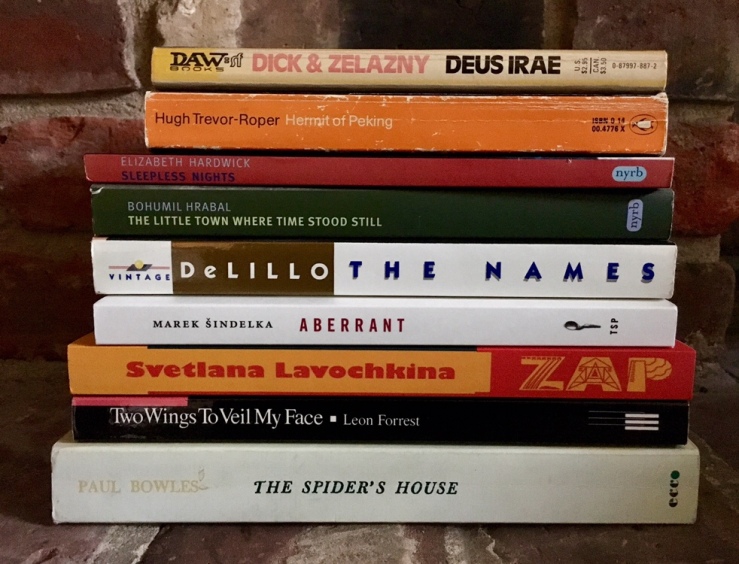 Around the New Year, I usually dig out some shelved books (or books in tbr stacks) to make a good-intentions reading list for the forthcoming year. Here are those books, from top to bottom in the pic above:

Philip K. Dick and Roger Zelazny’s Deus Irae: I picked up the old Daw paperback a few months ago—a habit I’ve gotten into with any old Dick—and haven’t gotten to it yet. I read a lot of PKD in 2017 though, so that mood may carry over into early 2018. Curious about the co-authorship—we’ll see.

I’ll admit that I bought Hugh Trevor-Roper’s Hermit of Peking for its Arcimboldosque cover, but dipping into it back in October intrigued me.

I tried to read Elizabeth Hardwick’s Sleepless Nights a few years ago and got distracted by something else, but a lot of folks I admire have praised it, so I’ll give it another shot this year.

I read, “Cutting It Short,” the first novella in Bohumil Hrabal’s The Little Town Where Time Stood Still, but saved the titular second novella for later. Later is now, or nowish, or down the linish. 2018ish.

I stumbled getting into DeLillo’s The Names a few times last year, so maybe I’ll stumble again, but maybe not.

Aberrant, the début novel by Czech author Marek Šindelka, showed up at Biblioklept World Headquarters at the end of my spring semester when I was swamped with term papers, so it sort of got shuffled aside, but it looks so wonderfully weird that I’ll need to carve out space for it this year.

Leon Forrest’s Two Wings to Veil My Face was on last year’s good intentions reading list (I went 6 of 13 by the way).

Four novels that I want to read that I don’t actually own and will thus have to go buy:

For me:
WAR & PEACE, Tolstoy
THE TUNNEL, Gass
MIDDLEMARCH, Eliot
THE BELL, Murdoch