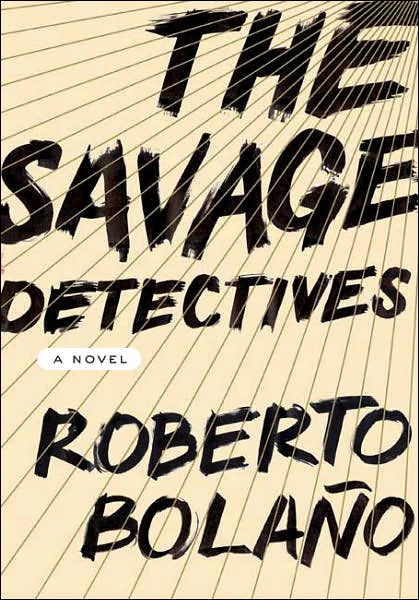 I give up. I don’t know how to review The Savage Detectives.

Everyone told me I was supposed to love this book, but I didn’t. There, that’s a review. Not a good review, but there. I can’t remember a book ever taking me so long to finish or a book that I put down so often. When I truly love a book, I am moved. Often physically. Sometimes I have to stand up to read a book, I’m so moved. That’s a good book. (I never had to stand up during The Savage Detectives, although I often had to force myself to read thoroughly and not just skim). When I truly love a book, I’m a little sad and deflated when it’s over. I know a book is great if I’m compelled to go back and immediately reread sections. (Again, with Detectives, this didn’t happen). But it looks like I’m trashing the book. I shouldn’t. It has a lot going for it.

I read the first 140 pages, the journal entries of young Garcia Madero, in a blur. Funny and passionate, Madero’s voice explodes with the immediacy and intensity of youth. He joins up with the visceral realists, a group of anti-establishment poets (who no one cares about). Led by two enigmatic outsiders, Ulises Lima and Arturo Belano, the visceral realists gripe about the state of Mexican and Latin American literature, screw around, and argue with each other (no one else will listen to them). Madero paints Mexico City in the mid-1970s as vibrant, a place full of poetry and art. He becomes a biblioklept, God bless him (yet he ethically agrees not to steal from a poor old blind bookseller). He writes poems. He has sex. He runs away from home, sort of. There’s a breathless energy to Madero’s narrative that makes the book hard to put down, and the first section of The Savage Detectives, “Mexicans Lost in Mexico” culminates in one of the book’s most exciting events. Madero, Lima, and Belano help a young girl named Lupe escape from her belligerent pimp. Then, that portion of the story unresolved, the narrative shifts dramatically.

In the second section, “The Savage Detectives,” we are treated to, or subjected to, or made to endure, or made to navigate–pick your verb, please–over 450 pages of (one-sided) interviews spanning 20 years. Some of the interviewees appear consistently throughout this section, like Amadeo Salvatierra, who helps Lima and Belano in their quest to find the lost original visceral realist, Cesárea Tinajero. Other voices only pop up once to tell a weird story about Lima or Belano–or more accurately, a weird story about themselves with Lima or Belano playing bit parts. Some of these stories, like Lima’s strange time in a Tel Aviv prison, or Belano’s tenure as a national park guard in France are great; other times they are painfully tedious or repetitive (you know, like real life).

Technically, The Savage Detectives is quite an achievement. The myriad stories in the book’s main section represent the fragmented narratives that might compose a person’s life–a series of perspectives that others have about us, views that can never add up to a unified truth. The bulk of these stories are very much about poetry, art, and travel. Like Joyce’s Ulysses, Detectives is a peripatetic novel, full of specific locations and very, very explicit directions (Joyce famously claimed that were Dublin destroyed in a catastrophe, it could be rebuilt based on his novel; the same seems true for Bolaño’s Mexico City). Also like Ulysses, Detectives is an epic about the banal, ordinary things that fill our lives: jobs and eating and getting to places and having one’s friendships sour and being disappointed and so on. Lots and lots of “and so on.” This isn’t to say that there aren’t moments of heroism and adventure–saving kids from satanic caves, stow-away sea voyages, and dodging bullets from Liberian rebels make for interesting narrative peaks. However, most of the novel remains rooted in a realism that is often dreadfully visceral in its painstaking replication of just how depressing a life could be. As the seventies and eighties turn into the nineties, things get more bleak and more depressing for Lima and Belano. And it all adds up to an incomplete picture (literally; check out the last page of the book if you don’t believe me).

By the time we return to Madero’s journals in the third and final part of the novel, “The Sonora Desert,” the sadness and deflation of the previous section infects and tints every aspect of the narrative. Lima and Belano, with Madero and Lupe in tow, search desperately for the forgotten poet Cesárea Tinajero. Their search works as a pitiful parallel to “The Savage Detectives” section, a comment on the elusive nature of identity, and the strange disappointments that punctuate our expectations. Even the novel’s climactic ending seems understated after the monolithic middle section. And while this deflationary technique is undoubtedly a carefully considered conceit on Bolaño’s part, the payoff for the reader–this reader anyway–did not merit the effort and concentration that the book required. Or, to put it another way, after hours of time invested, I was unmoved.

As rave reviews of the English translation of his last novel 2666 begin seeping out of the critical woodwork (this month’s Harper’s has devoted a full four pages to the book), it seems that Bolaño will top most critics’ lists again this year. At over 900 pages and reportedly full of grim, bleak violence, it’s hard to imagine 2666 will be any easier to get through, and as FS&G summarily ignored our requests for a review copy, there’s no pressing obligation, I suppose. The critical praise heaped on 2666 this year will surely lead interested readers to The Savage Detectives. I think Mark Twain’s infamous note at the beginning of The Adventures of Huckleberry Finn would provide the best warning to these potential readers: “Persons attempting to find a motive in this narrative will be prosecuted; persons attempting to find a moral in it will be banished; persons attempting to find a plot in it will be shot.” While no serious critic could dismiss Bolaño’s lyrical skill and complex control of the many voices that populate Detectives, I think a number of readers–serious readers–would not be wrong for considering the tome a bit overrated.