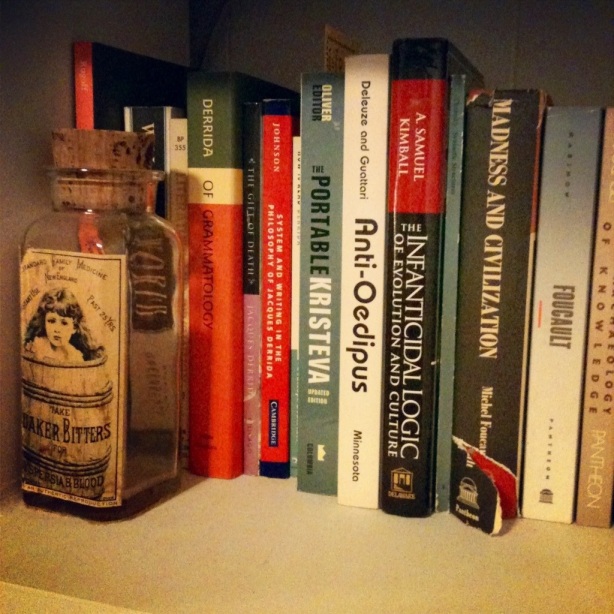 Couldn’t really get a good pic of the whole shelf, so in portions, starting with a spread of postmodernist favorites from years past. Julia Kristeva was a particular favorite of mine in grad school, but her Portable stands up well outside of, jeez, I dunno, theory and deconstruction and all that jazz; there are plenty of memoirish essays, including a wonderful piece on Paris ’68 and Tel Quel &c. Sam Kimball‘s book The Infanticidal Logic of Evolution and Culture still maintains an important place in the way I approach analyzing any kind of storytelling. Love the cover of this first American edition of Foucault’s Madness and Civilization, which I bought for a dollar years ago at a Friends of the Library sale:

I may or may not have obtained the The Viking Portable Nietzsche through nefarious means in my sixteenth year. In any case, it’s not really the best intro (I’m partial to The Gay Science), but it’s not bad. The Plato I’ve had forever. I never finished Bloom’s The Western Canon, although I’ve returned to it many times in the past five or six years, as I’ve opened up more to his ideas. I wrote about many of the books on this shelf, including a few by Simon Critchley.

The book I’d most recommend on this section of the shelf—indeed, the entire shelf—is Freud’s The Future of an Illusion:

The end of the shelf moves into more pop territory, including two good ones by AV Club head writer Nathan Rabin. You might also note Reality Hunger, a book that I am increasingly afraid to go back to, fearing that I probably agree more with Shields’s thesis, even if I didn’t particularly like his synthesis.

Adam Thirlwell’s The Delighted States is an overlooked gem that should have gotten more attention than Shields’s “manifesto.” He shares a bit of Georges Perec (whose writing helped spark this project of mine): 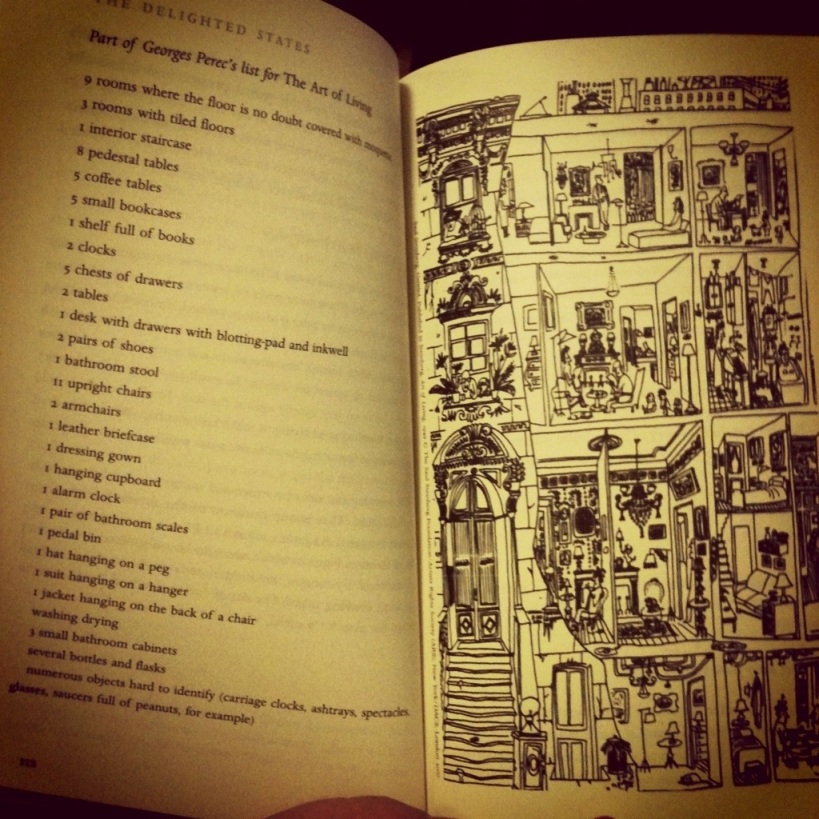 James Wood’s How Fiction Works got my goat:

Like most people who love to read, both academically and for pleasure, I like a good argument, and Wood’s aesthetic criticism is a marvelous platform for my ire, especially in a world that increasingly seems to not care about reading fiction. Wood is a gifted writer, even if his masterful skill at sublimating his personal opinion into a front of absolute authority is maddening. There’s actually probably more in his book that I agree with than not, but it’s those major sticking points on literary approaches that stick in my craw. It’s also those major sticking points that make the book an interesting read. I’d like to think that I’m not interested in merely having my opinions re-confirmed.