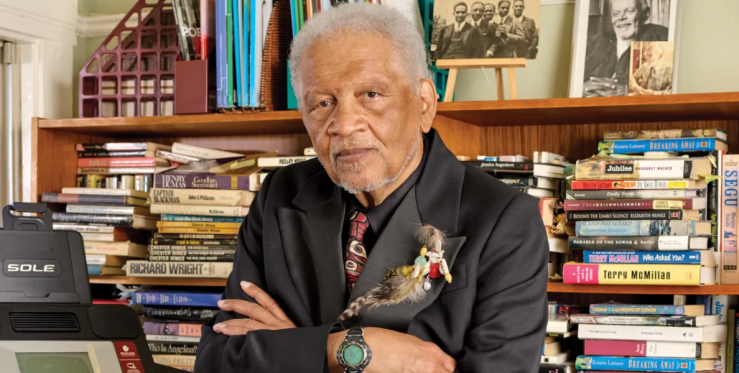 The profile is by Julian Lucas, who does an excellent job covering both Reed’s extensive literary output as well as his biography. While Lucas’s profile is generally sympathetic, he doesn’t shy away from Reed’s many (many) battles (Lin-Manuel Miranda, Alice Walker, Ralph Ellison, the New York literary establishment, etc. etc. etc.).  The print edition of the article is titled “I Ain’t Been Mean Enough,” which comes from a line from Reed’s 1973 poem “The Author Reflects on His 35th Birthday”:

For half a century, he’s been American literature’s most fearless satirist, waging a cultural forever war against the media that spans a dozen novels, nine plays and essay collections, and hundreds of poems, one of which, written in anticipation of his thirty-fifth birthday, is a prayer to stay petty: “35? I ain’t been mean enough . . . Make me Tennessee mean . . . Miles Davis mean . . . Pawnbroker mean,” he writes. “Mean as the town Bessie sings about / ‘Where all the birds sing bass.’ ”

Lucas’s Reed is not a cantankerous caricature though. We get a nice survey of the man’s works situated against his ever-evolving politics and aesthetics. Nor does the profile dwell too long on Reed’s earlier novels (which I confess are my favorites—the most recent long work of Reed’s I’ve read was 2011’s Juice! I had absolutely no idea before reading the profile that Reed has a new novel out this summer, The Terrible Fours).

There’s a measure of defiance to his late-career productivity. Wary of being tethered to his great novels of the nineteen-seventies, Reed is spoiling for a comeback, and a younger generation receptive to his guerrilla media criticism may be along for the ride. “I’m getting called a curmudgeon or a fading anachronism, so I’m going back to my original literature,” Reed told me. “In the projects, we had access to a library, and I’d go get books by the Brothers Grimm.” Now, he says, “I’m reverting to my second childhood. I’m writing fairy tales.”