I promise I’ll return this one. 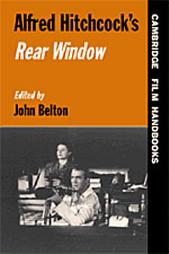 This book makes a great introduction to film writing, although I’m not sure it’s necessarily for film fans — more of a theory book, really. This book is from my uncle’s library; for years now, whenever I visit my aunt and uncle down in the Gulf Coast, I pick this book up and read from it. My uncle also has a fantastic book of essays on Lynch’s Blue Velvet. The essays in Alfred Hitchcock’s Rear Window (ed. John Belton), written largely in the deconstructionist, post-Derrida vein, did much to influence my own college tries at film writing. I realize now that I learned more about contemporary theory (Lacanian psycholinguistics, Mulvey’s “the gaze,” etc) through these essays than I ever did in a classroom lecture.

I didn’t mean to take this book; I’ll blame this one on the wife. Last time we stayed down in St. Pete Beach, I guess I had left the book out and she simply packed it up. We’re supposed to go down there this weekend; again, I promise to return it.