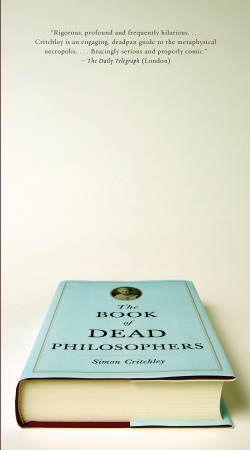 A cursory glance at Simon Critchley’s skinny new work, The Book of Dead Philosophers, might lead one to misjudge the book as an ephemeral, superfluous, and even downright jokey sort of “Philosophy for Dummies.” That would be a mistake. While The Book of Dead Philosophers does aim for a broad, popular appeal, Critchley’s wily cataloging of the deaths of nearly 200 philosophers is hardly insubstantial reading. Working from Cicero’s maxim that “To philosophize is to learn how to die,” Critchley sets out to contextualize these philosophers’ writings on death against the very deaths of those philosophers. Ranging from the sophists of ancient Greece to the Classical Buddhists of China to post-modern gadflies like Foucault and Derrida, Critchley’s writing evokes both humor and pathos, and works in some ways as an overview of the history of philosophy without ever becoming didactic or overreaching its central goal.

While Critchely’s main purpose in Dead Philosophers seems to be to entertain and perhaps enlighten, he doesn’t shy from injecting his own attitude about his subject. In his introduction he addresses philosophies that emphasize an afterlife, arguing “that they cultivate the belief that death is an illusion to be overcome with the right spiritual preparations. However, it is not an illusion, it is a reality that has to be accepted. I would go further and argue that it is in relation to the reality of death that one’s existence should be structured.” Later, Critchley condemns the metaphysical, Platonist tradition further, and, at the same time, provides a greater rationale for his book: “I hope to show the material quality of the many lives and deaths that we will review disrupts the move to something like “Spirit” and places a certain way of doing philosophy in question. To that extent, there is something intensely arrogant, even hubristic, about a philosopher’s disregard for the lives and deaths of other philosophers.” Critchley’s materialist philosophy leads to an occasionally snarky–and quite humorous–tone when writing about the likes of Anslem, Thomas Aquinas, or even Heidegger and Schopenhauer. His sympathies are more earnestly apparent when he addresses the death of someone whose outlook he shares. Critchley on Bertrand Russell: “Any conception of the immortality of the soul is therefore both iniquitous, because it is untrue, and destructive of the possibility of happiness, which requires that we accept our finitude.”

Arranged both chronologically and geographically into short sections ranging from a few sentences to a few pages, Dead Philosophers encourages jumpy, discontinuous, and episodic readings. Still, despite his caveat that he is presenting a “messy and plural ragbag of lives and deaths that cannot simply be ordered into a coherent conceptual schema,” Critchley nonetheless manages to create nuance, layer, and perhaps even a touch of narrative to this work. In one of the final entries of the book, a touching tribute to Jacques Derrida (at three pages, one of the longest in the book–twice as long as the section on Plato), Critchley writes, “the dead live on, they live on within us in a way that disturbs any self-satisfaction, but which troubles us and invites on us to reflect on them further. We might say that wherever a philosopher is read, he or she is not dead. If you want to communicate with the dead, then read a book.” Lovely.

The American publication of The Book of Dead Philosophers is available February 10th, 2009 from Vintage Books.

Many readers will may also be interested in Simon Critchley’s essay on Barack Obama and metaphysical philosophy, “The American Void,” published in last November’s issue of Harper’s Magazine, or the post-victory essay, “What’s Left After Obama?” published last November in Adbusters.

2 thoughts on “The Book of Dead Philosophers — Simon Critchley”