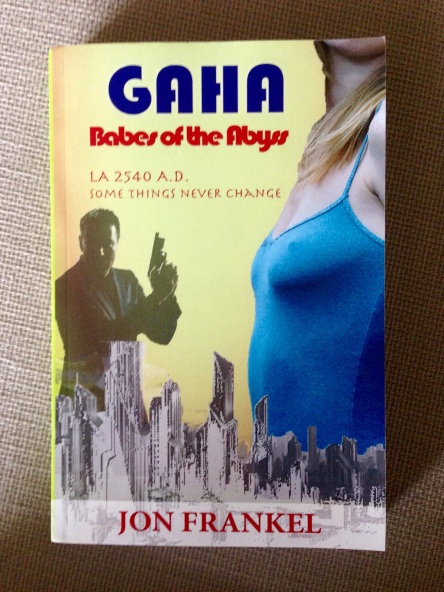 Jon Frankel’s Gaha: Babes of the Abyss is simultaneously familiar and estranging, a bizarre California crime-noir-dystopian shot through a druggy haze. It’s funny and weird, part caper, part adventure story, where everything’s just a little off (and more than a little sleazy). The easy comparison to Philip K. Dick is not unwarranted: Frankel’s satire is a dark mind-bender and a propulsive page-turner. Civil War, a genetically-altered ruling class, sex, violence, drugs, and real estate. The title is new from new indie imprint Whiskey Tit (Ms. Miette’s the honcho there, so you know it’s good stuff). Their blurb:

She was seventeen and all leg, banging the hell out of a pinball machine. I watched her play, my back to the bar. There was a cigarette going in her left hand with a cone of ash hanging off the end. The muscles in her bare thighs tensed up every time she bumped her pelvis into the coin box. As the ball shot toward her flippers she turned her feet in and banged with the right and then the left hand, knocking the ash to the floor. The red light on top of the machine started to turn and a police siren went off. It barked, “Pull off to the side of the road!” and she slapped the flipper, sending the ball up into a thousand-point hole. While the lights flashed and sirens sang she took a long drag off the cigarette.

I should have known better.

So begins Jon Frankel’s unflinching saga of Bob Martin, real estate pimp of Los Angeles in the year 2540, and his hapless, hopeless efforts to stay out of trouble in the company of 17-year-old Irmela von Dorderer and her big sister Elma.  He should have known better, indeed.

3 thoughts on “Gaha: Babes of the Abyss (Book acquired and read sometime in May 2015)”