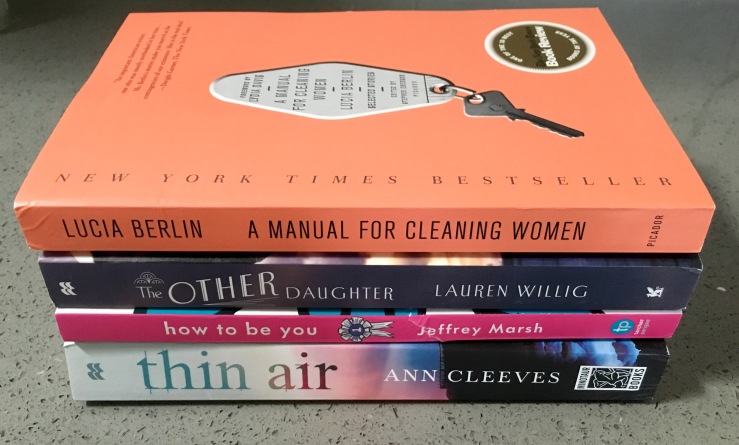 Four review copies in yesterday’s mail (solicited and unsolicited). I get behind on these books acquired posts, so I’ll lump the books in all at once and quickly.

First and foremost: Lucia Berlin’s collection A Manual for Cleaning Women is new in trade paperback from Picador. The book got a ton of buzz last year when it came out in hardback last year, and I didn’t read it then, but I did read the Black Sparrow-published collection Homesick. Many of the stories in Manual were first published in Homesick. They are very good stories—funny and gritty and elegant and sad and real. Full review forthcoming; in the meantime here’s Lydia Davis, who wrote the intro to Manual:

I have always had faith that the best writers will rise to the top, like cream, sooner or later, and will become exactly as well-known as they should be-their work talked about, quoted, taught, performed, filmed, set to music, anthologized. Perhaps, with the present collection, Lucia Berlin will begin to gain the attention she deserves.

The Other Daughter by Lauren Willig is an historical romance novel from St. Martin’s Griffin imprint. Their blurb:

Raised in a poor yet genteel household, Rachel Woodley is working in France as a governess when she receives news that her mother has died, suddenly. Grief-stricken, she returns to the small town in England where she was raised to clear out the cottage…and finds a cutting from a London society magazine, with a photograph of her supposedly deceased father dated all of three month before. He’s an earl, respected and influential, and he is standing with another daughter — his legitimate daughter. Which makes Rachel…not legitimate. Everything she thought she knew about herself and her past — even her very name — is a lie.

Still reeling from the death of her mother, and furious at this betrayal, Rachel sets herself up in London under a new identity. There she insinuates herself into the party-going crowd of Bright Young Things, with a steely determination to unveil her father’s perfidy and bring his — and her half-sister’s — charmed world crashing down. Very soon, however, Rachel faces two unexpected snags: she finds that she genuinely likes her half-sister, Olivia, whose situation isn’t as simple it appears; and that she might just be falling for her sister’s fiancé…

How to Be You by Jeffrey Marsh is a self-help book. It includes coloring pages. Publisher Penguin’s blurb:

This book is about how to finally give up on feeling bad about yourself and discover the best person you can be.

An interactive experience, How to Be You invites you to make the book your own through activities such as coloring in charts, answering questions about how you do the things you do, and discovering patterns in your lives that may be holding you back. Through Jeffrey’s own story of “growing up fabulous in a small farming town”–along with the stories of hero/ines who have transcended the stereotypes of race, age, and gender–you will discover that you are not alone, can deepen your relationship with yourself, and find the courage to take a leap that will change your life.

A group of old university friends leave the bright lights of London and travel to Shetland to celebrate the marriage of one of their friends. But, one of them, Eleanor, disappears—apparently into thin air. It’s mid-summer, a time of light nights and unexpected mists. And then Eleanor’s body is discovered lying in a small loch close to the cliff edge.

Detectives Jimmy Perez and Willow Reeves are dispatched to investigate. Before she went missing, Eleanor claimed to have seen the ghost of a local child who drowned in the 1920s. Her interest in the ghost had seemed unhealthy—obsessive, even—to her friends: an indication of a troubled mind. But Jimmy and Willow are convinced that there is more to Eleanor’s death than they first thought.

Is there a secret that lies behind the myth? One so shocking that someone would kill—many years later—to protect?