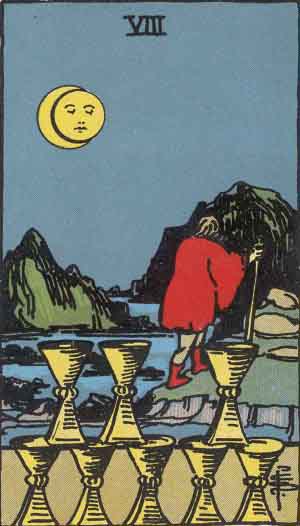 “The Significance of the Number 8 in Blood Meridian“ is a compelling analysis by William Wickey. Wickey lists numerous examples of the number in McCarthy’s (anti)Western, and touches on the number as a motif connected to gnosticism, tarot, and more.

From the beginning of Wickey’s essay:

The first “major” example of eight occurs in Chapter V when Sproule and the kid stumble across a tree hung with dead babies in a mountain pass after the destruction of Captain White’s war party at the hands of The Comanches.

“The way narrowed through the rocks and by and by they came to a bush that was hung with dead babies. / They stopped side by side reeling in the heat. These small victims, seven, eight of them had holes punched in their under jaws and were hung so by their throats from the broken stobs of mesquite to stare eyeless at the naked sky.” (57)

This grizzly scene sets the tone for subsequent uses of eight in the novel. Every major appearance of eight implies death.

A very similar description follows in the same chapter, describing a group of delirious Mexican soldiers that save Sproule and the kid’s lives by giving them water.

“The refugees stood by the side of the road. The riders looked burnt and haggard coming up out of the sun and they sat their horses as if they had no weight at all. There were seven, eight of them. They wore broadbrimmed hats and leather vests and they carried escopetas across the pommels of the saddles and as they rode past the leader nodded gravely to them from the captain’s horse and touched his hatbrim and they rode on. (63)