I have been listening to Arkady and Boris Strugatsky’s 1972 novel The Snail on the Slope on audiobook over the last two weeks.

This new English translation is by Olena Bormashenko, who also translated Roadside Picnic and Hard to Be a God. (I listened to Roadside Picnic last year—this fantastic audiobook is read by Robert Forster—and read Bormashenko’s translation of Hard to Be a God after watching Aleksei German’s 2013 film adaptation. All are excellent). Chris Andrew Ciulla narrates the new audiobook of The Snail on the Slope and he does a very good job.

Like I said, I’ve been listening to this new translation of The Snail on the Slope for a few weeks. I should be done (the book is only 9.5 hours), but I’ve listened to most of the chapters twice, and restarted the book once, because The Snail on the Slope is fucking bonkers. The novel is a wild trip, full of bizarre transformations, failed plans, jungle swamps,  marching ants, deadlings, mushrooms, foolish bureaucrats, and broken calculators—it’s abject, savage, funny, and just so fucking weird, a bizarre beast tumbling around on its own radical logic. I have about 3 hours left, but I don’t think I’ll muster a review—or a summary, I mean. Or anyway—

I mean, here’s my review: I love it. I love its strange mucky weirdness, its refusal to clearly delineate the contact points of its allegorical satire, its sheer absurdity, its utter alterity. But a summary seems too much to ask so—

The Snail on the Slope is a neglected masterpiece by Russian science fiction greats Arkady and Boris Strugatsky, who thought of it as their “most complete and important work.” now, in a stunning translation, this tour de force is ready to be introduced to a new generation of American readers. The novel takes place in two worlds. One is the Administration, an institution run by a surreal, Kafkaesque bureaucracy whose aim is to govern the forest below. The other is the Forest, a place of fear, weird creatures, primitive but garrulous people, and violence. Peretz, who works at the Administration, wants to visit the Forest. Candide crashed in the Forest years ago and wants to return to the Administration. Their journeys are surprising and bizarre, and readers are left to puzzle out the mysteries of these foreign environments. Brilliant, enigmatic, and revelatory, The Snail on the Slope is one of the greatest literary works to come out of Soviet Russia.

Here is the cover + blurb of Bantam’s 1980 edition of The Snail on the Slope (translated by Alan Meyers). Bob Larkin’s cover is more interesting to me than the “respectable” cover that Chicago Review Press put together so—

This edition was apparently recalled, distribution was halted, and existing copies were destroyed. 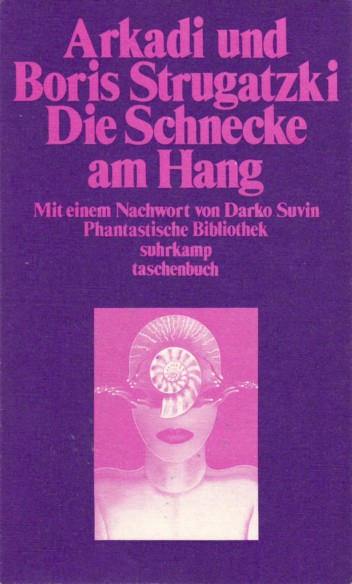 But I promised in this blog’s headline to riff on the first paragraph, which isn’t that long, but in some ways reveals the sheer oddity of The Snail on the Slope. So here is that paragraph:

From this height, the forest looked like dappled, fluffy foam; like a gigantic, world-encompassing porous sponge; like an animal that had once lain hidden in wait, then had dozed off, becoming overgrown with coarse moss. Like a shapeless mass, hiding a face no one had ever seen.

The viewer at this height is one of the novel’s two heroes, Peretz, who dangles his feet over the forest that calls to him. I could go on about Peretz’s attraction to the unknowable forest, but let’s look instead at the similes the Strugatskys (and their translator Bormashenko) deploy here:

The utter alterity of the forest is announced at the novel’s outset. This shifting series of similes shows that the central space of The Snail on the Slope cannot have a fixed definition—it cannot even have a stable referent of similitude. Rather, the forest is ever-shifting, from the playful guise of a space of “fluffy foam” to the sinister aspect of a “shapeless mass” that hides an unknown (and unknowable) visage. The Strugatskys shuttle us from simile to simile, foregrounding one of the novel’s central themes—language has a limited purchase of reality. Peretz, a surrogate for the reader, cannot settle on a simile, which only entices him more: What is this place? What would it mean to know this place—in language? Significantly, Peretz is a linguist, but he—and the reader–have no training to properly comprehend what enfolds when The Snail on the Slope takes us into the forest. And this is the fucked up joy of the novel—one weird transformation morphs into another, similes unwinding in a stretch toward an ultimate referent that refuses to arrive on time.