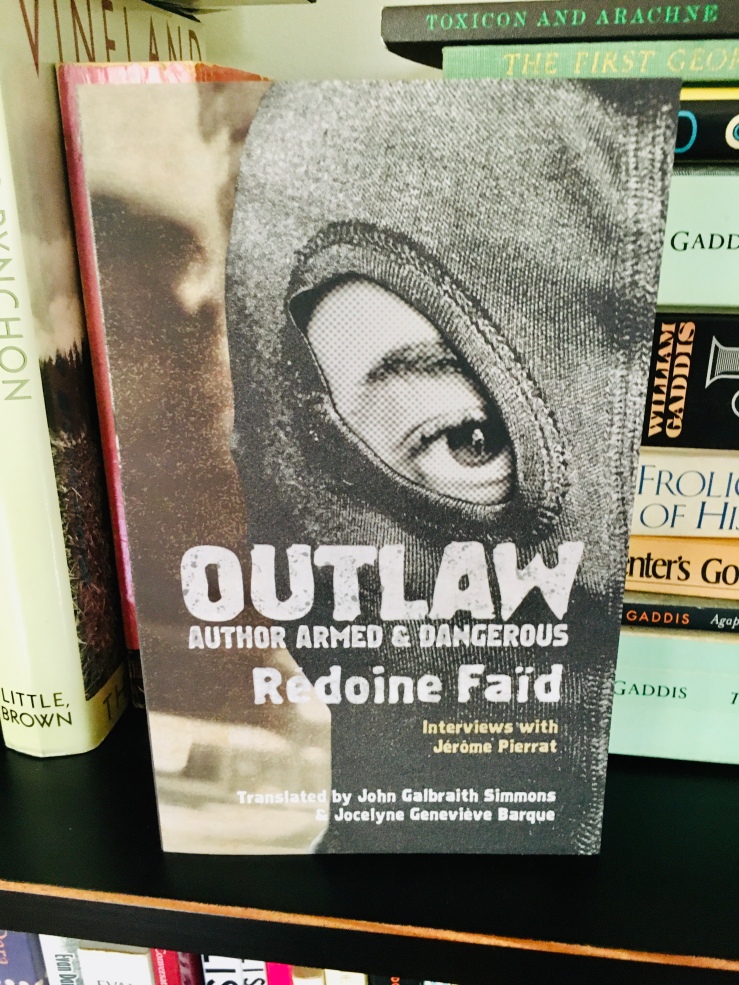 I finally made some time this afternoon to dip into Rédoine Faïd’s memoir-in-interviews, Outlaw: Armed and Dangerous. It’s a propulsive, fast read so far–I put away the first 60 pages in one reading. Faïd, fresh out of prison, tells his life story to journalist Jérôme Pierrat. The book is newly-translated by John Galbraith Simmons and J.G. Barque, and available from Contra Mundum Press. Their blurb:

Memoirs of celebrated criminals purvey vivid personal stories while spawning sharp questions about the cultures that produced them. In Outlaw: Author Armed & Dangerous, Rédoine Faïd, of Algerian immigrant parents, born and raised in the housing projects surrounding Paris, recounts his career as an infamous and renowned bandit. Drawing inspiration and instruction from a host of films and television series, Faïd styled himself and was known to friends and accomplices as “Doc” — after Steve McQueen in the legendary suspense thriller, The Getaway.

With self-discipline and a striking ability to learn from experience, Faïd carried off his first robberies while still a teenager. He soon graduated from petty thievery to armed robbery, targeting computer component suppliers, jewelry stores, banks, and most memorably, armored trucks. A master of disguise, with bulletproof vest and a .357 Magnum as a prop to encourage compliance, he led a crew that operated with careful planning but eschewed bloodshed and physical violence.

In imitation of Michael Mann’s Heat, Faïd and his cohorts donned hockey masks for one job, sometimes even quoting from other famous heist films during their capers. When bold plans went wrong, he reacted with fast thinking that served him well — until it didn’t, and he was arrested and imprisoned in 1998.

Outlaw was first published in France in 2009, after which Faïd was imprisoned again. Subsequently, his dramatic escapes from jail, in 2013 and 2018, made front-page news in France and around the world.

Interviewed by journalist Jérôme Pierrat, who specializes in crime and investigative reportage, Rédoine Faïd tells his own story with panache and humor, darkened by introspection and cautionary tales. His story, like that of a character out of a Jean-Pierre Melville film or Dassin’s Rififi, is not only intriguing, it is also as compelling as any high-grade thriller. Three months after his daring helicopter escape from Réau Prison in 2018, Faïd was captured again. He currently remains in jail.