It seems so dreadful to stay a bachelor, to become an old man struggling to keep one’s dignity while begging for an invitation whenever one wants to spend an evening in company, to lie ill gazing for weeks into an empty room from the corner where one’s bed is, always having to say good night at the front door, never to run up a stairway beside one’s wife, to have only side doors in one’s room leading into other people’s living rooms, having to carry one’s supper home in one’s hand, having to admire other people’s children and not even being allowed to go on saying: ‘I have none myself,’ modeling oneself in appearance and behavior on one or two bachelors remembered from one’s youth.

That’s how it will be, except that in reality, both today and later, one will stand there with a palpable body and a real head, a real forehead, that is, for smiting on with one’s hand. 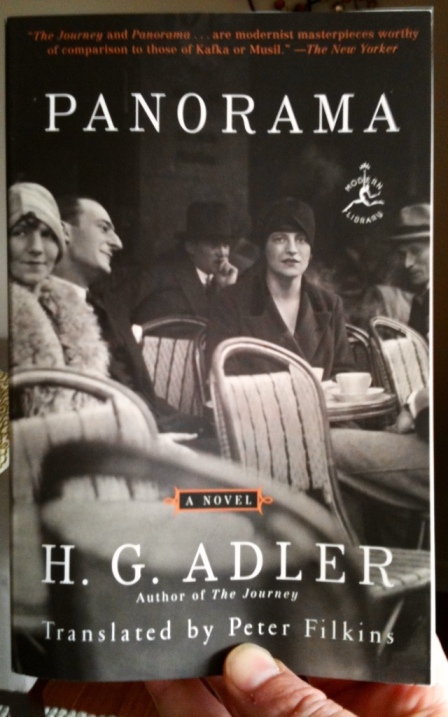 Like Kafka, H.G. Adler was a German-speaking Jewish writer from Prague. About a year ago, Adler’s Panorama was released for the first time in in English (by Peter Filkins); The book is now available in trade paperback (Random House). Adler survived the Holocaust, forced first into Theresienstadt and then Auschwitz, where his wife and mother were murdered in the gas chambers. Panorama is an autobiographical bildungsroman, with its hero, young Josef Kramer, standing in for Adler. While the book clearly works its way into grim territory, the beginning is bucolic and sweet and strange, an account of young Josef at home with his family. There’s a cinematic scope to Adler’s prose – Panorama is a Modernist work, one where the narrative freely dips into its protagonist’s mind. By the bye, W.G. Sebald references Adler in Austerlitz, a book that tries to measure the continental memory of the Holocaust.