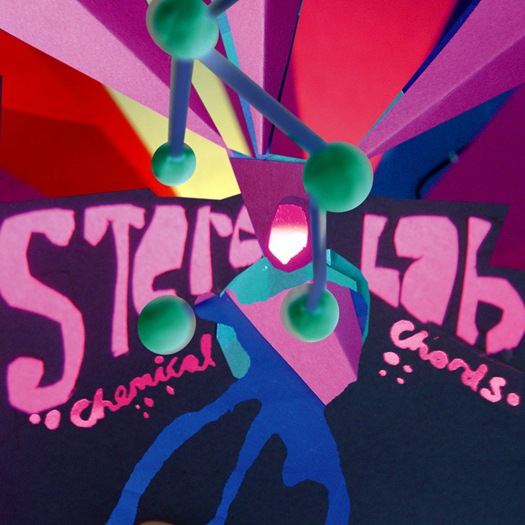 When “Valley Hi!” pops up roughly half way through Chemical Chords, Stereolab’s ninth studio album, the realization sinks in that on just about any new group’s new album the song would be a great achievement, a perfectly constructed pop song, fun, bouncy, a little sly even, with sexy lead vocals, effervescent harmonies, and tight but lush instrumentation. However, wedged into Stereolab’s nearly two-decade-long oeuvre, the song barely stands out, and that’s the problem. The band consistently delivers material like this, to the point that it all kinda sounds the same–a charge that’s been leveled at them by critics and fans alike for a few years now, starting more or less with 1999’s Cobra and Phases Group Play Voltage in the Milky Night, a record that some (maybe many) thought failed to live up to the radical revisionist pop tendencies of 1996’s Emperor Tomato Ketchup (it’s hard to top a perfect album, folks!) or the digital experiments of 1997’s Dots and Loops (my least favorite Stereolab album; sounds like marbles rolling on ice). I happen to like Cobra a lot: it’s warm (and literally fuzzy) and masterfully played–and kinda anonymous, a trend that Stereolab continues with Chemical Chords.

From the outset of the new album, Stereolab establishes a metronomic motortik pop vibe from which they rarely deviate. Opener “Neon Beanbag” flows into first single “Three Women” without much to differentiate the two besides a two second gap and a key change, and the third track, “One Finger Symphony,” only stands out due to its throwaway brevity. It isn’t until Sean O’Hagan’s slinky strings announce the title track that the album grabs onto something new. “Chemical Chords” approaches a ’70s blaxploitation vibe–think Curtis Mayfield or Bobby Womack here–but ends up being (you guessed it) just another Stereolab song, beautifully polished and meticulously executed with little or no risk to band or audience. The next track, “The Ecstatic Static” slides right into the same groove, and it becomes apparent that Stereolab have released yet another perfect ambient soundtrack for any polite social gathering. The rest of the album follows this mode of flawless and ultimately forgettable songwriting.

There are moments of exception, of course, but only moments. The countryfied swagger that initiates the penultimate track, “Daisy Click Clack,” is pretty great, if only for simply hitting a different rhythm and sound, and the song’s lyrics are about making music, which is always cool. It’s on “Pop Molecule (Molecular Pop 1),” where Stereolab employ backmasked drones and triumphant chugging guitars that recall the glory days of tracks like “Crest,” from ’93’s Transient Random-Noise Bursts with Announcements (or anything off of ’92’s dreampop singles collection, Switched On), that the band finally gets its hands a little dirty–with great results. Too bad they only play it out for about two minutes; the old groop would’ve droned those two chords for at least six–the listener doesn’t ever get a chance to get hypnotized.

It seems like I’m bashing the album, but I’m not. I love Stereolab. Really. And Chemical Chords is pretty good — it will hang out in my stereo for a month, maybe two, and then I’ll forget about it. Ultimately, it’s too polished, too precise, and too meticulous to make any long-term impact. We know Stereolab are fantastic arrangers and musicians, and their taste is impeccable, but when bands fail to take risks, the music gets stale.

Chemical Chords is available from 4AD Records in the US on August 19th.