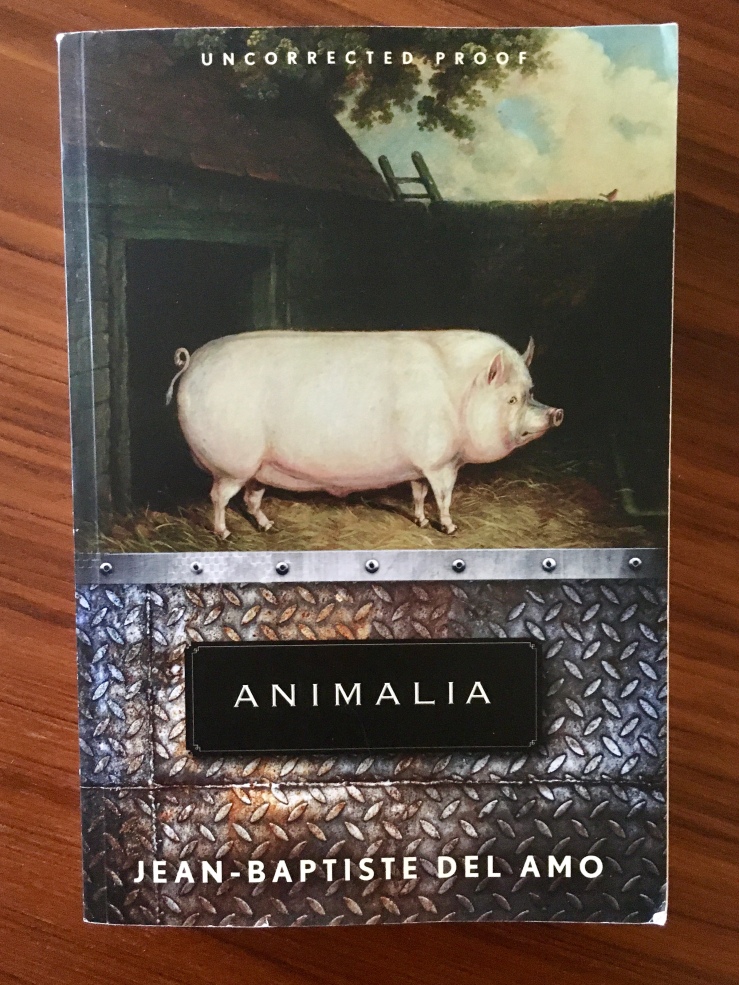 A number of people whose literary taste I admire and have learned from (including this guy) have told me to read Jean-Baptiste Del Amo’s novel Animalia. (English translation is by Frank Wynne, by the way.)

I avoided any reviews or descriptions (although a bit of chatter and stray lines have led me to believe the book has an abject grimy grittiness to it—and the back of this copy compares it to Cormac McCarthy), but trips to my beloved bookstore never yielded a copy over the past six months or so. I was looking for the Fitzcarraldo Editions edition, which was probably a mistake. Those are hard to come by in the States.

A few weeks—days? —I don’t know man, time has been weird, we all know that right? Like this virus, a post-postmodern moment, has shifted again our human relationship with time/space, revealing that the modernist schedules and movements and timelines and tics that we’d been following, perhaps even believing in, were fictions—which of course, those of us birthed in the postmodern era understood, either fully or at least intuitively—but we had to subscribe to those fictions to like, survive—but now, now, hey, now what is our relationship to time and space?—does anyone else wake up at 3am and then go back to sleep at 7am?—has anyone else ordered a book off the internet, possibly drunk, or possibly in a weird mix of sleep aids and melatonin, or possibly just a bit crazed?—these aren’t real questions—

At some point in the recent past, Fitzcarraldo Editions tweeted about an ebook sale that reminded me to get Animalia. (A basic twitter search reveals that my previous paragraph is as idiotic as you no doubt took it to be, if you bothered to even read it. This happened on 30 March 2020.) Of course, I could not get the ebook in the States.

I’m not sure when exactly I ordered a copy of Animalia from an indie bookseller online. When it showed up the other day I was a bit surprised: first that I’d ordered it, second that it was an uncorrected proof. But I was happy that some idiot version of myself from the past sent me this gift, the first physical book I’ve gotten in what seems like a long time.

From an excerpt of the novel at Granta:

The genetrix, a lean, cold woman, with a ruddy neck and hands that are ever busy, affords the child scant attention. She is content merely to instruct her, to pass on the skills for those chores that are the preserve of their sex, and the child quickly learns to emulate her in her tasks, to mimic her gestures and her bearing. At five years old, she holds herself stiff and staid as a farmer’s wife, feet planted firmly on the ground, clenched fists resting on her narrow hips. She beats the laundry, churns the butter and draws water from the well or the spring without expecting affection or gratitude in return. Before Éléonore was born, the father twice impregnated the genetrix, but her menses are light, irregular, and continued to flow during the months when, in hindsight, she realizes that she was pregnant, though her belly had barely begun to swell. Although scrawny, she had a pot-belly as a child, her organs strained and bloated from parasitic infections contracted through playing in dirt and dungheaps, or eating infected meat, a condition her mother vainly attempted to treat with decoctions of garlic.

One October morning, alone in the sty, tending to the sow about to farrow, the genetrix is felled by a pain and, without even a cry, falls to her knees on the freshly scattered straw whose pale, perfumed dust is still rising in whorls. Her breaking waters drench her undergarments and her thighs. The sow, also in the throes of labour, trots in circles, making high whining sounds, her huge belly jiggling, her teats already swollen with milk, her swollen vulva dilated; and it is here, on her knees, and later on her side, that the genetrix gives birth, like a bitch, like a sow, panting, red-faced, her forehead bathed with sweat. Slipping a hand between her thighs, she feel the viscid mass tearing her apart. She buries her fingers in the fontanelle, rips out the stillborn foetus and flings it far from her. She grips the bluish umbilical cord attached to it and from her belly pulls the placenta which falls to the ground with a spongy sound. She stares at the tiny body covered in vernix caseosa, it looks like a yellowish worm, like the grey and golden larva of a potato beetle ripped from the rich soil and the roots on which it feeds. Daylight filters between loose boards, streaking the sour, dusty air, the bleak half-light that reeks of a knacker’s yard, and falls on the lifeless form lying on the straw. The genetrix gets to her feet, split in two, one hand under her skirt touching the swollen lips of her sex. She steps back, horrified, and leaves the sty, careful to latch the door, leaving to the sow the afterbirth and its fruit. For a long time she leans against the wall of the sty, motionless, gasping for breath. Bright blurred shapes float in her field of vision. Then she leaves the farm and takes the road towards Puy-Larroque, limping through a heavy drizzle that washes her face and the skirt stained brown with lochia. Without a glance at anyone, she crosses the village square. Those who see her notice the soiled skirt she is gripping in one fist, the pallid face, the lips pressed so tightly that the mouth is white as an old scar. Her brown hair has escaped her scarf and is plastered to her face and neck. She pushes open the church door and falls to her knees before the crucifix.