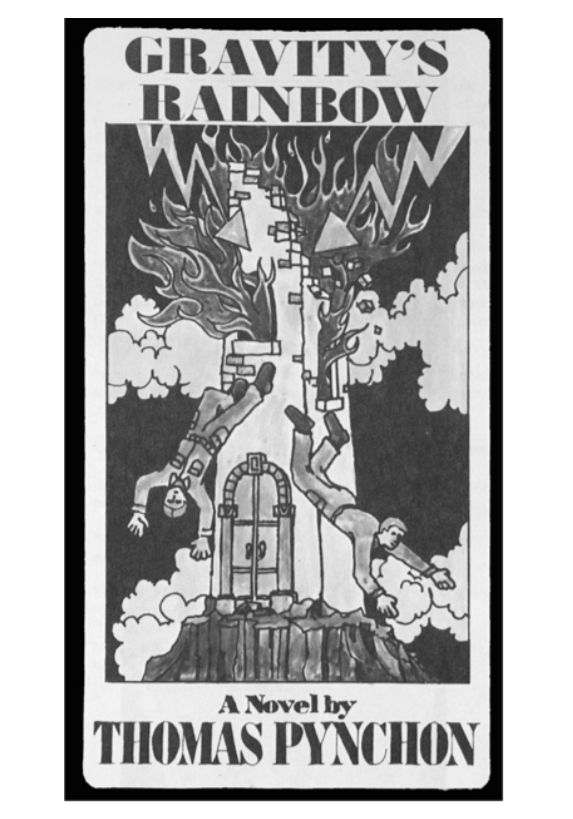 Herman and Weisenburger note the existence of an even earlier version with Pynchon’s working title Mindless Pleasures. I found it quickly at Pynchon Wiki, which notes:

how the image is based on the Tarot card The Tower, which – as we learn in Weissmann’s Tarot (p. 746-47) – represents “any System which cannot tolerate heresy: a system which, by its nature, must sooner or later fall. We know by now that it is also the Rocket.” 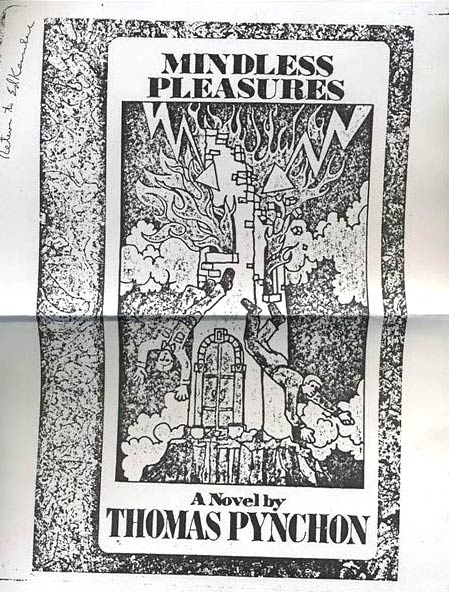 Here are Herman and Weisenburger on that first title, Mindless Pleasures:

…Pynchon’s, or perhaps the Viking editors’, extraction of that phrase [“mindless pleasures”] for the book title, although scotched, surely indexed some shared sense of thematic relevance. An early trial cover put the title “Mindless Pleasures” over a cleverly stylized version of the Tower, a key card in Weissmann/Blicero’s tarot reading. A second trial cover, also scotched, put “Gravity’s Rainbow” over the same image. The Tower gathers several interpretations, most notably (says our narrator) that of “a Gnostic or Cathar symbol for the Church of Rome, and this is generalized to mean any system which cannot tolerate heresy: a system which, by its nature, must sooner or later fall. We know by now that it is also the Rocket.” The notion of tolerance and intolerance is catchy and may also link to Marcuse on repression…. One reading of this cover would be that mindless pleasures bring down the system, are anathema to it. The common gloss of “mindless” is that it refers to the contrary of normativity, or not a mentality conditioned or “defined within rigid societal parameters”…. This contrariness presumes a hierarchy, an established order elevated above a variety of upstart alternatives, many of them popular, carnivalesque, of the body. And the arts are among them…

Herman and Weisenburger cite Clifford Mead’s Thomas Pynchon: A Bibliography of Primary and Secondary Materials (Dalkey, 1989) as their source for the trial cover.

As far as I can find, no cover designer is credited.