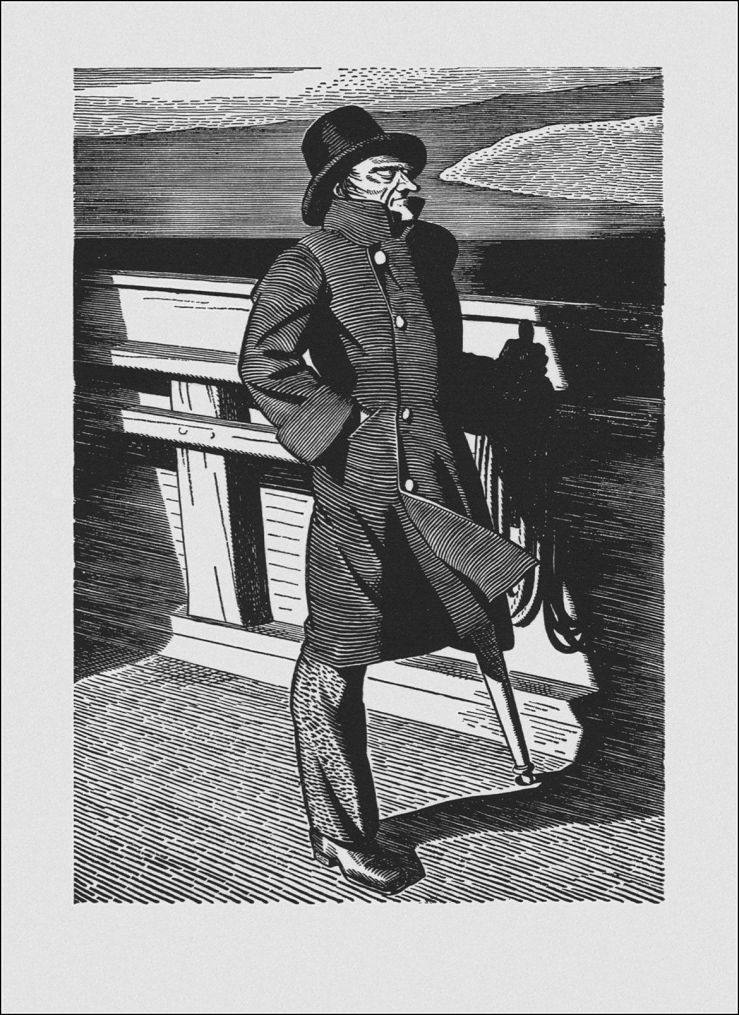 What is it, what nameless, inscrutable, unearthly thing is it; what cozening, hidden lord and master, and cruel, remorseless emperor commands me; that against all natural lovings and longings, I so keep pushing, and crowding, and jamming myself on all the time; recklessly making me ready to do what in my own proper, natural heart, I durst not so much as dare? Is Ahab, Ahab? Is it I, God, or who, that lifts this arm? But if the great sun move not of himself; but is as an errand-boy in heaven; nor one single star can revolve, but by some invisible power; how then can this one small heart beat; this one small brain think thoughts; unless God does that beating, does that thinking, does that living, and not I. By heaven, man, we are turned round and round in this world, like yonder windlass, and Fate is the handspike.

“Look ye, blacksmith, these are the gathered nail-stubbs of the steel shoes of racing horses.”

“Horse-shoe stubbs, sir? Why, Captain Ahab, thou hast here, then, the best and stubbornest stuff we blacksmiths ever work.”

“I know it, old man; these stubbs will weld together like glue from the melted bones of murderers. Quick! forge me the harpoon. And forge me first, twelve rods for its shank; then wind, and twist, and hammer these twelve together like the yarns and strands of a tow-line. Quick! I’ll blow the fire.”

When at last the twelve rods were made, Ahab tried them, one by one, by spiralling them, with his own hand, round a long, heavy iron bolt. “A flaw!” rejecting the last one. “Work that over again, Perth.”

This done, Perth was about to begin welding the twelve into one, when Ahab stayed his hand, and said he would weld his own iron. As, then, with regular, gasping hems, he hammered on the anvil, Perth passing to him the glowing rods, one after the other, and the hard pressed forge shooting up its intense straight flame, the Parsee passed silently, and bowing over his head towards the fire, seemed invoking some curse or some blessing on the toil. But, as Ahab looked up, he slid aside.

“What’s that bunch of lucifers dodging about there for?” muttered Stubb, looking on from the forecastle. “That Parsee smells fire like a fusee; and smells of it himself, like a hot musket’s powder-pan.”

At last the shank, in one complete rod, received its final heat; and as Perth, to temper it, plunged it all hissing into the cask of water near by, the scalding steam shot up into Ahab’s bent face.

“Would’st thou brand me, Perth?” wincing for a moment with the pain; “have I been but forging my own branding-iron, then?”

“Pray God, not that; yet I fear something, Captain Ahab. Is not this harpoon for the White Whale?”

“For the white fiend! But now for the barbs; thou must make them thyself, man. Here are my razors—the best of steel; here, and make the barbs sharp as the needle-sleet of the Icy Sea.”

For a moment, the old blacksmith eyed the razors as though he would fain not use them.

“Take them, man, I have no need for them; for I now neither shave, sup, nor pray till—but here—to work!”

Fashioned at last into an arrowy shape, and welded by Perth to the shank, the steel soon pointed the end of the iron; and as the blacksmith was about giving the barbs their final heat, prior to tempering them, he cried to Ahab to place the water-cask near.

“No, no—no water for that; I want it of the true death-temper. Ahoy, there! Tashtego, Queequeg, Daggoo! What say ye, pagans! Will ye give me as much blood as will cover this barb?” holding it high up. A cluster of dark nods replied, Yes. Three punctures were made in the heathen flesh, and the White Whale’s barbs were then tempered.

Now, mustering the spare poles from below, and selecting one of hickory, with the bark still investing it, Ahab fitted the end to the socket of the iron. A coil of new tow-line was then unwound, and some fathoms of it taken to the windlass, and stretched to a great tension. Pressing his foot upon it, till the rope hummed like a harp-string, then eagerly bending over it, and seeing no strandings, Ahab exclaimed, “Good! and now for the seizings.”

At one extremity the rope was unstranded, and the separate spread yarns were all braided and woven round the socket of the harpoon; the pole was then driven hard up into the socket; from the lower end the rope was traced half-way along the pole’s length, and firmly secured so, with intertwistings of twine. This done, pole, iron, and rope—like the Three Fates—remained inseparable, and Ahab moodily stalked away with the weapon; the sound of his ivory leg, and the sound of the hickory pole, both hollowly ringing along every plank. But ere he entered his cabin, light, unnatural, half-bantering, yet most piteous sound was heard. Oh, Pip! thy wretched laugh, thy idle but unresting eye; all thy strange mummeries not unmeaningly blended with the black tragedy of the melancholy ship, and mocked it!

From “The Forge,” Chapter 113 of Melville’s Moby-Dick.