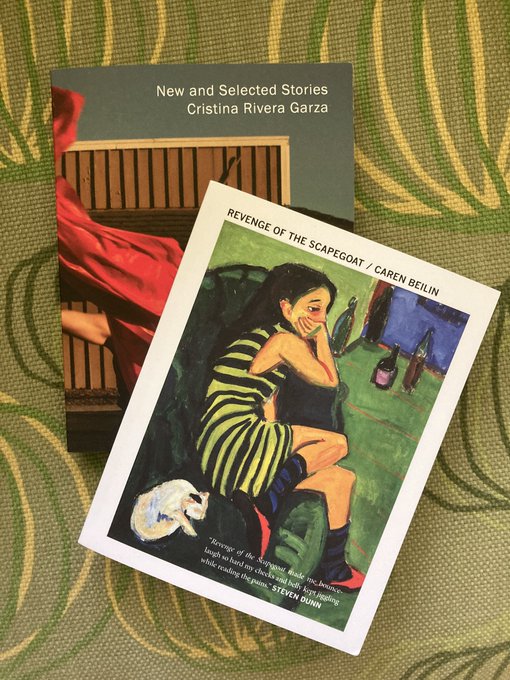 The Beilin seems like a picaresque surrealist joint, which is right up my alley. Press copy:

One day Iris, an adjunct at a city arts college, receives a terrible package: recently unearthed letters that her father wrote to her in her teens, in which he blames her for their family’s crises. Driven by the raw fact of receiving these devastating letters not once but twice in a lifetime, and in a panic of chronic pain brought on by rheumatoid arthritis, Iris escapes to the countryside—or some absurdist version of it. Nazi cows, Picassos used as tampons, and a pair of arthritic feet that speak in the voices of Flaubert’s Bouvard and Pécuchet are standard fare in this beguiling novel of odd characters, surprising circumstances, and intuitive leaps, all brought together in profoundly serious ways.

I spent a half hour reading a few of the stories in the Rivera Garza collection, going from an older track to a few that haven’t yet been published in Spanish yet. The later stories seem more daring in form and content–exciting stuff.

New and Selected Stories brings together in English translation stories from across Rivera Garza’s career, drawing from three collections spanning over 30 years and including new writing not yet published in Spanish. It is a unique and remarkable body of work, and a window into the ever-evolving stylistic and thematic development of one of the boldest, most original, and affecting writers in the world today.

The collection seems like a great introduction to Rivera Garza’s three decades of work. The translations are by Sara Brooker, Lisa Dillman, Francisca González Arias, Alex Ross, and Rivera Garza herself.