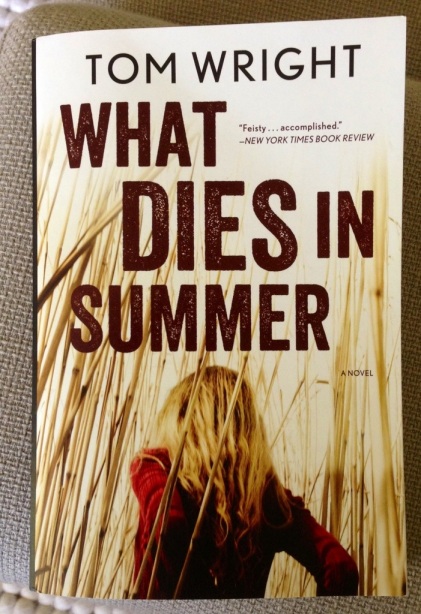 Tom Wright’s What Dies in Summer is new in trade paperback. Pub’s blurb:

“I did what I did, and that’s on me.” From that tantalizing first sentence, Tom Wright sweeps us up in a tale of lost innocence. Jim has a touch of the Sight. It’s nothing too spooky and generally useless, at least until the summer his cousin L.A. moves in with him and their grandmother. When Jim and L.A. discover the body of a girl, brutally raped and murdered in a field, an investigation begins that will put both their lives in danger. In the spirit of The Lovely Bones and The Little Friend, What Dies in Summer is a novel that casts its spell on the very first page and leaves an indelible mark.

And the lede from Julie Myerson’s review last year in the NYT:

Why do teenagers make such ideal protagonists? Maybe it’s because they’re doing just what novels do: struggling to make sense of a troubling and imperfect world. And at first, Jim, called Biscuit, and L. A. (Lee Ann), the teenage cousins at the heart of Tom Wright’s feisty first novel, are ­exactly what you hope they’ll be: funny, frank, mouthy and more than a touch off kilter. Both are forced to live with their grandmother because their mothers aren’t up to the task of child rearing. Their homes are haunted by alcoholism and violence, but Gram takes a simple, affectionate, responsibility for them — though it’s almost inevitable that certain questions, if not the answers, will push their ugly way to the surface sooner or later.