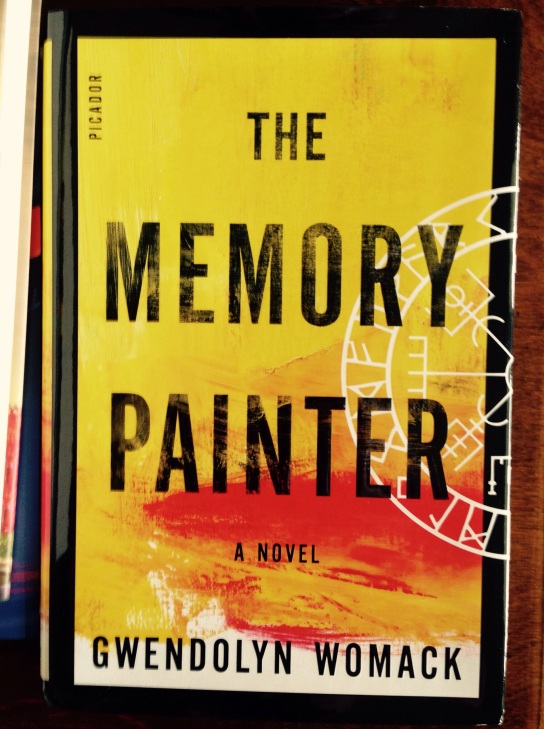 Gwendolyn Womack’s novel The Memory Painter is new in hardback from Picador. Their blurb:

Bryan Pierce is an internationally famous artist whose paintings have dazzled the world. But there’s a secret to his success: Every canvas is inspired by an unusually vivid dream. When Bryan awakes, he possesses extraordinary new skills…like the ability to speak obscure languages and an inexplicable genius for chess. All his life, he has wondered if his dreams are recollections, if he is re-experiencing other people’s lives. Linz Jacobs is a brilliant neurogeneticist, absorbed in decoding the genes that help the brain make memories, until she is confronted with an exact rendering of a recurring nightmare at one of Bryan’s shows. She tracks down the elusive artist, and their meeting triggers Bryan’s most powerful dream yet: visions of a team of scientists who, on the verge of discovering a cure for Alzheimer’s, died in a lab explosion decades ago.As Bryan becomes obsessed with the mysterious circumstances surrounding the scientists’ deaths, his dreams begin to reveal what happened at the lab, as well as a deeper mystery that may lead all the way to ancient Egypt. Together, Bryan and Linz start to discern a pattern. But a deadly enemy watches their every move, and he will stop at nothing to ensure that the past stays buried.A taut thriller and a timeless love story spanning six continents and 10,000 years of history, The Memory Painterby Gwendolyn Womack is a riveting debut novel unlike any you’ve ever read.

Vengeance” once again leads Quirke into his favorite kind of trouble: “yet another morass of human cupidity and deceit,” involving the deaths of powerful men and the foxy insolence of their glamorous widows. It breaks no new ground.

But why should Benjamin Black tamper with a winning formula? The crimes aren’t graphic or even terribly central. And the detecting questions don’t count for much. The books are far more notable for malaise, atmospherics, sexual chemistry and vast amounts of swirling tobacco smoke and mind-muddling alcohol, without which justice could apparently never prevail.

Vengeance is new in trade paperback from Picador.

Okay. There aren’t really bloodstains on Catriona McPherson’s mystery Dandy Gilver and the Proper Treatment of Bloodstains—but I’m a sucker for alliteration (and you clicked on the link, didn’t you?).  From The Independent’s review:

. . . Catriona McPherson’s novel . . . appears to be firmly in the cosy camp – but is it? The Dandy Gilver series demonstrates the author’s faultless assimilation of this idiom. A genteel note is sounded throughout, with the middle-class Dandy, an amateur female sleuth in the 1920s, solving knotty mysteries. But there’s a subtle detonation of the cosy genre, as the books soothe the reader while clandestinely taking on more serious concerns.

Subtle detonation? I don’t know enough about the genre to assess such claims. Good cover though. Bloodstains is new in the US from Minotaur.