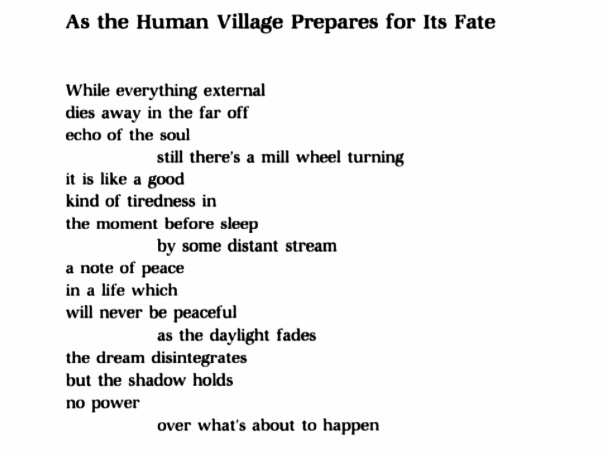 The smashed weirdness of the raving cadenzas of God
Takes over all of a sudden
In our time. It speaks through the voices of talk show moderators.

It tells us in a ringing anthem, like heavenly hosts uplifted,
That the rhapsody of the pastoral is out to lunch.
We can take it from there.

We can take it to Easy Street.
But when things get tough on Easy Street
What then? Is it time for realism?

And who are these guys on the bus
Who glide in golden hats past us
On their way to Kansas City?

Heaven must be like this, radio
To not care about anything
Because it’s all being taped for replay much later 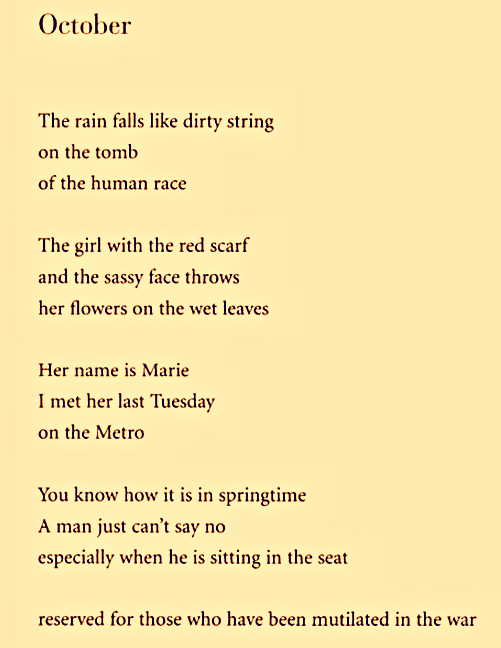 The day she went 5 for 5 against Vic Raschi

“Himself let him unknown contain”

Wyatt, with no insurance on his own head,
watching the execution of Anne Boleyn
from his cell in the Tower, while beyond
on Tower Hill her lovers also are executed,

reflects upon his wasted virtue and now
redundant innocence, rueful he ever did
let his name be known beyond the door of
his soul or hung his star from fate thrones.

This morning my dean told me that I needed to pack up my office over the summer as the building I’m in will be undergoing a renovation. Even though I knew this was coming, the prospect hit me as a series of big anxiety waves. My walls are covered with masks, art, pictures. I have file drawers of student work going back over a decade. And books. Lots and lots of books. Books and art and stuff that I don’t really have room for anywhere else, even for a season.

Three shelves in my office are doublestacked with old mass market paperbacks from my youth—-Vonnegut, Edgar Rice Burroughs, Hemingway, Jack London, Philip K. Dick, Richard Adams, Stephen Crane, etc. Shabby books, well worn, glue splitting. Over the years I’ve acquired nicer versions of the ones I want to reread, but my sentimental attachment to this small library of paperbacks doesn’t quite fade. When I taught high school, they were the bulk of my classroom library. I insisted on their return, and was always disappointed in students who seemed interested in certain novels but never quite managed to steal them. I was always thrilled when a student would ask to borrow one “over the summer” and then forget to return it.

This sorry shabby mass-market library has been depleted over my past decade teaching community college. Every semester, a few students ask if they can borrow something they see on the shelves when they stop by to chat. It is the most wonderful feeling to give a young person a copy of Brave New World (“I’ve heard it’s good”) or Cat’s Cradle (“Is it as good as Slaughterhouse Five?”) of Studies in Classic American Literature and then insist that they keep it and not worry about returning it.

This morning, a young man approached me after class and told me he’d noticed I had a copy of Do Androids Dream Electric Sheep? in my office—could he maybe borrow it? He made a point of calling it Do Androids Dream Electric Sheep? and not Blade Runner, despite the fact that it’s a movie tie-in. He seemed so happy when I repeated that the book was his now.

Earlier that morning I gave another student my copy of Howard Zinn’s A People’s History of the United States. He’s taken a couple of classes with me, and based on our conversations and his writing, I thought he could us the book more than I could. Again—young kid so happy to get a book, to think that someone thought he should read a particular book—I recall the feeling so vividly, from the other side. I love watching the old library dwindle away. Maybe I can give away more before I have to pack it up again.

After classes and office hours I swung by my beloved bookstore. I do this a lot on Fridays, in the spare hour that I have between work and picking up kids. I had a little mission this time—buying some books for a great old friend who turns forty this weekend. He loves hiking and camping and poetry—more than I love those things, I think—so I asked twitter to throw out some recommendations, which they did. I had fun browsing the “Nature” section. I ended up getting three: Tom Clark’s Fractured Karma (a favorite of mine), Gary Snyder’s Turtle Island (I had never heard of it until today), and Annie Dillard’s Teaching a Stone to Walk (I dug a few of the short essays I read in the store). I enjoyed buying books for my friend. I am almost 100% he never reads this blog so I’m sure my posting this will not spoil his present, and, if not, Happy Birthday.

While browsing the “Nature” section, I resisted Shelters Shacks and Shanties—for now. Apologies to D.C. Beard, whose hut diagrams are exquisite: 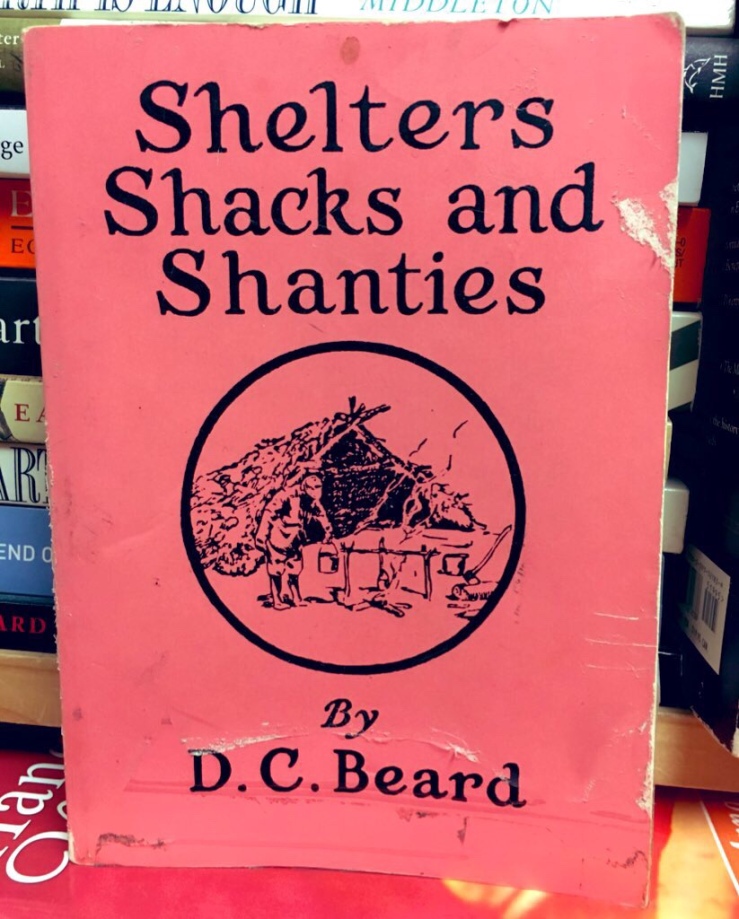 I of course selfishly picked up books for myself, although I didn’t browse for myself. I keep a silly geeky list of names to check in on, including Robert Coover. Even though I’m slogging my way through his first novel, The Origin of the Brunists, I still have a desire to read its sequel, The Brunist Day of Wrath. No wrath, but I picked up Plume editions of Pricksongs & Descants (which I’ve read but didn’t own) and Gerald’s Party (which I haven’t read and now own). The editions match the copy of  The Universal Baseball Association, Inc., J. Henry Waugh, Prop. I picked last summer (and no I have not read goddamn it).

This copy of Hard to Be a God, blurbed by Ursula K. Le Guin, will end up in a stack on my shelf of massmarket paperbacks, cheap pulp editions with colorful, zany, vibrant covers. Lovely unroughed, somehow pristine copies of Philip K. Dick and Stanislaw Lem and Ishmael Reed and Ursual K. Le Guin and J.G. Ballard and etcetera that’s been building up over the years, a private collection—but another library I’m sure I’ll eventually end up giving away. 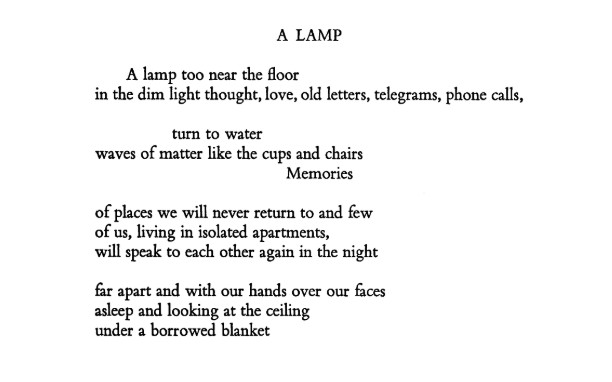 The American poet Tom Clark died in the first hour of Saturday, August 18th, 2018 in Berkely California. The cause of the death happened a few hours earlier, late Friday night, as a motorist collided his sedan into Tom Clark as Clark tried to cross the street. Clark was 77.

Tom Clark authored over two dozen poetry collections, many published by Black Sparrow Press. He also wrote a number of literary biographies, including a pair on Jack Kerouac, bios of Robert Creeley and Charles Olson, and a biography of John Keats called Junkets from a Sad Planet that is actually a series of poems. (But also actually a biography of Keats). Clark was the poetry editor for The Paris Review from 1963-1973 (maybe you read his interview with Allen Ginsberg there). Clark was also a blogger—an excellent blogger. He updated his blog a few hours before the car collision that killed him.

I first read Tom Clark in the middle of September, 2013. I read Fractured Karma (1990) and I had never heard of him before. I know the time specifically not because I have a good memory (I don’t), but because I wrote about it then:

I picked up Tom Clark’s Fractured Karma two weeks ago somewhat randomly. My local bookshop had reorganized some shelves, putting all the Black Sparrow titles together. Fractured Karma must have been on top, because I don’t see how else I would’ve picked up a book with the word “karma” in the title. The book opened to this page:

That’s all there is on that page, and something about it—the form, the phrasing—cracked me up. It’s part of a long poem called “He was born blind” about the British comedy actor George Formby. The poem is amazing: I read it there in the store. It reminded me immediately of David Markson’s notecard novels—something about how Clark includes so much reality into his poem. But there’s also this perceptive (if oblique) sense of humor behind it all. I ended up devouring the book, reading the whole thing that weekend. It was one of those holy shit reading moments, frankly. Once I finish typing this I’m going to go pick my kids up and we’re going to go to the bookstore and I’m going to get another Tom Clark book and read it this weekend.

I actually did go to the bookstore after writing that post and pick up another book by Clark, Sleepwalker’s Fate (1992). The store had several books by Clark, and I wasn’t sure which one to get. I remember that the title Sleepwalker’s Fate stood out, so I picked it up and thumbed through it, and I remember reading the poem “Terminator Too” there in the store—it did something electric to me—the goofy title, the winking irony, but also the earnestness of the poem, which paraphrases a few lines from Wordsworth’s Preface to Lyrical Ballads. Here it is:

“Terminator Too” by Tom Clark—

Poetry, Wordsworth
wrote, will have no
easy time of it when
the discriminating

powers of the mind
are so blunted that
all voluntary
exertion dies, and

the general
public is reduced
to a state of near
savage torpor, morose,

stuporous, with
no attention span
whatsoever; nor will
the tranquil rustling

of the lyric, drowned out
by the heavy, dull
coagulation
of persons in cities,

The later poetry collection Like Real People (1995) is also pretty great. It includes this humdinger: 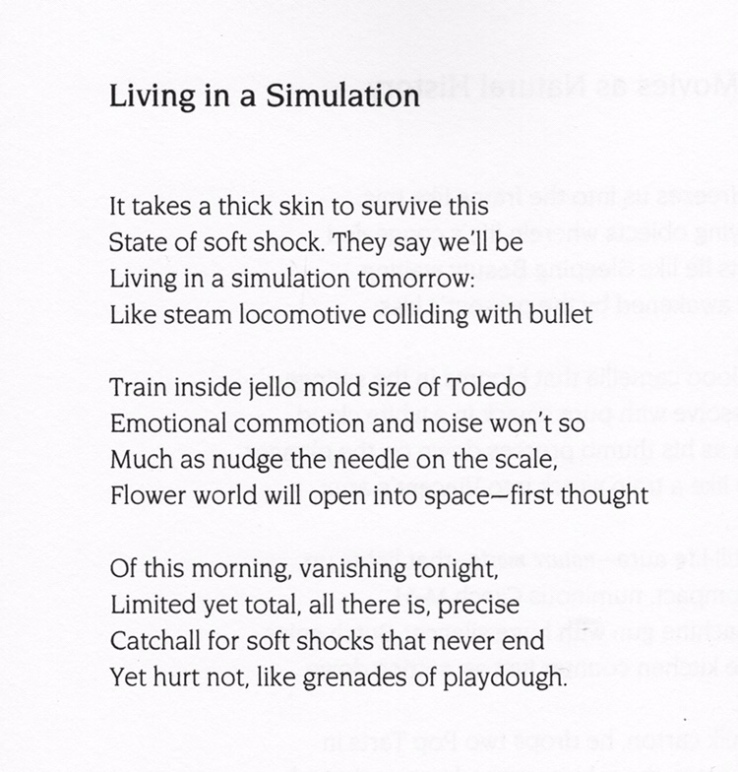 Like Real People also includes a series of autobiographical sketches and stories told in an engaging but straightforward manner. The epilogue there is particularly good—Clark mulls over what it means to write an autobiography, straining against his anxieties over framing his own life stories. Tellingly, he lards the essay with quotes and ideas from other folks. Clark’s poetry often takes on the form of translation, citation, history, or reinterpretation (as we see in “Terminator Too,” above), and works like Empire of Skin (1997) and Junkets on a Sad Planet (1994) are particularly ambitious. Empire of Skin is a series of poems that take on the history of the American fur trade through a lens critical of Manifest Destiny. Junkets on a Sad Planet is an impressionistic series of riffs on Keats’ short life (“junkets” is a pun). From Junkets—

What a lovely condensation of biography, history, and poetic anxiety!

I’ll close with one of my favorite Clark poems, “Heavy,” which discharges poetic anxiety. Clark dedicated the poem to Jack Kerouac and Charles Olson—the gods in the first line, perhaps?–figures he would later write biographies on.

Peace be with Tom Clark.