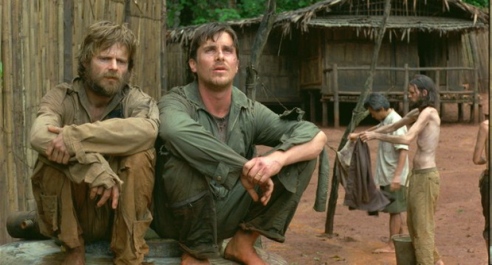 My expectations for Rescue Dawn were high–I love Herzog’s films, which mix high adventure with a sense of naturalistic realism and psychological surrealism–and I love Christian Bale, he of American Psycho fame, who plays Dengler. I suppose my expectations were too high, because Rescue Dawn wasn’t nearly as good as I thought it would be. My uncle was also slightly disappointed. It was by no means bad, but it wasn’t nearly as good as its reviews would make it seem; additionally, it’s practically a Hollywood action movie (complete with the big happy ending in front of an assembled audience of cheering extras)–something I wouldn’t have expected from Herzog. Bale is excellent though, as is co-star Steve Zahn, and the setting and pacing of the film make for an exciting afternoon. Then again, so does Missing in Action.

I may be going a little rough on Rescue Dawn–it’s better than 99% of the schlock out there, and in a summer crowded with franchise sequels, I think that moviegoers (i.e. people who go to the movies every week) should go check it out. Chalk my disappointment up to high expectations. Netflix addicted hermits like myself should probably just wait for the DVD.