Antoine Volodine’s short story “The Theory of Image According to Maria Three-Thirteen” is collected in Writers, a book available in English translation by Katina Rogers from Dalkey Archive Press.

Writers is one of the best books I’ve read in the past few years: unsettling, bizarre, satirical, and savage, its stories focus on writers who are more than writers: they are would-be revolutionaries and assassins, revolting humans revolting against the forces of late capitalism.

Writers (which I wrote about here) functions a bit like a discontinuous novel that spins its own web of self-references to produce a small large gray electric universe—the Volodineverse, I guess—which we can also see in post-exotic “novels” like Minor Angels and Post-Exoticism in Ten Lessons, Lesson Eleven.

Volodine’s post-exotic project refers obliquely to the ways in which the late 20th century damns the emerging 21st century. And yet the trick of it all is that the stories and sketches and vignettes seem ultimately to refer only to themselves, or to each other—the world-building is from the interior. This native interiority is mirrored by the fact that many of his writer-heroes are prisoners communicating from their cells, often to interrogators, but just as often to an unresponsive void.

“The Theory of Image According to Maria Three-Thirteen” takes place in such a void, a kind of limbo into which the (anti-)hero Maria Three-Thirteen speaks herself into existence. It’s an utterly abject existence; Maria Three-Thirteen crouches naked like “a madwoman stopped before the unknown, before strangers and nothingness, and her mouth and her orifices unsealed after death…all that remains for her is to speak.” She speaks to a semi-human tribunal, a horrorshow, creatures “without self-knowledge.” After several paragraphs of floating abject abstraction, Maria eventually illustrates her thesis—an evocation of speech without language, speech in a deaf natural voice–to this audience.

Her illustration is a list of scenes from 20th-century films.

I found this moment of the story initially baffling—it seemed, upon first reading, an utter surrender to exterior referentiality on Volodine’s part, a move inconsistent with the general interiority of Writers. Even though the filmmakers alluded to made and make oblique, slow, often silent, often challenging (and always beautiful) films, films aesthetically similar to Volodine’s own project, I found Volodine’s gesture too on-the-nose: Of course he’s beholden to Bergman, Tarkovsky, Bela Tarr!

Rereading the story, and rereading it in the context of having read more of Volodine’s work, I take this gesture as the author’s recognition of his aesthetic progenitors. Volodine here signals that the late 20th-century narrative that most informs his work is cinema—a very specific kind of cinema—and not per se literature.

This reading might be a misreading on my part though. Maybe Volodine simply might have wanted to make a list of some of his favorite scenes from some of his favorite films, and maybe Volodine might have wanted to insert that list into a story. And it’s a great list. I mean, I like the list. I like it enough to include it below. I have embedded the scenes alluded to where possible, and in a few places made what I take to be worthy substitutions.

And now, she begins again, to illustrate, I will cite a few images without words or almost without words, several images that make their deaf voice heard. You know them, you have certainly attended cinema showings during which they’ve been projected before you. These are not immobile images, but they are fundamentally silent, and they make their deaf voice heard very strongly.

The chess match with death in The Seventh Seal by Ingmar Bergman, with, in the background, a procession of silhouettes that undertake the arduous a scent of a hill.

The man on all fours who barks in the mud facing a dog in Damnation by Bela Tarr.

The baby that cries in a sordid and windowless apartment in Eraserhead by David Lynch.

The bare facade of an abandoned apartment building, with Nosferatu’s head in a window, in Nosferatu by Friedrich Murnau.

The boat that moves away from across an empty sea, overflowing with cadavers, at the end of Shame by Ingmar Bergman.

The desert landscape, half hidden by a curtain that the wind lifts in Ashes of Time by Wong Kar Wai.

The early morning travel by handcar, with the regular sound of wheels, in Stalker by Andrei Tarkovsky.

The old man with cancer who sings on a swing in Ikiru by Akira Kurosawa.

The blind dwarfs with their enormous motorcycle glasses who hit each other with canes in Even Dwarfs Started Small by Werner Herzog.

The train station where three bandits wait at the beginning of Once Upon a Time in the West by Sergio Leone.

The flares above the river in Ivan’s Childhood by Andrei Tarkovsky.

The prairie traveled over by a gust of wind in The Mirror by Andrei Tarkovsky.

She is quiet for a moment.

Tell me about your ideal film school.

This is something we can talk about later when we discuss Film Lesson, the programmes I made for Austrian television, but let me say here that there are some very basic skills that any filmmaker must have. First of all, learn languages. One also needs to be able to type and to drive a car. It is like the knights of old who had to be able to ride, wield a sword and play the lute. At my Utopian film academy I would have students do athletic things with real physical contact, like boxing, something that would teach them to be unafraid. I would have a loft with a lot of space where in one corner there would be a boxing ring. Students would train every evening from 8 to 10 with a boxing instructor: sparring, somersaults (backwards and forwards), juggling, magic card tricks. Whether or not you would be a filmmaker by the end I do not know, but at least you would come out as an athlete. My film school would allow young people who want to make films to experience a certain climate of excitement of the mind. This is what ultimately creates films and nothing else. It is not technicians that film schools should be producing, but people with a real agitation of mind. People with spirit, with a burning flame within them.

From Herzog on Herzog.

So you certainly don’t subscribe to the belief that your films are in any way ‘art films’?

Absolutely not, they are no such thing. I dislike intensely even the concept of artists in this day and age. The last King of Egypt, King Farouk, completely obese in exile, wolfing one lamb leg after another, said something very beautiful: ‘There are no kings left in the world any more, only the King of Hearts, the King of Diamonds, the King of Spades, and the King of Clubs.’ The whole concept of being an artist is also somehow outdated today. There is only one place left where you find artists: the circus. There you can find the trapeze artists, the jugglers, even the hunger artist. Film is not analysis, it is the agitation of the mind; cinema comes from the country fair and the circus, not from art and academicism. I truly feel that in the world of the painter or novelist or film director there are no artists. This is a concept that belongs to earlier centuries, where there was such a thing as virtue and pistol duels at dawn with men in love, and damsels fainting on couches.

Michelangelo, Caspar David Friedrich and Hercules Segers: these men are artists. ‘Art’ is a legitimate concept in their respective eras. They are like the emperors and kings who remain the crucial figures in the history of humankind and whose influence is felt even today, something that certainly cannot be said of monarchies today. I am speaking not about the death of the artist; I just feel that creativity is perceived with something of an outdated and antiquated perspective. That is why I detest the word ‘genius’. It too is a word that belongs to an earlier time and not to our own era. It is a sick concept nowadays, and this is why with utmost caution did I once call Kinski a ‘genius’. My use of the word comes close to my feelings about the man, but the expression itself and the concept behind it is something that heralds from the late eighteenth century and just does not fit comfortably today.

From Herzog on Herzog. 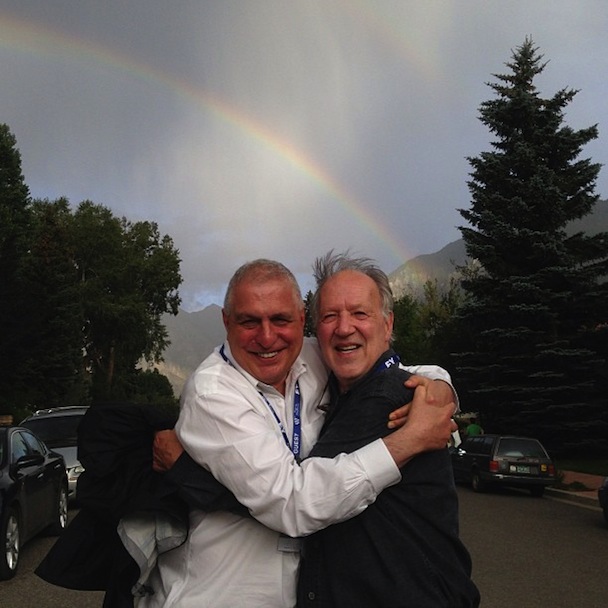