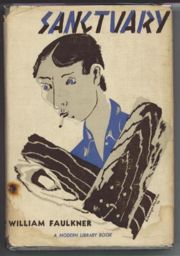 So I’ve been reading William Faulkner’s Sanctuary over the past few days. This was Faulkner’s breakthrough novel, the one that made him famous when it was published in 1931. He claimed that it was pot-boiler pulp fiction, written purely to make money, but who knows. I mean, we’re talking about a guy who chose to start spelling his name with a ‘u’ for some obscure reason–an author who worked from day one at creating the myth of himself as author. So who knows–maybe he actually thought he was writing a great piece of literature when he produced this lurid drivel.

Sanctuary is most famous for the rape of Southern debutante Temple Drake. She is raped with a corn cob. There you go. That’s pretty much all you need to know about this book. However, if you’re into elliptical and confusing depictions of violence, drunken debauchery, creepy voyeurism, and post-lynching sodomy, Sanctuary just might be the book for you.

There are two film adaptations of Sanctuary–1933’s The Story of Temple Drake, and 1961’s Sanctuary. Neither are readily available on VHS or DVD, and for good reason. They’re both pretty terrible. Still, the early sixties take on Sanctuary manages to capture the backwoods grotesque that saturates the novel. Actually, David Lynch could make a pretty decent film out of this.

My final analysis: I’m very very happy that I only have one more novel of Faulkner’s to read–Intruder in the Dust. Sanctuary did nothing but help consolidate my prejudice against Faulkner and my belief that the notion of Faulkner as an American Great is nothing but a scam.