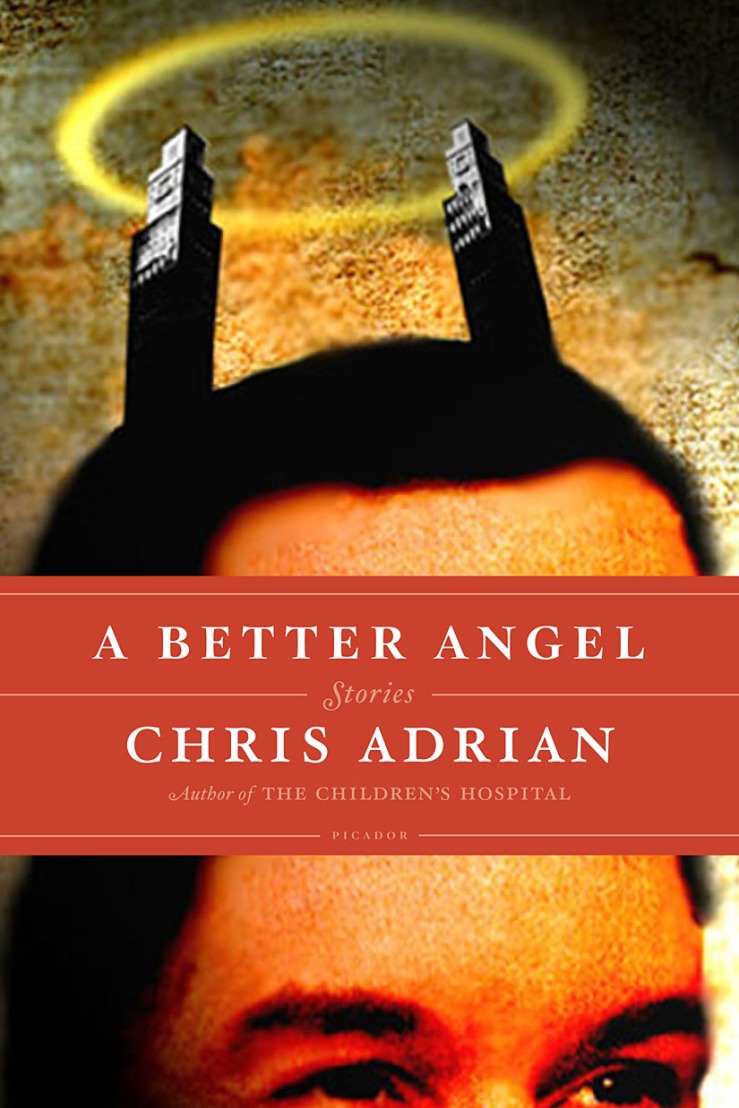 How does one grieve? This central question runs through the nine stories that comprise Chris Adrian’s A Better Angel (available now in trade paperback from Picador). For Adrian’s protagonists, mostly adolescents and children, the past is inescapable and insurmountable, and the future promises only depression at best and eternal suffering at worst. These are stories about hauntings. In Adrian’s world (and it is a fully-realized world in the same way that Tolkien’s Middle Earth is its own discrete place), ghosts, angels, and even wayward friends are all likely to to demonically possess some sad, troubled weird kid. Again and again, these stories force their protagonists–and their readers–to question how one might witness to death, disease, and disaster–and still keep a modicum of sanity.

Those who’ve read Adrian’s novels The Children’s Hospital and Gob’s Grief will find that the stories in A Better Angel work to flesh out a distinctly Adrianesque milieu. There are hospitals and doctors and nurses, dead brothers and absent parents, events of epic destruction and personal crises of illness, drugs and alcohol, ouija boards, and plenty of angels and demons. Adrian’s narratives explore a fine line between metaphysics and pure biology that each protagonist has to navigate. In “The Sum of Our Parts,” nurses and doctors wonder how our body parts make us individuals as a ghost tries to escape her coma-bound body. The fraudulent doctor of “A Better Angel” uses drugs as a way of subduing the angel who haunts him. “I make my living praising the beauty of well children,” he says. “I love babies and I love ketamine, and that’s really why I became a pediatrician, not because I hate illnesses, or really ever wanted to make anybody better.” Indeed, Adrian’s characters seem doubtful that anyone can make anyone else better, but it doesn’t stop them from trying. There’s the father of “The Changeling,” whose son is possessed by the ghosts of those murdered in the 9/11 attacks on the World Trade Center, who parcels out his own body as a sacrifice to appease the dead. The story recognizes though that it’s not really the dead he is honoring–he’s really showing his love for his son–but this measure of love is not enough for the dead. “The Changeling” is one of three stories in A Better Angel addressing the 9/11 attacks (we’ll write more about this trio in an upcoming post, and we’ve already addressed one of the stories here), but the September 11th victims are hardly the only ghosts here. In “A Hero of Chickamauga,” Civil War re-enactors try to commune with the dead and somehow bring personal justice to something beyond comprehension. “A Child’s Book of Sickness and Death” posits disease as the ultimate affront to cosmic justice. Its protagonist Cindy, an ailing “short gut girl” who lives in semi-permanent residence at a children’s hospital, remarks to no one in particular after the death of a young child,

“It seems to me, who should really know better, that all the late, new sadness of the past twenty-four hours ought to count for something, out to do something, ought to change something, inside of me, or outside in the world. But I don’t know what it is that might change, and I expect that nothing will change–children have died here before, and hapless idiots have come and gone, and always the next day the sick still come to languish and be poked, and they will lie in bed hoping not for healing, a thing which the wise have all long given up on, but for something to make them feel better, just for a little while, and sometimes they get this thing, and often they don’t.”

Cindy’s is just one of many negative epiphanies here. It’s also worth noting that this Cindy is but one of several Cindys populating this book, and she also seems to be another version of a short gut syndrome Cindy who appears in The Children’s Hospital. In fact, most of the primary characters in “A Children’s Book of Sickness and Death” are also present in The Children’s Hospital, underscoring the sinew that connects Adrian’s milieu.

This holistic vision marks Adrian as an accomplished–and challenging–author. Adrian’s challenge is not so much an issue of readability; we found ourselves quickly devouring these stories. No, what we have here are tales that many will find hard to digest, the sort of stuff that some readers will find too bitter to ruminate and puzzle out. Adrian, through his protagonists’ bleak outlooks, doesn’t offer a cure or even much solace from the pain and sickness in the world, but he does offer some temporary, if mild, relief, a sort of reckoning with that pain and sickness. Although the angels and demons and ghosts of Adrian’s world cannot be ignored or dismissed, they can be confronted, even if that confrontation must repeat without solution. Instead of pandering to his readers with Panglossian platitudes or metaphysical escape hatches, Adrian dramatizes the realities of our mortality in a way that compels both sympathy and repulsion, and above all, some deep thinking. Highly recommended.