Set in the 1950s, Hunter S. Thompson’s second novel The Rum Diary chronicles the drunken misadventures of Paul Kemp, a journalist who moves from New York City to Puerto Rico to write for a small newspaper. While there, Kemp gets involved with a crazy couple who fight all the time (he develops a serious crush on the girl), attends a rum festival, and winds up in jail. Along the way there’s enough drinking to put Hemingway’s characters to shame, and plenty of nude swimming to boot.

Although The Rum Diary was written in the early sixties, it wasn’t published until 1998, long after the infamous gonzo godfather had made his indelible mark on the American literary consciousness. Thompson was 22 when he wrote The Rum Diary, a significant eight years younger than his stand-in in the novel, jaded journalist Paul Kemp. And while it’s easy to imagine that HST was born a cranky old man, at times Kemp’s world-weariness reads more like an affected pose rather than an earned cynicism. 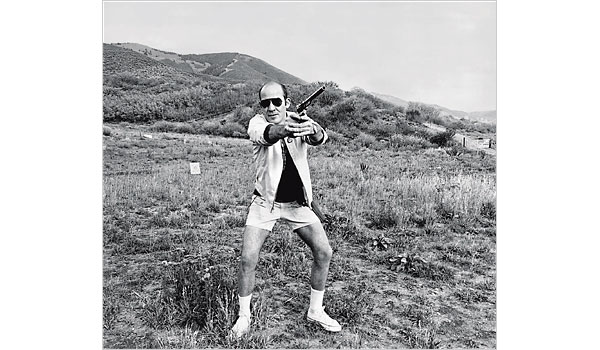 The novel works best when HST focuses on denigrating the cretins, phonies, perverts, and degenerates that are never in short supply in his sick universe. Where the average travel writer might see a joyous festival throbbing with life and humanity, HST finds dread and disgust, fear and loathing. His frenzied yet steady prose moves quickly, adding to the general manic tone of the novel, and, despite its 200+ pages, The Rum Diary is an easy weekend read. Additionally, HST’s reflections on American imperialism and tourism in general remain relevant and fresh over forty years later.

The Rum Diary is hardly the HST starting place, but this is quite obvious (if, dear reader, this is not obvious to you, get thee to a bookstore posthaste and obtain Fear and Loathing in Las Vegas). However, for casual fans The Rum Diary will make an interesting beach read.  [Editorial note: Yes, this review is a few years old. There’s a movie now, clearly].

1 thought on “Hey, We Reviewed That Book The Rum Diary by Hunter S. Thompson, the One That Hollywood Turned into a Johnny Depp Movie”