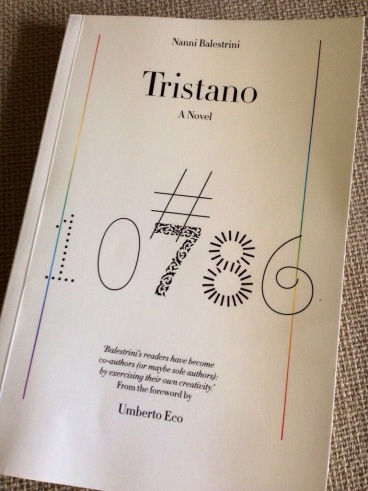 Let’s start with some facts:

Nanni Balestrini originally composed Tristano in the 1960s with the aid of an algorithm supplied to an IBM computer.

There are ten chapters in the novel.

Each chapter is comprised of twenty paragraphs.

Balestrini’s algorithm shuffles fifteen of those paragraphs within each chapter.

Maybe a few more facts, and then some opinions—and citations from the novel—no?

The book is exactly 120 pages.

In his contemporary “Note on the Text” of Tristano, Balestrini says that the book is “an ironic homage to the archetype of the love story.”

The title of course alludes to the legend of Tristan and Iseult.

In his note, Balestrini uses the term “experiment” at least three times, suggesting that “to experiment with a new way of conceiving literature and novels” can make it more “possible to represent effectively the complexities and unpredictability of contemporary reality.”

Balestrini’s 2004 novel Sandokan is in my estimation one of the finest books of the past decade: A poetic examination of criminal brutality told in a bold voice, its syntactical experiments not experiments at all, but rather the base of a strong, strange tone that perfectly synthesizes plot and voice.

In chapter 2 of my edition of Tristano—on page 19 of version #10786—we get a paragraph that begins: “To be one-sided means not to look at problems all-sidedly.”

Does Tristano, through its formal, discursive, algorithmic structure seek to approach an all-sided perspective? Significantly, we can’t be sure who says the line. There are two characters, male and female, both named C (an algebraic variable?).

There seems to be an argument here, an investigation. A crime, a love affair. But Tristano is a dialectic without synthesis. Or maybe that failure is mine. Maybe I’ve failed as the reader. Neglected my part. “Treat life as if it were a game,” we’re told in the aforementioned paragraph (page 19 of version #10786, if you’re keeping score). Or maybe we’re not told. Maybe C is telling C to treat life as a game (and not just telling the reader), but the context is not (cannot) be clear.

But again, that’s probably maybe almost certainly but okay maybe not quite the point of Tristano. From paragraph 18 of chapter 6 (page 71 of version #10786): “First of all one must have a fairly clear idea of the content of the text.” And a few lines down: “Her story weaves and unweaves like the tapestry she was working on.” And: “It’s the unconditional loss of language that starts.” And: “It might never have an end.” Freeing these lines from the sentences around them ironically stabilizes them.

Tristano isn’t just line after line of Postmodernism 101 though. There is actual imagery here, content. In fairness, let me share entire paragraph (from page 69  of version #10786):

In the internal part of the cave along with an abundance of Pleistocene fauna a human Neanderthaloid tooth was recovered. You’ve already told me this story. The cave is divided into two levels one upper and one lower that host a subterranean lake which can be visited by boat. It might even be another story. They had warned him it wouldn’t be a walk in the park. Inside you can go down into a great cavern in the centre of which there is a rock surmounted by a giant stalagmite. We’ll stay and look for another thirty seconds then we’ll leave. All the stories are different one from the other. On returning he found that C had bought herself a new blue silk dress. C remained standing while he explained to her how it had gone. She ran a finger over his lips to wipe the lipstick off them. I have to go. It’s still early. I’ll be away all day perhaps tomorrow too. He gave her a long kiss on the lips.

This paragraph is maybe almost kind of sort of a synecdoche of the entire book—sentences that seem to belong to other paragraphs, story threads that seem part of another tapestry. Let us pull a thread from another paragraph, another chapter (chapter 9, paragaph 8, page 102 of  of version #10786):

All imaginable pathways of the line that represents a direct connexion to the objective are equally impracticable and no adjustment of the shape of the body to the spatial forms of the surrounding objects can allow the objective to be reached.

Do you believe that? Did Balestrini? Or did it just allow him a neat little piece of rhetoric to gel with the concept of his experiment? The verbal force, dexterity, and dare I claim truth of Sandokan, composed a few decades later, suggests that yes, language can be shaped to mean.

And this, I think, is the big failure of Tristano—it’s a text afraid to mean, to even take a shot at meaning. Content to be simply an experiment, its sections adding up to nothing more than the suggestion that its sections could never add up to anything, Tristano offers little beyond its concept and a few observations on storytelling that dwell on paralysis instead of freedom. The whole experiment strikes me as the set up for a joke played on the reader: Look at all this possibility, look at all these iterations—and what’s at the core? Nothing.

I hate to end on such a negative note. I’m thankful that Verso published Tristano, which I think shows courage as well as a commitment to literature that you just aren’t going to see from a corporate house.  I’m thankful that I got to read (version #10786 of) Tristano, and I plan to order his novel The Unseen via my local bookstore. The expectations that I brought to the book were huge: Loved the concept, loved the last book I’d read by the author—and I want to read more by the author. Indeed, it’s entirely possible that I  failed Tristano’s experiment. But I would’ve been happier to learn something or feel something from that failure other than disappointment.