For intricacy, such a knot he had never seen in an American ship, nor indeed any other. The old man looked like an Egyptian priest, making Gordian knots for the temple of Ammon. The knot seemed a combination of double-bowline-knot, treble-crown-knot, back-handed-well-knot, knot-in-and-out-knot, and jamming-knot.

At last, puzzled to comprehend the meaning of such a knot, Captain Delano addressed the knotter:—

“What are you knotting there, my man?”

“The knot,” was the brief reply, without looking up.

“For some one else to undo,” muttered back the old man…

This knot serves as a metaphor for the text of Benito Cereno itself. We readers (along with our hapless surrogate Captain Delano) are the ones tasked with unknotting the text’s central mystery.

Part of the great pleasure of reading Benito Cereno for the first time rests in Melville’s slow-burning buildup to the eventual unknotting. I was fortunate enough to have been ignorant of the plot (and eventual revelation) of Benito Cereno when I first read it over a dozen or so years ago (although even then I cottoned on to what was really happening earlier than Captain Delano did). I read the novella again last week and marveled at Melville’s narrative control, enjoying it anew by seeing it anew.

Benito Cereno is a sharply-drawn tale about the limits of first-person consciousness and the cultural blinders we wear that prevent us from seeing what is right in front of us. The book subtly critiques the notion of a naturally-ordered morality in which every person has a right and fitting place, whether that be a place of power or a place of servitude. Melville shows the peril and folly of intrinsically believing in the absolute rightness of such a system. There is comfort in belief, but unquestioning belief makes us radically susceptible to being wrong. When we most believe ourselves right is often when we are the most blinded to the reality around us. We cannot see that we cannot see. And Benito Cereno is about how we see—about how we know what we know. Melville’s novella is also about how seeing entails not seeing, and, further, not seeing what we are not seeing—all that we do not know that we do not know. Melville makes his readers eventually see these unknown unknowns, and, remarkably, shows us that they were right before our eyes the entire time.

Forgive me—much of the previous paragraph is far too general. I want you to read Benito Cereno but I don’t want to spoil the plot. Let’s attempt summation without revelation: The novella is set in 1799 off the coast of Chile. Amasa Delano, captain of the American sealing vessel the Bachelor’s Delight, spies a ship floating adrift aimlessly, apparently in distress. Captain Delano boards one of his whale boats and heads to the San Dominick, a Spanish slaving ship, and quickly sees that the enslaved Africans on board dramatically outnumber the Spanish sailors. Delano offers aid to the San Dominick’s captain, Benito Cereno, who tells Delano that most of the Spanish crew perished in a fever (along with the “owner” of the slaves, Alexandro Aranda). Benito Cereno himself seems terribly ill and not entirely fit to command, so Delano waits aboard the San Dominick while his men fetch food and water from the Bachelor’s Delight. In the meantime, he tours the ship and talks with Benito Cereno and Cereno’s enslaved valet Babo.

Delano is frequently troubled by what he sees on the ship, but his good nature always affords him a natural and acceptable answer that assuages the sinister tension tingling in the background. Even though he’s troubled by the “half-lunatic Don Benito,” Delano’s “good-natured” sense of moral authority can explain away what he sees with his own eyes:

At last he began to laugh at his former forebodings; and laugh at the strange ship for, in its aspect, someway siding with them, as it were; and laugh, too, at the odd-looking blacks, particularly those old scissors-grinders, the Ashantees; and those bed-ridden old knitting women, the oakum-pickers; and almost at the dark Spaniard himself, the central hobgoblin of all.

For the rest, whatever in a serious way seemed enigmatical, was now good-naturedly explained away by the thought that, for the most part, the poor invalid scarcely knew what he was about…

These paragraphs not only summarize some of the images that give Delano pause, they also show Melville’s remarkable prose style, which follow’s Delano’s psychological state: laughing dismissal returns back to anxious image; anxious image gives way again to relieved certitude. All that is “enigmatical” in life can be “good-naturedly explained away.” And yet as the narrative progresses, good-natured explanations will fail to answer to visceral reality. Melville’s slow burn catches fire, burning away the veils of pretense.

The rest of this post (after the image) contains significant spoilers. I highly recommend Benito Cereno, which is reprinted in any number of Melville collections (I read it again in Rinehart’s Selected Tales and Poems), including The Piazza Tales (which you can download for free at Project Gutenberg). While I think that Benito Cereno has gained more recognition in recent years, it remains under-read compared to Melville’s more famous novellas Bartleby and Billy Budd. Those are great books too, but I’d argue that Benito Cereno, with its critique of white supremacy, is more timely than ever. Check it out. (Again, spoilers ahead). 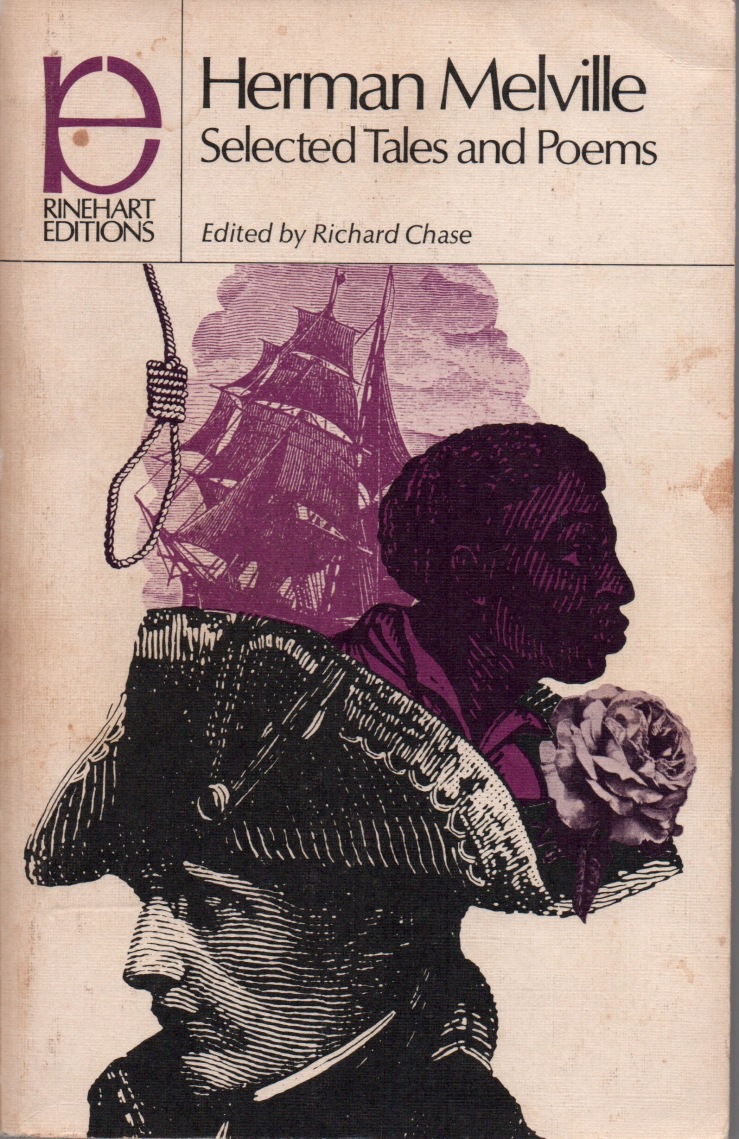 The third paragraph of Benito Cereno characterizes its central figure (and implicit audience surrogate) Delano as a man comfortable with the morality of his age:

Captain Delano’s surprise might have deepened into some uneasiness had he not been a person of a singularly undistrustful good-nature, not liable, except on extraordinary and repeated incentives, and hardly then, to indulge in personal alarms, any way involving the imputation of malign evil in man. Whether, in view of what humanity is capable, such a trait implies, along with a benevolent heart, more than ordinary quickness and accuracy of intellectual perception, may be left to the wise to determine.

The “wise” here are of course the readers that can untangle the knot. In any case, Melville’s third-person narrator sticks closely to Delano, peering just over his shoulder, limited to what his “singularly undistrustful good-nature” can perceive. Melville’s prose genius lies in showing us not only what Delano sees, but also how he sees. Delano’s culturally-constructed psychological program resists comprehending any scene that overtly challenges white authority.

Consider how Delano first regards the Africans on board the San Dominick. His eyes rest on “the conspicuous figures of four elderly grizzled negroes” and then on “six other blacks; each with a rusty hatchet in his hand.” Melville’s narrator depicts the scene in great detail, pointing out that the men are each polishing and sharpening a “small stack of hatchets” in unison. Yet Delano barely takes any of this in:

But that first comprehensive glance which took in those ten figures, with scores less conspicuous, rested but an instant upon them, as, impatient of the hubbub of voices, the visitor turned in quest of whomsoever it might be that commanded the ship.

Delano looks for the captain, the white authority from which he will get the version of the story that fits his world view. Even though Delano knows of the “lawlessness and loneliness” of the seas, he is confident that the natural rule of white order will prevail in all circumstances. And when he does meet Benito Cereno, and sees that the man is in poor mental and physical health, he elects to lend his own white authority to the scene, until the natural order might be restored.

Delano repeatedly overlooks or ignores the signs around him that would reveal what should be an obvious truth: the enslaved Africans have mutinied and killed most of the crew. Babo the “faithful slave” won’t leave Cereno’s side, but this apparent adoring care isn’t the real story. Babo won’t leave Cereno alone because Babo is controlling his puppet. Delano simply cannot conceive of Babo as a complex controlling intelligence because he cannot see Babo as a fellow human with the same potential for genius that any other human might have. Delano repeatedly likens the enslaved Africans on board the San Dominick to docile animals—gentle deer or faithful dogs. (Melville’s narrator tells us that, “Captain Delano took to negroes, not philanthropically, but genially, just as other men to Newfoundland dogs”). Delano (quite literally) cannot imagine that black people might assert their own moral and intellectual agency, even to gain their freedom.

Babo and the other enslaved Africans are indeed fighting for their freedom, an insurrection that broadly parallels the American Revolution. Written and published in the years that immediately preceded the Civil War, with the Nat Turner Rebellion fresh in memory, Benito Cereno obliquely critiques the idealism of the US’s founding document which declared it “self-evident, that all men are created equal.” What is evident to the self depends on which self. What we see and how we see are culturally constructed. Captain Delano, a Massachusetts native, is culturally constructed to not see the black people around him as agents of their own destiny who might pursue their own happiness, life, and liberty. Delano is emblematic of a particularly racist mindset, a “good-natured” man so at ease with white supremacy that he simply cannot recognize it as anything but part of the world’s natural order. He is thus blind—and ultimately vulnerable—to the visceral world around him, a world loaded with signs and symbols he casually overlooks, like the carvings on the San Dominick’s “shield-like stern-piece,”

uppermost and central of which was a dark satyr in a mask, holding his foot on the prostrate neck of a writhing figure, likewise masked.

Here again we have a symbolic metaphor of the entire text—and not just for the text itself, but also a metaphor for how to read the text. Whose foot? Whose neck? What masks? The potential for ambiguous interpretation here extends throughout the narrative of Benito Cereno, whose characters’ play-acting could not be for higher stakes. Performance is reality.

Melville’s depiction of a slave rebellion is not a political screed, nor a sentimental morality play, nor a cloying allegory. Like the many symbols loaded within it, Benito Cereno might easily be misinterpreted. Some readers might wish to valorize Delano’s “good-natured” attitude toward the world, no matter how naive and unperceptive it ultimately is. Other readers might find in Babo a figure of cruel evil, perhaps recognizing an echo of Shakespeare’s Iago in his controlling intelligence. (Babo, like Iago, refuses to speak ever again after being caught by authorities). And other readers, perhaps expecting an explicitly anti-slavery tract, might critique Melville for never inhabiting the consciousness of the rebels.

Any of these critiques though would have to disengage from what Melville is first and foremost showing in Benito Cereno: the ways in which certain first-person consciousnesses become elevated into the privileged space of third-person narrative. Benito Cereno is told in a third-person voice that utterly privileges Delano’s viewpoint and values. (Melville even incorporates passages from the historical Captain Delano’s 1817 memoir, one of the sources for his novella). In Benito Cereno, Melville challenges our assumptions about not just authority and rebellion, but how we narratively determine these concepts. The great rhetorical trick of the novel is that Melville embeds his epistemological critique inside of the very voice he is seeking to expose and evaluate—the voice of received wisdom, of “good-natured” white authority. Ultimately, Benito Cereno is not just a suspense story about freedom and slavery, but a story that calls attention to what it actually means to know what we (think we) know. It is a story about radical doubt. Highly recommended.