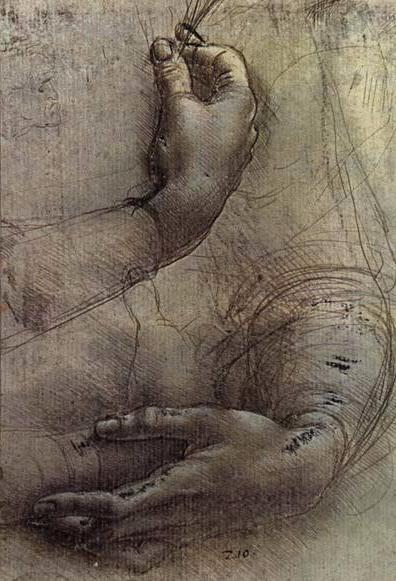 That which is entirely devoid of light is all darkness; as the night is like this and you wish to represent a night subject, represent a great fire, so that the object which is nearest to the fire may be tinged with its colour, since the object which is nearest the fire will participate most in its nature. And as you will make the fire red, all the objects which it illumines must be red also, and those which are farther off from the fire will be dyed to a greater extent by the dark colour of night. The figures which are between you and the fire appear dark from the obscurity of the night, not from the glow of the firelight, and those which are at the side are half dark and half ruddy, and those which are visible beyond the edge of the flames will be altogether lighted up by the red glow against a black background. As to their action, make those which are near shield themselves with their hands and cloaks against the intense heat with averted faces as though about to flee; with regard to those who are farther off, represent them chiefly in the act of raising their hands to their eyes, dazzled by the intense glare.

From Baring’s translation of Leonardo’s notebooks.

OF GAMES TO BE PLAYED BY THOSE WHO DRAW.

When, Oh draughtsmen, you desire to find relaxation in games you should always practise such things as may be of use in your profession, by giving your eye good practice in judging accurately of the breadth and length of objects. Thus, to accustom your mind to such things, let one of you draw a straight line at random on a wall, and each of you, taking a blade of grass or of straw in his hand, try to cut it to the length that the line drawn appears to him to be, standing at a distance of 10 braccia; then each one may go up to the line to measure the length he has judged it to be. And he who has come nearest with his measure to the length of the pattern is the best man, and the winner, and shall receive the prize you have settled beforehand. Again you should take forshortened measures: that is take a spear, or any other cane or reed, and fix on a point at a certain distance; and let each one estimate how many times he judges that its length will go into that distance. Again, who will draw best a line one braccio long, which shall be tested by a thread. And such games give occasion to good practice for the eye, which is of the first importance in painting.

From J.G. Ballard’s short story “The Gioconda of the Twilight Noon”:

‘There’s a postcard from your mother. They’re near Malta, somewhere called Gozo.’

‘Give it to me.’ Maitland felt the card in his hands.

‘Gozo – that was Calypso’s island. She kept Ulysses there for seven years, promised him eternal youth if he’d stay with her forever.’

‘I’m not surprised.’ Judith inclined the card towards her. ‘If we could spare the time, you and I should go there for a holiday. Wine–dark seas, a sky like heaven, blue rocks. Bliss.’

‘Yes. I suppose it’s the bad printing. They can’t really be like that.’

Still holding the card, Maitland went out into the garden, feeling his way along the string guiderail. As he settled himself in the wheelchair he reflected that there were other correspondences in the graphic arts. The same blue rocks and spectral grottos could be seen in Leonardo’s Virgin of the Rocks, one of the most forbidding and most enigmatic of his paintings. The madonna sitting on a bare ledge by the water beneath the dark overhang of the cavern’s mouth was like the presiding spirit of some enchanted marine realm, waiting for those cast on to the rocky shores of this world’s end. As in so many of Leonardo’s paintings, all its unique longings and terrors were to be found in the landscape in the background. Here, through an archway among the rocks, could be seen the crystal blue cliffs that Maitland had glimpsed in his reverie.

When wine is drunk by a drunkard, that wine is revenged on the drinker.

An artizan often going to visit a great gentleman without any definite purpose, the gentleman asked him what he did this for. The other said that he came there to have a pleasure which his lordship could not have; since to him it was a satisfaction to see men greater than himself, as is the way with the populace; while the gentleman could only see men of less consequence than himself; and so lords and great men were deprived of that pleasure.

A man wishing to prove, by the authority of Pythagoras, that he had formerly been in the world, while another would not let him finish his argument, the first speaker said to the second: “It is by this token that I was formerly here, I remember that you were a miller.” The other one, feeling himself stung by these words, agreed that it was true, and that by the same token he remembered that the speaker had been the ass that carried the flour.

It was asked of a painter why, since he made such beautiful figures, which were but dead things, his children were so ugly; to which the painter replied that he made his pictures by day, and his children by night.

An old man was publicly casting contempt on a young one, and boldly showing that he did not fear him; on which the young man replied that his advanced age served him better as a shield than either his tongue or his strength.

A man was desired to rise from bed, because the sun was already risen. To which he replied: “If I had as far to go, and as much to do as he has, I should be risen by now; but having but a little way to go, I shall not rise yet.”

A man, seeing a woman ready to hold up the target for a jousting match, exclaimed, looking at the shield, and considering his spear: “Alack! this is too small a workman for so great a business.”

From the Notebooks of Leonardo da Vinci.

A head, full face, of a young man
with fine flowing hair,
Many flowers drawn from nature,
A head, full face, with curly hair,
Certain figures of Saint Jerome,
The measurements of a figure,
Drawings of furnaces.
A head of the Duke,
many designs for knots,
4 studies for the panel of Saint Angelo
A small composition of Girolamo da Fegline,
A head of Christ done with the pen,
8 Saint Sebastians,
Several compositions of Angels,
A chalcedony,
A head in profile with fine hair,
Some pitchers seen in perspective,
Some machines for ships,
Some machines for waterworks,
A head, a portrait of Atalanta raising her
face;
The head of Geronimo da Fegline,
The head of Gian Francisco Borso,
Several throats of old women,
Several heads of old men,
Several nude figures, complete,
Several arms, eyes, feet, and positions,
A Madonna, finished,
Another, nearly in profile,
Head of Our Lady ascending into Heaven,
A head of an old man with long chin,
A head of a gypsy girl,
A head with a hat on,
A representation of the Passion, a cast,
A head of a girl with her hair gathered in a knot,
A head, with the brown hair dressed.

From The Notebooks of Leonardo da Vinci.