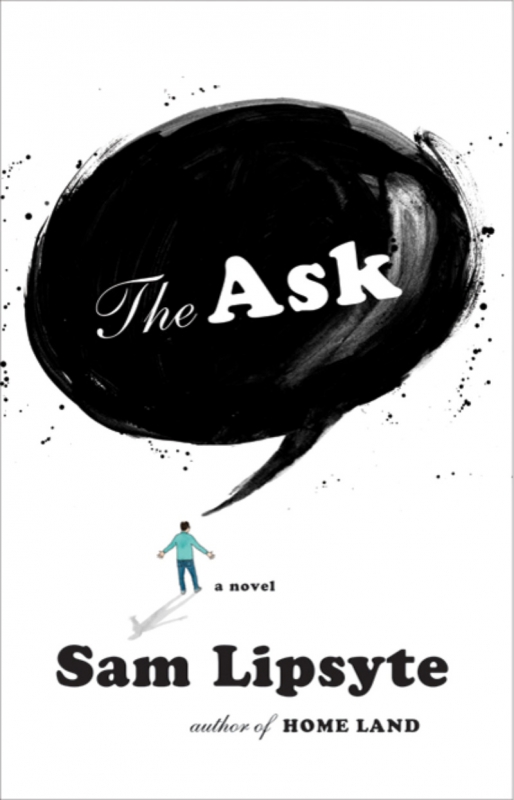 I listened to the audiobook version of Sam Lipsyte’s hilarious, wistful, mean, and devastating novel The Ask last week. I invented chores and took any scenic route available when driving to get more of the book faster, frequently laughing out loud, or grimacing, or even feeling weird and shameful pangs of remorseful identification with the book’s protagonist and narrator, Milo Burke. I’m going to do my best to unpack the book’s themes–particularly the way it simultaneously eulogizes, valorizes, and mocks the American Dream–but first I need to get something out-of-the-way, a mea culpa of sorts.

As I mentioned, I listened to the book, but I don’t have a copy, so, shamefully, I can’t really quote any of Lipyste’s marvelous sentences. He is a master stylist, capable of zapping our dead modern idioms with the kind of alarming twists that highlight just how vacant language has become. Lipsyte also has a gift for rhythm, tone, and cadence, and he’s a master of the deadpan punchline. While the sentences in his last novel Home Land sometimes felt overly fussed over, straining under their own polish, The Ask showcases an effortless style that both seduces and repels. Lipsyte reads The Ask audiobook himself, yet lets the tone and cadence of his words dictate the tone and timbre of his voice. It’s all very good. And you’ll have to just take my word for all that as I have nothing to quote now (I’m sure I’ll re-review the book when I pick it up in paperback, though).

The plot is rather thin: Milo Burke, who once aspired to being a celebrated painter, now works for the grants department of a mediocre liberal arts college. His job, essentially, is to beg wealthy parents and alumni to donate massive gifts of cash to the school — this is “the ask.” Or rather, that was his job before he got fired for losing his cool with the spoiled brat daughter of a major patron. This leaves Milo moping around Queens, drinking too much, and pissing off the wife he is slowly becoming estranged from. Which is a shame, because he’s trying to be a good husband and father to his young son; despite his own shitty childhood–boozing, philandering father, emotionally absent mother–Milo is doing his best to give his family the American Dream. He’s more or less abandoned his own dreams of being a painter, and along with it, the weird faith he located in the various theorists–Marxists, feminists, deconstructionists, etc.–who informed his art school years. Much of the novel finds Milo pondering not just on the value (or lack thereof) in his liberal arts education, but also on the friends and anti-friends who he slummed with in those days. Just as the narrator of Home Land dwells on his high school days, Milo Burke can’t quit thinking about his college years in The Ask.

That past returns in the form of Purdy, a rich kid who slummed with Milo and his druggy art kid friends back in their college days. Purdy is incredibly wealthy even after the stock market crashes of the late 2000s, and has Milo specifically reinstated by the university to officiate an intended “give” (the answer to “the ask”). Purdy’s real intention though is to turn Milo into a kind of bag man, a go-between to deliver large sums of cash to Purdy’s caustically embittered illegitimate son Don, an Iraq War vet who’s lost both his legs to an IED. This arrangement thrusts Milo into Purdy’s surreal world of privilege and power, but also puts him into contact with a deranged, maimed, and deeply, deeply hurt young man who will, essentially, change the way that he examines the world and his role in it.

I’m now going to gloss over much of the book: there are many, many very funny situations, strange characters, and wonderful little insights. And now that theme I mentioned: the death of the American Dream.

Late in the novel, Milo calls America “Dead America.” Earlier in the novel, he complains that America never got to be Rome; that America is a dying, crumbling empire that never even got to revel in its hedonist excesses. Milo is keenly aware that his own white, white-collar, privileged, urban existence as a liberal-arts-educated American puts him in a position of greater material comfort than 99.9% of the rest of the people in the world, yet this fact does nothing to assuage his despair–in fact, it exacerbates it. Milo is ashamed of his despair, too-cognizant of its implications. His shame becomes a meta-, self-referential shame, and it leads to Milo essentially surrendering any power or agency he might have claimed in the universe. His liberal arts education and his own sensitivities render him feckless and bitter, always grumbling over the cosmic injustice of modern, Dead America. He is a walking, rambling critique of power, yet–as his wife likes to point out–he never does anything about the injustice he perceives. It’s only after interacting with Don that Milo begins to see an inroad to agency.

Don is, it must be said, a miserable, caustic human being, a racist blackmailer, and perennially cruel to anyone who extends a hand. He’s also performed the most real “give” in the novel–he’s lost his legs for Dead America, sacrificing his own mobility and freedom (those constituents of the dream) for the freedom of others, or at least for the illusion of other people’s freedom. Don’s toxic behavior makes him utterly repellent and thoroughly anti-heroic, but in Milo’s identification with the young man–and in Milo’s willingness to lose financial security and familial stability by essential siding with Don over Purdy– there is a glimmer (just a glimmer) of redemption and agency for Milo. Don embodies everything about America that Milo (and presumably Lipsyte) hates, yet he has also answered “the ask,” both literally and symbolically. The novel invokes then not just scathing ironic attack on the American Dream, but also a pity that reveals an intrinsic (and perhaps childish) wish to believe, a wish to make Dead America live again. The novel ends with Milo reclaiming (or maybe just claiming) some degree of agency, beginning with getting back an old war knife his father had given him, a clear symbol of paternal, phallic power (the kind that his liberal arts education told him was bad, bad, bad). And yet there’s no resolution, no pat answers–how could there be? Instead, the novel ends in another crisis–not Milo’s this time, but Don’s. But I won’t spoil that, because, hey, you’re going to read this now, aren’t you? Very highly recommended.