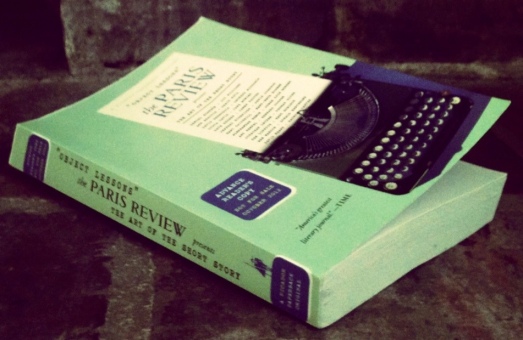 Object Lessons anthologizes 20 stories published in the Paris Review over the past fifty years. “It is not a greatest hits anthology,” advises the brief editor’s note, “Instead, we asked twenty masters of the genre to choose a story from the Paris Review archives—a personal favorite—and to describe the key to its success as a work of fiction.” Hence, we get Ann Beattie introducing Craig Nova’s “Another Drunk Gambler,” Amy Hempel introducing Bernard Cooper’s “Old Birds,” and Sam Lipsyte introducing Mary Robinson’s “Likely Lake.”

Most of the introductions are short—most are fewer than three pages—and each author approaches his or her selection differently. Ben Marcus, prefacing “Several Garlic Tales,” tells us that, “Donald Barthelme was a magician of language, and it would be most respectful, perhaps even ethical, not to look too closely into the workings of his magic.” Marcus proposes a few approaches to find meaning in Barthelme’s surreal tale, but never over-explicates. In contrast, Lydia Davis’s surprisingly long intro to Jane Bowles’s “Emmy Moore’s Journal” is a sentence-to-paragraph close reading; Davis interrogates Bowles’s diction and syntax and concludes her little essay by situating Bowles’s (underappreciated) place in the canon. Davis’s insights are compelling, but one wonders if they wouldn’t be better appreciated after reading the story.

Davis also appears as author of one of the selected stories—Ali Smith picks Davis’s excellent number “Ten Stories from Flaubert.” Smith’s intro is wonderful, explaining the genesis of “Ten Stories,” which “came about when Davis (who is also a translator) was working on a a new translation of Madame Bovary and reading through Flaubert’s letters to his friend and lover Louise Colet.” I’m a huge fan of Lydia Davis, whose work defies easy definition. Smith wonders about her selection: “Are they translations? Are they by Flaubert? Are they by Davis?” The questions are better than answers.

Occasionally an author veers close to spoiling the story he introduces, as does Jeffrey Eugenides when he gracelessly steps all over Denis Johnson’s already-much-anthologized classic “Car Crash While Hitch Hiking.” Elsewhere, Jonathan Lethem mashes and minces misplaced metaphors in his confusing and forgettable introduction to Thomas Glynn’s story “Except for the Sickness I’m Quite Healthy Now. You Can Believe That.” Lethem’s sloppy, unrestrained attempt to dazzle is regrettable. He’s like the warm-up act that tries too hard to show up the headliner and winds up falling on his face.

For the most part though, the introductions simply allow readers new ways to see a story they’ve perhaps read before, as in Aleksandar Hemon’s preface to Jorge Luis Borges’s “Funes the Memorious” or David Means’s preface to Raymond Carver’s “Why Don’t You Dance.” Means suggests that “A great story is like an itch that has to be scratched eternally . . . We’re left with more questions than answers, and more answers than questions; therefore, the paradoxical quality of a good story is that it seems to give us everything we need and yet not quite enough to fulfill a sense of having been shown a full life.” Surprisingly good is Dave Eggers’s intro to James Salter’s “Bangkok,” which reads almost like a loose riff of notes that a harried but talented adjunct might bring to his Creative Writing 101 workshop. Eggers showcases keen intuition about Salter’s narrative coupled with an eagerness that makes one want to read the story.

And what about those stories? If I’ve focused more on the introductions than the stories themselves, it’s perhaps because I’ve taken for granted that the selections are solid for an anthology. Sure, any reader might have his or her gripes, but the range of talent here is undeniable, and the spectrum of stories is satisfying. Object Lessons would make a fine addition to the syllabus of any beginning writing course, and any young person interested in honing her craft could do worse than attending the examples collected here. To be clear, Object Lessons is in no way some master course in How to Write a Short Story, but it does provide the most valuable writer’s tool—good reading.

3 thoughts on “I Review Object Lessons, Where 20 Contemporary Authors Select and Introduce 20 Short Stories from The Paris Review”