So somehow in September, I neglected to write a single book review—not even a riff!—on this blog. Mea culpa, mea culpa. This oversight (not really an oversight) I mayhap blame on the nascent Fall semester. Or perhaps I should pin it on a certain fatigue after working my way through Pynchon’s mammoth beast Against the Day and Bernhard’s caustic Gargoyles at the end of the summer. But I shouldn’t blame the Thomases. No, I’ve been reading too much at once again. Bad habit.

So, what have I been reading?

Thomas Bernhard’s early novel Frost (on my Kindle, in the dark, often not exactly sober). I posted an excerpt of Ben Marcus’s review of the novel earlier, which I think does a nice job of describing Bernhard’s project. I’m really close to the end, but the novel wears me down—I experienced a similar feeling when I doubled up Correction and The Loser—I should’ve taken a break I think. Still, an excellent, funny read.

Donald Barthelme’s Sixty Stories: I don’t know why anyone wouldn’t own this book. There are a lot of negatives in that sentence; let me reword: Sixty Stories is perfect, a trove, a performance of an author doing stuff that no other author can do. I think I read most of this in college and just sort of went “check” next to it and moved on and I’m certain I didn’t get what he was doing like I do now—just amazing stuff.

I’ve already posted a few excerpts from the latest collection of Susan Sontag’s journals and notebooks, As Consciousness Is Harnessed to Flesh. I like this collection more than the last one—there’s almost a curatorial aspect to Sontag, who is perhaps in her intellectual prime near the end of the journals—or, maybe prime is not the right word; rather, it’s like her mind (which we get to access in some sense via her entries) is so finely attuned (and at times perfectly out of tune) with the intellectual milieu of the day. I’ll be posting a full review sometime in the next two weeks.

S.D. Chrostowska’s novel Permission, new from Dalkey Archive, is lovely stuff—and again, it’ll get its own proper review on here once I can muster the strength. Chrostowska does all sorts of things here that shouldn’t work—cite directly from Blanchot, Derrida, et al—but it does work. The novel is Sebaldian, soaked in history and literature, a book about books, writing about writing. Full review forthcoming. Short review: It’s very very good.

I picked up Tom Clark’s Fractured Karma two weeks ago somewhat randomly. My local bookshop had reorganized some shelves, putting all the Black Sparrow titles together. Fractured Karma must have been on top, because I don’t see how else I would’ve picked up a book with the word “karma” in the title. The book opened to this page:

That’s all there is on that page, and something about it—the form, the phrasing—cracked me up. It’s part of a long poem called “He was born blind” about the British comedy actor George Formby. The poem is amazing: I read it there in the store. It reminded me immediately of David Markson’s notecard novels—something about how Clark includes so much reality into his poem. But there’s also this perceptive (if oblique) sense of humor behind it all. I ended up devouring the book, reading the whole thing that weekend. It was one of those holy shit reading moments, frankly. Once I finish typing this I’m going to go pick my kids up and we’re going to go to the bookstore and I’m going to get another Tom Clark book and read it this weekend.

Here’s his poem about The Purple One: 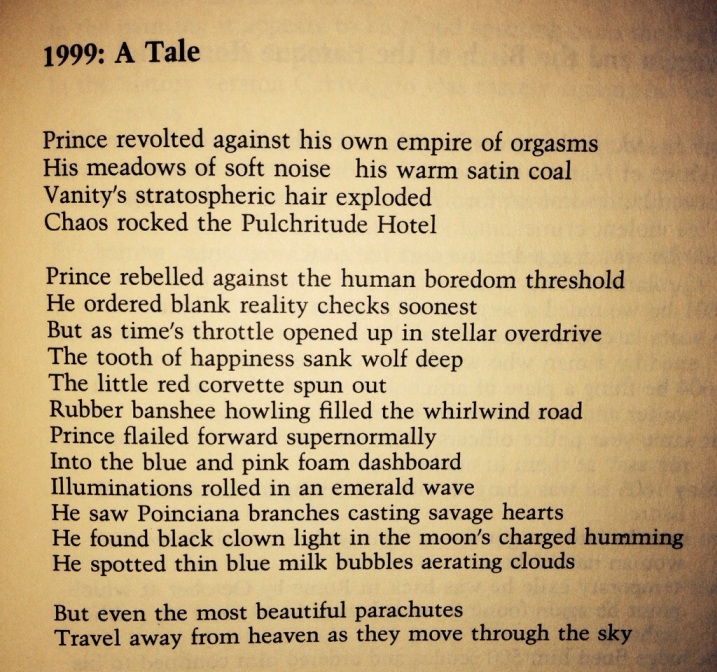