I reread William Gaddis’s 1975 novel J R this February and, as is usually the case with a reread, I was pleasantly unsurprised by all its unremembered surprises—the jokes and japes, riffs and routines that had oozed from my brain-sieve since that first read back in 2012.

How could I forget about a scheme to freeze sound, or an art theft subplot, or the Indian uprising? How could I forget that in J R, Gaddis anagrammatically parodies the critical rejections of his first novel The Recognitions? (I did remember the stuffed Eskimo).

Only a handful of novels are so perfectly simultaneously comic and tragic. Moby-Dick? Yes. Gravity’s Rainbow? Absolutely. (G R and J R, a duo published two years apart, spiritual twins, massive American novels that maybe America hardly deserves (or, rather: theses novels were/are totally the critique America deserves). I guess maybe what I’m saying is J  R is the Great American Novel to Come (The Recognitions is perhaps overpraised and certainly not Gaddis’s best novel; J R is. The zeitgeist has been caught up to J R, the culture should (will) catch up).

So I already wrote on J R on this blog: A misfire of sorts from halfway through (in which I offer more description of the novel’s plot and form than I intend to here, maybe), and a thing I wrote after finishing it which (this thing I wrote before, I mean) might be better than anything I can muster here, in terms of analysis, of like, theme. I’ll limit myself to, I don’t know, eleven points in this riff, yes? (Why 11? Why not? Why not go to 11? 11 for Chapter 11, for bankruptcy, for the moral artistic intellectual bankruptcy that the novel J R skewers). So, having limited myself to eleven points, and having not gotten to the damn point yet, which is—

J R is so good, y’all. The book is a performance, an opera, an essay on America, a howl, a condemnation, a farce, a romance, a tragedy. When I read it in 2012 I couldn’t believe how prescient it was, a feeling reconfirmed with force four years later. J R diagnoses and describes and ridicules American corporatism, the industrial-military-entertainment-banking-education-etc. -complex. And then it weeps.

But wait—what I wanted to say is J R is so good—so, uh, entertaining. It’s fucking funny. And sweet.

And J R’s not as hard a read as some dudes would have you believe. Sure, it’s composed almost entirely in unattributed dialogue—and that can be tough, to start, but you can learn to hear it very quickly.

It is redeeming (continuously), and I don’t just echo Gass here as some kind of rhetorical flourish—reading J R again was a reminder that the novel posits redemption through Bast’s call to action, to his resolve to, as the failed writer (or stymied writer) Eigen puts it, “go do what [he has] to do” to make real art—or, in our hero Bast’s own terms: “…until a performer hears what I hear and can make other people hear what hears it’s just trash isn’t it…”

And in J R the reader becomes the performer, making the voices, singing the voices, (muttering the voices), navigating all the trash, the entropy—J R is a novel of unraveling, where art trips over commercial trash and literal trash–old ads, betting tickets, stock ticker tape, phone book pages, train tickets, scraps. Is there another American novel so aware of its own textuality, its own metatextuality—I mean one that doesn’t goddamn wink all the time at its readers like so much clever postmodern slop?

Gass again: “[J R] is written in speech scraps, confetti-like wiggles of brightly colored cliché. As a medium, it would appear to be as unpromising as might be imagined. And the reader has to ride in the parade and organize all that fluttering that’s come down from on high.” High and low.

And all the heroes of J R—Bast and Gibbs and Amy Joubert, but also the titular J R his own goddamn self (and maybe, if we’re feeling charitable examining this novel of capitalism, Eigen)–they’re falling apart and trying to put themselves back together (even their clothes unraveling, their shoes falling apart). Chaos, entropy.

The whole deal is best summed up in an early episode in which Gibbs rants against the modern education system: “Order is simply a thin, perilous condition we try to impose on the basic reality of chaos…”

Or maybe it’s best summed up (not the right phrasal verb—maybe described by the chaos of, but gee-dee that’s clunky) in the scraps Gibbs keeps wadded in his pocket or in his folders, scraps toward something bigger— 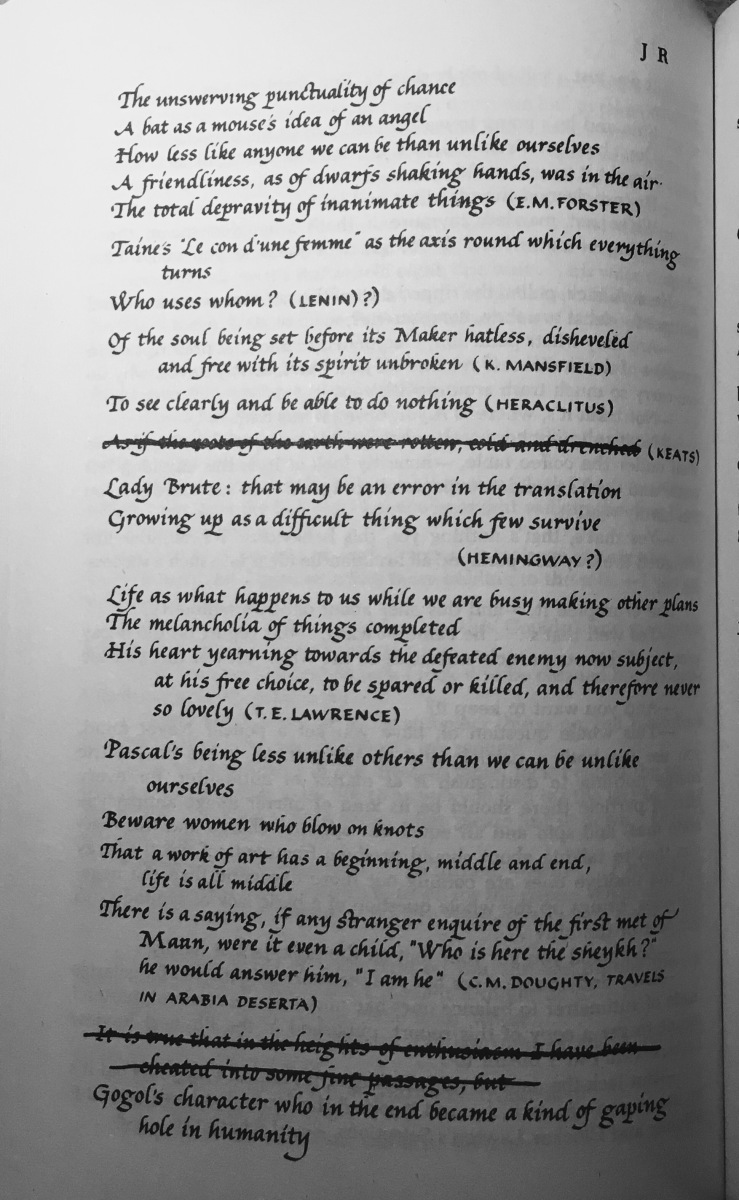 Gibbs’s novel is Agapē Agape, which is also Gaddis’s last novel. And to go back to whatever thrust this riff had re: rereading—J R coheres, perhaps (it doesn’t have to cohere) after a reading of Agapē Agape (which also, Agapē Agape, works to dismantle coherence, or to emphasize the chaos of thought, or to highlight entropy, or to you know what goddamn it pick your own phrase). What I mean to say is I think it’s a good move to read Agapē Agape after J R.

(What I mean to say is that I care and cry for Jack Gibbs, and find in Agapē Agape for him a redemption and resurrection (and dissolution, of course…)).

So I get to point 11 and fail to say so many things I intended to say—about the novel’s sexiness (it’s sexy!)—about its wit (goddamn!)—

—–and here I see/read/hear that I’ve been referring to the novel as its own agency, its own its, as if it were its own beast independent of its master Gaddis—

—-which I guess, like any Great Novel (American or otherwise), it is.

And great, I mean.

And, <enthusiasm> You should read read it! </enthusiasm>.