So, in last week’s engrossing installment our hero photographed and discussed some of the books in this bookshelf: 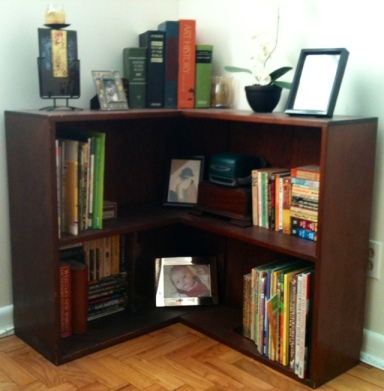 The post optimistically concluded: “So we’ve made it out of my bedroom” — but not so, dear reader, as post-Christmas/New Year cleaning up type activities led to a box of books, still in a storage room in the back of my house, needing to finally be shelved or ejected from the house. Said box:

Most of the volumes herein are aesthetically-challenged/of a certain sentimental value: lots of books from my youth and the youth of my wife; lots of books that taught me how to read, books that weirded me out, books that I hope my kids will want to read in a few years. The corner piece bookshelf had the most (only, really) free space for shelving; it’s also tucked away from public view where an eyesore like my crumbling copy of Vonnegut’s Cat’s Cradle won’t sore eyes:

I actually read Goines’s Swamp Man. It’s not the Deliverance knock off you might expect, although it is singularly horrific. 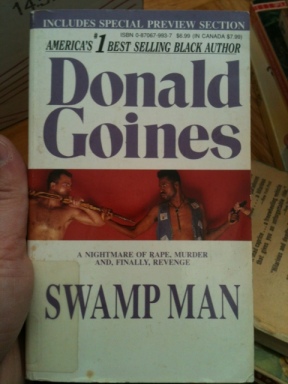 Two books I hated. Hated. I keep them as badges of a strange honor, a sort of “I did it, okay?”:

Melville stories held together with duct tape. This was the copy my 11th grade teacher assigned; I stole it of course. I used it in numerous subsequent courses and the annotations I made are somehow (unduly) precious to me. I can’t part with it even though I have at least two other volumes of Melville stories;

Never sure where to shelve this RAW volume:

Not sure if you can make out the title of this one, but it’s Alcoholic Anonymous’s Big Book. I found it on the beach one night when I was maybe 17 or 18. It’s full of highlighted passages and annotations and I’ve always been intrigued at what led the former owner to cast it away into cattailed dunes, as if the person couldn’t wait to be rid of it but couldn’t bear to bury it in a garbage can. Anyway, I picked it up because I pick up any discarded book, but I’ve kept it because I don’t know why I’ve kept it. Maybe it helped inform my reading of Infinite Jest, I don’t know: 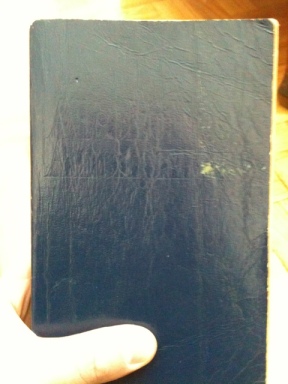 And here’s the “after” shot. I’ll try not to fret over re-shooting shelves again. But moving the box of books yesterday, knowing I was going to do the book shelf post today, I couldn’t help but photograph some of these as I went.

Ed Lynskey’s new novel Lake Charles (new this month from Wildside Press) explores the seamy underbelly of a rural Tennessee community. The book balances traditional crime fiction tropes (fast plotting, hairpin turns, terse dialog, and good old-fashioned violence) with a strong evocation of setting. Lynskey’s novel should make a nice addition to anyone’s summer beach reading schedule. He was kind enough to talk to us over a series of emails about Lake Charles, archetypes vs. stereotypes, violence, and more.

Biblioklept: Your new novel Lake Charles is a crime thriller set in the backwoods of Tennessee in 1979, which you paint as a criminal hotbed riddled with police corruption, a huge marijuana operation, a young lady mysteriously disappeared, and all other sorts of dark intrigue. The setting seems intrinsic to the plot—did the novel originate as an evocation of place, or did the story come first? Or perhaps a mixture of both?

Ed Lynskey: The setting came first. I’ve carried the place inside me since I was a teenager visiting the Great Smoky Mountains in Tennessee. The real Lake Charles is a manmade body of water, not a natural one and that genesis alone corrupts it. The lake had enjoyed a glorious past when it was used for recreation and pleasure, but now the earthen dam is leaky, and the water is scummy, stagnant, and brackish. That’s how I pictured the unsavory setting, and then I molded the criminal elements around Lake Charles. The manmade lake used in James Dickey’s novel Deliverance was in the back of my mind though I’d only seen the film and didn’t read his novel until after Lake Charles got published. Reviewers have cited the native characters as “rednecks” and “hillbillies.” I view those handy labels as a shallow stereotypes. It’s true wild things go on in the boonies. On the other hand, I live in Washington, D.C., and every night on the local news I can see a galore of murders, mayhem, corruption, drug rings, and kidnappings. So the major crimes thrive and seethe everywhere.

B: I’m from the South, and I often find myself feeling offended at certain portrayals of Southerners, which, if done incorrectly, tend to skew to the grotesque. I imagine that a writer never wants to produce a stereotype, but at the same time, certain genres necessitate particular archetypal figures to fulfill reader expectations (not to mention basic plot functions). When crafting a crime noir piece like Lake Charles, do you feel any tension between what is stereotypical and what is archetypal?

EL: The characters in Lake Charles hail from a small mountain town in Tennessee. Though they’re a little rough around the edges and turn violent if pushed enough, I don’t choose to view them as a stereotype. The challenge for the writer, as I see it, is to make the characters familiar enough to the readers but to also keep the characters’ personalities distinct and original. Stereotypes are here to stay. Rick Bragg tells the funny anecdote how his New York City editor wrote in the comment “doublewide what?” on his manuscript. Try hard as they might, they just don’t get it. But getting back to Lake Charles, I wanted a young protagonist, and an older guy who’s a war vet to serve as his mentor because the plot needed that dynamic to be set up. I believe the war vet is probably a flatter character, but the protagonist is coming of age, so I hope he’s a more complex character.

B: I like the relationship between Mr. Kuzawa, the archetypal wise (but gruff) older man, and Brendan Fishback, the protagonist who narrates Lake Charles. Brendan is definitely in over his head, but there’s a certain relief in his having Kuzawa as a mentor. Still, you put Brendan in a lot of trouble. When you were drafting the novel, did you have a clear trajectory for Brendan’s finding a way out of the mess he’s in? Or was it part of your writing process to ensnare your protagonist and see how he might extricate himself?

EL: Lake Charles has gone through numerous revisions, and I don’t recall what my original strategy was for creating Brendan as the protagonist. I knew he was in a heap of trouble, as they like to say down South, but I didn’t think he had the right savvy to find a way out of his sticky jam. If he figured it all out on his own, he’d come off as seeming unbelievable and less credible as the narrator. I’m not sure if Kuzawa is too much of a James Bondian know-it-all who steers Brendan through the wickets. He’s a bit larger-than-life. Sometimes you meet people who seem to suck all the air out of a room with their forceful personality.

B: Switching gears for a moment, Lake Charles isn’t your only novel being published this year, right? Can you tell us a little about your other new books?

EL: You bet. Thank you for asking, too. Quiet Anchorage coming out this spring is a small town cozy mystery featuring two senior amateur sleuths who’re sisters. Their favorite niece is falsely arrested for the murder of her boyfriend, and of course her aunts flew to her defense. I wrote QA to take a break from the noir and hardboiled arena and to have a little fun. The reviews have been generally upbeat and favorable. So, I hope I can publish the second title as a new series next year. The third book, The Zinc Zoo, is the next title in my PI Frank Johnson mystery series. Frank has moved to the suburbs but still manages to get into difficult cases with prickly clients. I’m not sure when TZZ will be out. The publisher has been dealing with a serious family illness since the start of the year. The snazzy front cover art has been finished, so hopefully things will pick up again soon.

B: Three books in a year (plus several novels in the past five or six years)—-that’s fairly prolific. Are you composing these novels simultaneously?

EL: Is it prolific? I never really thought of it that way, but I can see your point, sure. I can’t work on two books at the same time. The plots and characters cross-talk in my brain, and I get things mixed up. I just work steady on one project at a time. I usually woodshed a project for several months before I go back to revise it for presentation. For instance, Lake Charles took me ten years to write from a short story into a published novel. Plus when the economy first went (and still lags) south, I didn’t publish any books for over 18 months. Stuff was just in the pipeline waiting to come out. The erratic schedule makes it more difficult to promote the project because it means I drop whatever I’m working on and shift to do the marketing bit.

B: Clearly you’re having to do some marketing now—but what future projects do you have cooking?

EL: The two large projects looming immediately ahead for me are the second title in the small town cozy mystery series and the large mob novel set in Washington, D.C. But that’s how I envision things today. It’s a fluid situation not because so much is happening as I’m hustling the new projects here and there.

B:  Have you ever stolen a book?
EL: I don’t believe I’ve ever filched a new book from a store. I know there was a book swap in the Bermuda bed & breakfast where you left a book if you took one. I think I traded a baseball book for a mystery. That’s about as close as I can get to that situation.