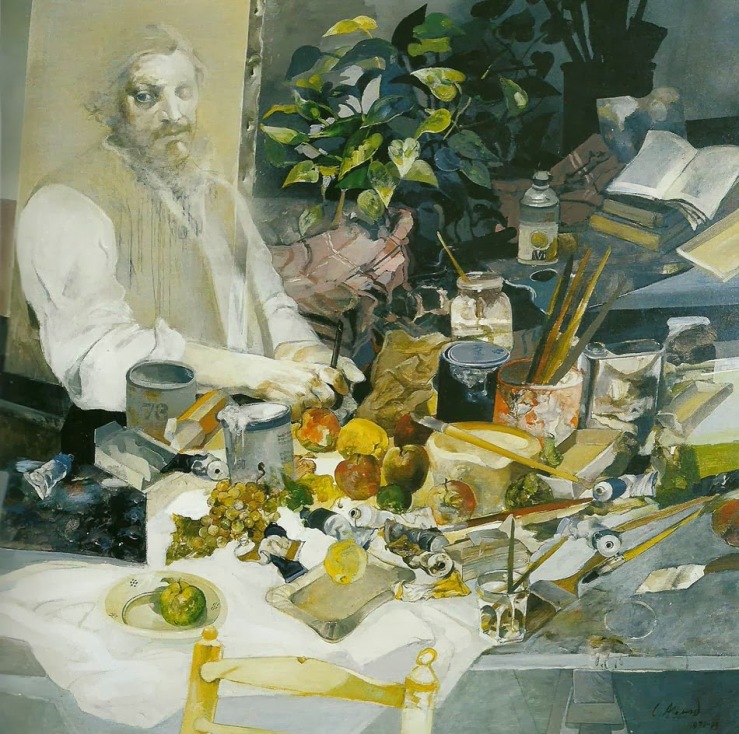 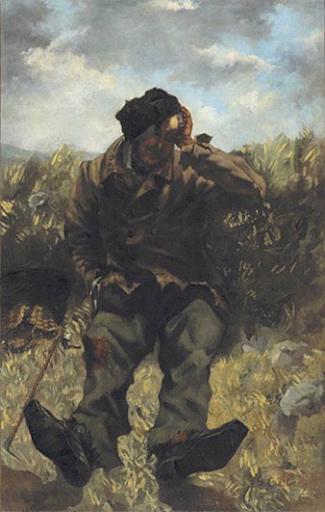 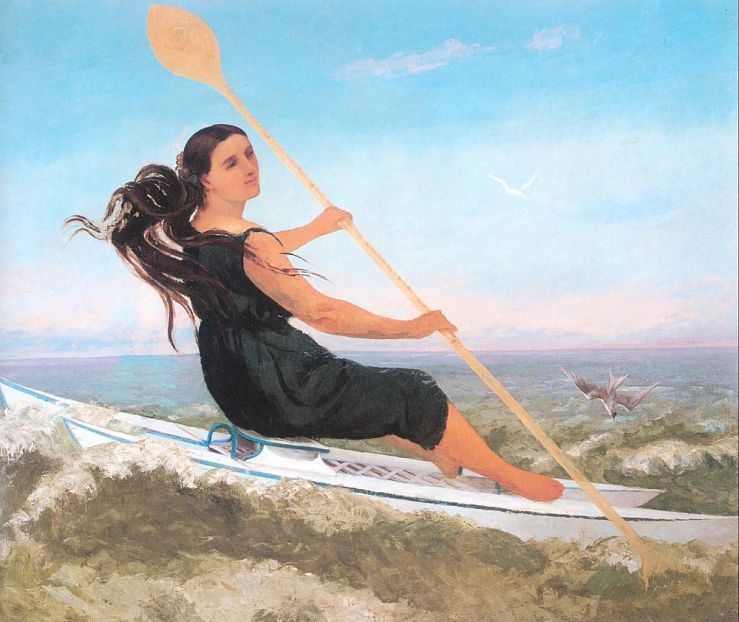 It’s in Ansky’s notebook, long before he sees a painting by the man, that Reiter first reads about the Italian painter Arcimboldo, Giuseppe or Joseph or Josepho or Josephus Arcimboldo or Arcimboldi or Arcimboldus (1527-1593). When I’m sad or bored, writes Ansky, although it’s hard to imagine Ansky bored, busy fleeing twenty-four hours a day, I think about Giuseppe Arcimboldo and the sadness and tedium vanish as if on a spring morning, by a swamp, morning’s imperceptible advance clearing away the mists that rise from the shores, the reed beds. There are also notes on Courbet, whom Ansky considers the paradigm of the revolutionary artist. He mocks, for example, the Manichaean conception that some Soviet painters have of Courbet. He tries to imagine the Courbet painting The Return from the Conference, which depicts a gathering of drunken priests and ecclesiastical dignitaries and was rejected by the official Salon and the Salon des Refuses, which in Ansky’s judgment casts the reject-rejectors into ignominy. The fate of The Return from the Conference strikes him as not only inevitable and poetic but also telling: a rich Catholic buys the painting and no sooner does he get home than he proceeds to burn it.

The ashes of The Return from the Conference float not only over Paris, reads Reiter with tears in his eyes, tears that sting and rouse him, but also over Moscow and Rome and Berlin. Ansky talks about The Artist’s Studio. He talks about the figure of Baudelaire that appears on the edge of the painting, reading, and stands for Poetry. He talks about Courbet’s friendship with Baudelaire, Daumier, Jules Valles. He talks about the friendship of Courbet (the Artist) with Proudhon (the Politician) and likens the sensible opinions of the latter to those of a pheasant. On the subject of art, a politician with power is like a colossal pheasant, able to crush mountains with little hops, whereas a politician without power is only like a village priest, an ordinary-sized pheasant.

In any case, the public office that Courbet held after the fall of Napoleon III made him responsible for the protection of the monuments of Paris, which in view of later events must certainly be taken as a monumental joke. France, however, wasn’t in the mood for jokes and all the artist’s assets were seized. Courbet left for Switzerland, where he died in 1877 at the age of fifty-eight. Then come some lines in Yiddish that Reiter can’t quite decipher. He supposes them to be expressions of pain or bitterness. Then Ansky goes off on a tangent about some Courbet paintings. The one called Bonjour, Monsieur Courbet suggests to him the beginning of a film, one that gets off to a bucolic start and gradually lapses into horror. The Young Ladies on the Banks of the Seine recalls spies or shipwrecked sailors enjoying a brief rest, and Ansky goes on to say: spies from another planet, and also: bodies that wear out more quickly than other bodies, and also: disease, the transmission of disease, and also: the willingness to stand firm, and also: where does one learn to stand firm? in what kind of school or university? And also: factories, desolate streets, brothels, prisons, and also: the Unknown University, and also: meanwhile the Seine flows and flows and flows, and those ghastly faces of whores contain more beauty than the loveliest lady or vision sprung from the brush of Ingres or Delacroix.