From Richie Pope’s Fatherson, issue #13 of Youth in Decline’s monograph series Frontier. It’s so, so good. My review.

END_OF_DOCUMENT_TOKEN_TO_BE_REPLACED 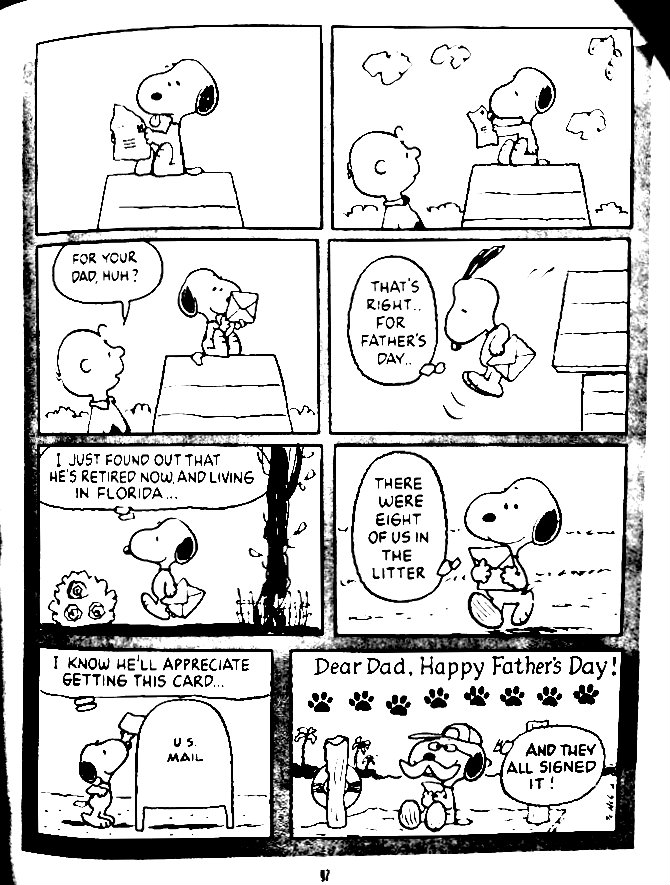 Roberto Bolaño, from an interview with Eliseo Álvarez, republished this month in Melville House’s Roberto Bolaño: The Last Interview:

I suppose that within his brutality and his courage–he is a very courageous man–my father loved me as I love my son. In the end, one could talk for hours about the relationship between a father and a son. The only clear thing is that a father has to be willing to be spat upon by his son as many times as the son wishes to do it. Even still the father will not have paid a tenth of what he owes because the son never asked to be born. If you brought him into this world, the least you can do is put up with whatever insult he wants to offer.

Okay, so sons didn’t ask to be born, but what about daughters? How did Bolaño feel about his daughter?

I won’t say anymore. I’ll start to cry. The only explanation I could give would be to cry. It’s beyond the beyond.

Reading these quotes, I thought about two of my favorite depictions of fathers and children in Bolaño’s work. First, there’s Bolaño as the son, “B,” in the title track from the collection Last Evenings on Earth. The story is a strange mix of sinister and funny, with the (perhaps overly literary) son fearing for his dad, a boxer who, at least in the son-narrator’s view, doesn’t seem to be paying attention to just how bad things seem to be turning on the pair’s vacation to Acapulco. Then there’s (possibly) Bolaño as parent, this time in the form of Oscar Amalfitano in 2666. If Bolaño would cry for his daughter’s safety, for anxiety and wariness of a cruel world, then Amalfitano becomes a literary center for those fears. And, if you’ve read that book, you know his paranoia is justified. In any case, it’s clear that Bolaño loved his children deeply. In another of the the book’s interviews–literally, “The Last Interview,” Bolaño, the exile who lived everywhere said, “my only country is my two children.” He even asked that his masterpiece 2666 be divvied up into five parts in the hopes that it would provide steady income for his son and daughter.