If you listen to NPR, you’re likely familiar with Scott Simon, host of Weekend Edition. In his new memoir Baby We Were Meant for Each Other, Simon shares his own experiences adopting two girls from China, his daughters Elise and Lina. In addition to sharing his own story, Simon highlights moving tales from a dozen other families, including sportswriter Frank Deford and Freakonomics author Steve Levitt. Simon mixes pathos and humor and his detailed, unflinching narrative is deeply emotional without ever coming across as maudlin or mawkish. While an argument for adoption seems to be relatively common sense, Simon reveals that the process is declining in America, largely because of advances in fertility science. He also makes an impassioned case against China’s one-child policy as a human rights crime against women. In a recent profile at Bookpage, Simon said “The Chinese permit an astonishingly small percentage of orphaned and abandoned children to be adopted. To me, that is absolutely flabbergasting. The government policy on adoption is addressing political, economic and social goals that have almost nothing to do with the best interests of children. Now that we have two little girls from China who are part of our family, we need to speak out about it.” At first glance Simon’s memoir will likely resonate mostly with those who’ve experienced adoption first-hand, but a closer look reveals a narrative that taps into an experience that we all share–what it means to part of a family. Baby, We Were Meant for Each Other is new in hardback from Random House. 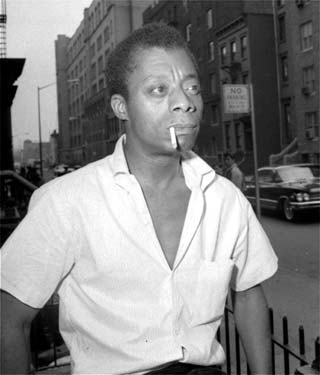 The writer James Baldwin once made a scathing comment about his fellow Americans: “It is astonishing that in a country so devoted to the individual, so many people should be afraid to speak.”

As an openly gay, African-American writer living through the battle for civil rights, Baldwin had reason to be afraid — and yet, he wasn’t. A television interviewer once asked Baldwin to describe the challenges he faced starting his career as “a black, impoverished homosexual,” to which Baldwin laughed and replied: “I thought I’d hit the jackpot.”

The greatest poet in the English language found his poetry where poetry is found: in the lives of the people. He could have done this only through love — by knowing, which is not the same thing as understanding, that whatever was happening to anyone was happening to him. It is said that his time was easier than ours, but I doubt it — no time can be easy if one is living through it. I think it is simply that he walked his streets and saw them, and tried not to lie about what he saw: his public streets and his private streets, which are always so mysteriously and inexorably connected; but he trusted that connection. And, though I, and many of us, have bitterly bewailed (and will again) the lot of an American writer — to be part of a people who have ears to hear and hear not, who have eyes to see and see not — I am sure that Shakespeare did the same. Only, he saw, as I think we must, that the people who produce the poet are not responsible to him: he is responsible to them.