I don’t like August and I’m glad it’s over.

I only wrote a few riffs and reviews in August, failing to write at length about Gordon Lish’s Cess and Victor Hussenot’s The Spectators and Vladimir Nabokov’s Pale Fire. Also: Neal Stephenson’s novel The Diamond Age, which I audited the audiobook of—great stuff, a novel that posits the book as a primary and insuperable technology. And some films too—Michael Mann’s Thief (amazing); Quest for Fire (why were the Baby Boomers so obsessed with cave people?); Ex Machina (a well-acted design-porn riff on Bluebeard that has no real ideas about its central theme, human consciousness).

I also watched and loved and didn’t write about the second season finale of True Detective—loved it—a tragic hyperbole, a big exclamation point, a sympathetic punchline to the season’s paternal anxieties. I found the final shot unexpectedly moving—the season’s female leads moving through the traffic of humanity, strapped with a child, knives, the future.

I riffed on season 2 of True Detective, arguing for its merits as a neon noir satire.

Ryan Chang and I talked about New American Stories, an anthology edited by Ben Marcus. We riffed on the selections, scope, and the first story, Saïd Sayrafiezadeh’s “Paranoia.”

I wrote a barely-coherent, probably incoherent review of Philip K. Dick’s novel Martian Time-Slip. The sub(or is it super?)text of the review is that I am a Permanently Paranoid American.

I also wound up writing a bit on Paul Kirchner’s trip strip The Bus yesterday. For years now, I’ve run some kind of regular Sunday post to anchor the site—it was death masks for a while, book shelves after…maybe something else I’m forgetting now (?)—but running The Bus was the most fun I had.

I’m not sure what I’ll run this Sunday for a new series, but something serialish so… 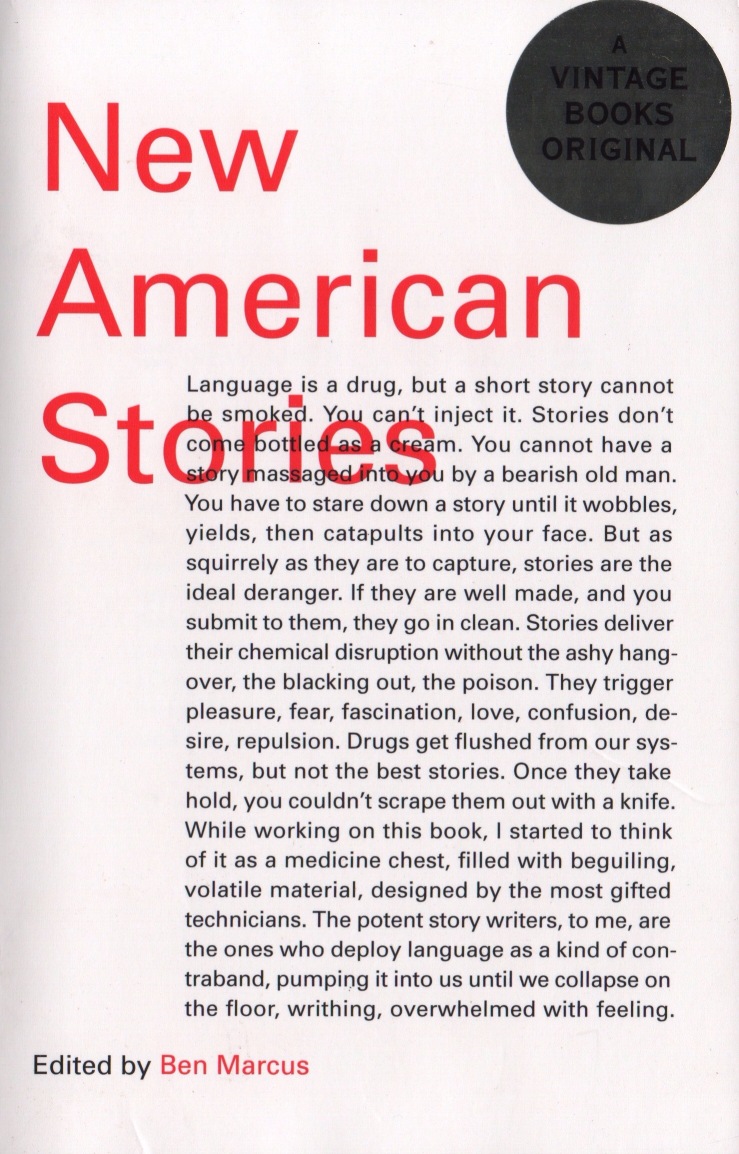 Over the next few weeks, Biblioklept contributor Ryan Chang and I will be discussing New American Stories, an anthology edited—or maybe “curated” is the right word, although I’m not sure—by Ben Marcus.

Edwin Turner: You got your copy of New American Stories? Let’s talk about the cover, the intro, and the first story,  Saïd Sayrafiezadeh’s “Paranoia.”

Ryan Chang: The cover and the introduction, and hence the context of the selections, elegantly mesh, which is more than I can say for 99% of covers. But I like anything that Mendelsund touches. It’s quiet, understated, but an excellent visual metaphor for what Marcus discusses in his introduction. The best part about this cover is the spot where part of the word “Stories” tries to mingle with the blocked passage from the introduction. The two don’t merely coexist, or mesh at all, but exist in this static conflict. It seems to be what Marcus wants most out of this new anthology; it occurs to me that I don’t have a lot of anthologies because a) I find them pretty boring, b) if it’s going to be an anthology, it’s going to be non-Anglo and -American — most of the time, the anthologies featuring these authors are already on my shelf in one way or another, and when I flip through them in the book store, the new context in which I find an author (say, someone like Richard Yates and Barry Hannah) isn’t new and exciting.

ET: The cover is great—spine too. I agree with you that it’s “quiet”—although that’s a strange word, y’know, considering there’s so much going on there—so much text. But the book is handsome, and the cover presents as a baseline postmodern conundrum—Where does the text begin? The authorship question is there too, on the second page, the “Also by Ben Marcus” page—as if Marcus were the author of the collection. Which in a way he kinda sorta is—the whole mixtape/DJ/curator thing—I mean he’s the author of the “anthology,” the tracklist, the occasion. I’m generally suspicious of the overuse of the term “curator,” but I think it’s ultimately more apt than editor. And Marcus spins a cool set. The book is a tasty gateway drug.

Anthologies were really important to me when I was 15, 16, 23…but now I tend to think of them entirely in teaching terms, often in very jaded terms, honestly. I would love to be able to look over the selections here with fresher eyes, if you know what I mean. As a freshman in college, I read the 1994 anthology The Vintage Book of Contemporary Short Stories, which Tobias Wolff edited. It would be impossible for me to overestimate the importance of that for me—it introduced me to Barry Hannah, Denis Johnson, Ann Beattie, Raymond Carver, and all these other writers who simply weren’t on my radar. In retrospect, I realize that that anthology represented a very particular kind of writing, but I think Wolff captured something of an era there.

RC: The posture of most anthologies is to celebrate/represent the coalesced spirit of a kind of writing, or an era. And I only realized this reading through Marcus’s introduction. He writes, “This anthology aims to present … a sampler of behaviors and feelings we can very nearly have only through reading. A sourcebook of compulsory emotions.” I really like this. The focus of NAS is on language — as is to be expected in Marcus’s hands — and not on, say, a particular identity, era, or whatever. This is an anthology about the breadth of styles and forms — which brings me back to the cover. It’s a really brilliant illustration of Marcus’s guiding aesthetic principle in his own work and here: the productive tension between form and content. The scope of selection is wide, and encouraging from someone known to run in “experimental circles.” This is an anthology about aesthetic modes, not being an American.

ET: Parts of Marcus’s introduction feel a little like a wide-eyed sermon for the choir to me, but maybe I’m being cynical. Maybe I want him to be cynical with me. We all know why we’re here; get to the stories. His riffs on language and what and why we (might) use language offer an adequate “defense” of the title/mission New Stories—but there’s not really an engagement with the American aspect there, which, I suppose, might have played into a deeply ideological thing, a statement thing. Maybe A Sourcebook of Compulsory Emotions is a much much better title. But—but! But that first story, Saïd Sayrafiezadeh’s “Paranoia”—that’s a very American story, or, rather, that’s a story about America: nationalism, capitalism, racism, militarism, football, a Fourth of July scene? Oh, and, paranoia.

RC: The first story is a great opener, I think. It’s a classic realist mode, which, after reading the introduction, will get the reader to think, “Will something weird happen?” The weirdness that happens is the “moral honesty” that Marcus talks about in the introduction: the weirdness is in how normal this story is. I say classic and realist and I mean that the plot is straightforward, its language is plain and mostly functional (that is, free of any acoustical poetic attention or syntactical destruction), and about, quote-unquote, real people. Here’s the weird, and it’s not even that weird: the small talk we take for granted — i.e., when we ask the other person how they’re doing; in “Paranoia,” it’s the weather — becomes this refrain for each section in the story; Sayrafiezadeh deftly shows that repetition — i.e. stability — gives only the illusion of comfort, and that comfort in almost-knowing the weather is a salve against the American reality: that the worst will always happen. I won’t give the story away for anyone reading this post, but “Paranoia” works on two really brilliant moves. They’re pretty obvious maneuvers, but I think it shows that even in a more straightforward form, if one hones in on the tension between form and content — that is, diction/syntax and images the former evokes — some affecting writing is bound to occur. The other way — a commitment to a particular position — political, moral or otherwise — comes off cheap and stale.

ET: “Paranoia” asks its reader to attend closely to diction: “That word’s not called for!” is a through-line in the story. I almost wrote tale for story there (attending to diction), but “Paranoia” is not a tale. There’s no neat bow at the end. It succeeds on vibe, on mood, on the evocation of menace its title promises.

RC: Yeah, you’re right — it demands that the reader divert their attention away from the televised bombings of “the peninsula,” and on the subversive, subdermal ways in which language organizes reality — exactly how Marcus describes language in his introduction.

ET: So…let’s read the last story together next, no? Then, you pick one that’s a reread for you, but not for me, and we’ll read it—and then I’ll do the same—pick a reread for me that you haven’t read? Good?