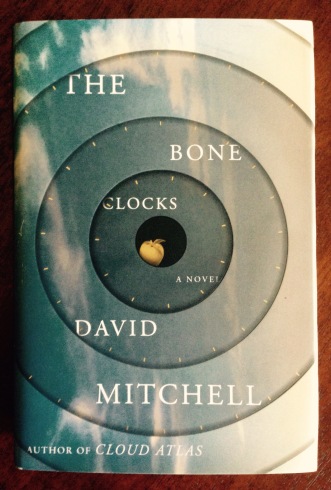 David Mitchell’s latest novel The Bone Clocks is 624 pages in hardback, its sprawling metaphysical plot jammed into six overlapping sections that move through six decades and several genres. Any number of critical placeholders might be applied here: Sweeping, ambitious, genre-skewering, kaleidoscopic (I stole that last one from the book jacket). Or, perhaps we prefer our descriptors more academic? Okay: Postmodern, metatextual, metacritical, polyglossic. With The Bone Clocks, Mitchell has used these functional, formal postmodernist techniques to string together a few good novellas with some not-so-good novellas into a novel that’s not bad—but also not particularly good.The Bone Clocks is just okay. It fills space, it fills time. But unlike Mitchell’s previous stronger novels—Black Swan Green and Cloud Atlas in particular—The Bone Clocks fills without nourishing.

The Bone Clocks opens in 1984 with “A Hot Spell,” introducing us to the novel’s ostensible subject, Holly Sykes, a fifteen year-old who runs away from home. This section also introduces us to Mitchell’s consistent idiom here, a first-person present tense narration that forces the plot forward like an engine. When Mitchell needs to deliver any background information, the narrator simply trots out old memories, or a character politely shows up to dump exposition. The exposition-dumping is particularly egregious in the novel’s final sections.

Our heroine Holly Sykes helps out with some of that exposition early on, filling in some of the contours we’ll need to understand if we want to suss out the Big Metaphysical Plot of The Bone Clocks: There are “the radio people,” voices that contact Holly, um, telepathically; there are the strange figures of Marinus and Constantin; there is the drama of Holly’s deep-souled, old-souled little brother Jacko, who ominously makes her memorize a labyrinthine map in the book’s early pages (foreshadowing!):

The one Jacko’s drawn’s actually dead simple by his standards, made of eight or nine circles inside each other.

“It doesn’t look all that bad to me.”

“Why’s your maze so satanic, then?”

“The Dusk follows you as you go through it. If it touches you, you cease to exist, so one wrong turn down a dead end, that’s the end of you. That’s why you have to learn the labyrinth by heart.”

Christ, I don’t half have a freaky little brother.

“Right. Well, thanks, Jacko. Look, I’ve got a few things to—” Jacko holds my wrist. “Learn this labyrinth, Holly. Indulge your freaky little brother. Please.” That jolts me a bit.

See how young Holly doesn’t quite cotton that Jacko has, like, responded to her by using the same phrase she thought but didn’t say aloud? Mitchell has a talent for crafting characters like this—characters who can’t see their own blind spots, characters utterly naïve to how we see them. Mitchell excelled at this technique in Black Swan Green, whose narrator Jason Taylor describes for us what he cannot name or fully understand. Holly’s 1984 narrative often feels like a rewrite of Black Swan Green. Jason actually shows up—sort of—in The Bone Clocks; his cousin Hugo Lamb, a minor character in Black Swan Green, narrates the section after young Holly’s story.

Hugo Lamb’s “Myrrh Is Mine, Its Bitter Perfume” propels us to 1991. Lamb is a charming, conniving con man. If young Holly echoes Adam Ewing of Mitchell’s superior novel Cloud Atlas in her naïve innocence (she does), then Hugo Lamb echoes Cloud Atlas’s genius con man, Robert Frobisher. Indeed, most of the central narrators in The Bone Clocks read like familiar repetitions of characters from Cloud Atlas. I enjoyed Frobisher’s plotting and scheming, and I enjoyed it again in Lamb, a sympathetic rake. I was digging The Bone Clocks all through his section, despite feeling vaguely worried that Mitchell was not exactly doing much to flesh out The Big Metaphysical Plot that would have to hold this thing together.

END_OF_DOCUMENT_TOKEN_TO_BE_REPLACED

David Mitchell’s new novel The Bone Clocks showed up at Biblioklept World Headquarters earlier this week, but I’ve been busy with the start of the Fall semester and haven’t had a chance to get into it yet. Here’s publisher Random House’s blurb:

Following a terrible fight with her mother over her boyfriend, fifteen-year-old Holly Sykes slams the door on her family and her old life. But Holly is no typical teenage runaway: A sensitive child once contacted by voices she knew only as “the radio people,” Holly is a lightning rod for psychic phenomena. Now, as she wanders deeper into the English countryside, visions and coincidences reorder her reality until they assume the aura of a nightmare brought to life.

For Holly has caught the attention of a cabal of dangerous mystics—and their enemies. But her lost weekend is merely the prelude to a shocking disappearance that leaves her family irrevocably scarred. This unsolved mystery will echo through every decade of Holly’s life, affecting all the people Holly loves—even the ones who are not yet born.

A Cambridge scholarship boy grooming himself for wealth and influence, a conflicted father who feels alive only while reporting on the war in Iraq, a middle-aged writer mourning his exile from the bestseller list—all have a part to play in this surreal, invisible war on the margins of our world. From the medieval Swiss Alps to the nineteenth-century Australian bush, from a hotel in Shanghai to a Manhattan townhouse in the near future, their stories come together in moments of everyday grace and extraordinary wonder.

Rich with character and realms of possibility, The Bone Clocks is a kaleidoscopic novel that begs to be taken apart and put back together by a writer The Washington Post calls “the novelist who’s been showing us the future of fiction.”

An elegant conjurer of interconnected tales, a genre-bending daredevil, and a master prose stylist, David Mitchell has become one of the leading literary voices of his generation. His hypnotic new novel, The Bone Clocks, crackles with invention and wit and sheer storytelling pleasure—it is fiction at its most spellbinding.