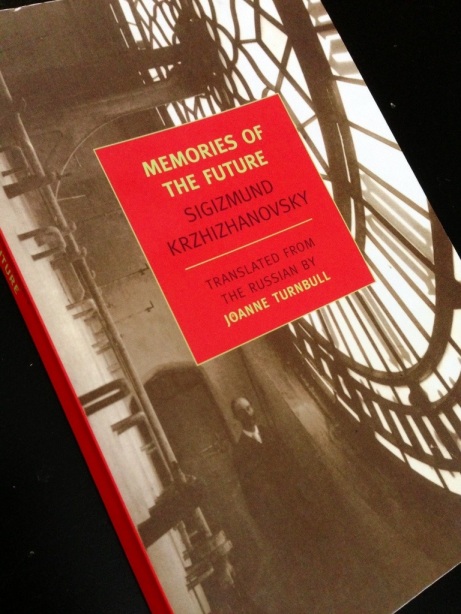 Let me get to what I was getting at:

Sigizmund Krzhizhanovsky: Russian, 1887-1950: His collection Memories of the Future: Seven stories in spirited translation by Joanne Turnbull: Available in English from the good folks at NYRB: It’s the sort of book that deserves its own book. Etc.

In lieu of writing that book, quite beyond my power, I’ll compare Sigizmund Krzhizhanovsky to some other writers in the hope of piquing your interest in this neglected master.

You knew I would start here.

Four years senior to Krzhizhanovsky, Mr. Kafka of Prague was our Russian writer’s contemporary (if we want to use our postmodern imaginations). I was tempted to simply type “K” for Kafka, but they are both K. Kafkaesque is invoked frequently enough to potentially sap the adjective’s potency, but consider that the same nebulous yet very real forces that shaped (warped?) Kafka (which, in turn Kafka shaped (warped) in his own writing) shaped (warped?) Krzhizhanovsky. Unseen, displaced authority, alienation, and absurdity, yes, but also humor, the line of hysteria, the constraining order that induces madness. The nightmare of modernity.

“Speaking in more modern terms,” the fine print went on, “our nightmares, weighing as they do on the brain, gradually form a sort of moral ceiling that is always about to come crashing down on one’s head: some of our customer’s call this ‘world history.’ But that’s not the point. The point is the durability, unwakeability, high depressiveness, and wide availability of our nightmares: mass-market products good for all eras and classes, nighttime and daytime, moonlight and sunlight, closed eyes and open.”

If Kafka was Krzhizhanovsky’s psychical contemporary, Mikhail Bulgakov (Russian, b. 1891) is his geographic one. Both men were writing through (and to some extent, against) the Russian Revolution, rendering the crowded buzz of new Moscow in manic strokes. Humming under the surface of Bulgakov’s masterpiece The Master and Margarita is the threat of disappearance, the loss of personal space, but also absurd humor. These themes run through the seven stories collected in Memories of the Future, but perhaps evince most strongly in “Quadraturin” (maybe Krzhizhanovsky’s most famous story), where furtive bachelor Sutulin obtains a samizdat device that expands his tiny apartment—ad infinitum into limitless space and terror.

In their sleep and in their fear, the occupants of the quadratures adjacent to citizen Sutulin’s eighty-six square feet couldn’t make head or tail of the timbre and intonation of the cry that woke them in teh middle of the night and compelled them to rush to the threshold of the Sutulin cell: for a man who is lost and dying in the wilderness to cry out is both futile and belated: but if even so—against all sense—he does cry out, then, most likely, thus.

So much of Kafkaesque applies to Borgesian, and perhaps I’ve quickly run up against one of the central problems of comparison: The originary: The source of the source: Primary (etc.). No matter. Krzhizhanovsky’s modernism is Borgesian: Tale-telling: nested tales, circular tales, winding tales, labyrinths and mirrors, trap doors and hidden texts (motives), narrators who tell us a story as if it’s just a distraction in the middle of some bigger story we won’t get to hear—yet. Could there be a more Borgesian title than “The Bookmark,” a tale loaded with hundreds of tales. (Okay, maybe not hundreds, but still loaded with that Scheherazade programming, that infinite looping…).

From “Someone Else’s Theme”:

And an invented person makes the greatest impression, naturally, on the seemingly not-invented, real person who, upon finding his reflection in a book, feels replaced and redoubled. This person cannot forgive his feeling of double insult: here I, a real, not-invented person, shall go to my grave and nothingness in ten or twenty years, whereas this fabricated, not-real “almost I” shall go on living and living as though it were the most natural thing in the world; more unforgivable still is the awareness that someone, some author, made you up like an arithmetic problem, what’s more he figured you out, arrived at an answer over which you struggled your entire life in vain, he divined your existence without ever having met you, he penned his way into your innermost thoughts, which you tried so hard to hide from yourself. One must refute the author and vindicate oneself. At once!

It might be easy to go to Poe for a comparison: He’s famous for his tales, and Krzhizhanovsky is a tale-master—whereas Hawthorne’s estimable short stories are often overlooked because he happened to write what may or may not be The Great American Novel. But Hawthorne’s dark romantic imagination, his weird sci-fi streak, and his wry sense of humor offer a better frame of reference for Krzhizhanovsky’s contours. Krzhizhanovsky is also fond of Hawthorne’s closing gambit, the “It-was-all-a-dream-or-hey-was-it?” maneuver. Both writers practice allegorical destabilization in their deeply darkly ironic parables. Soul detectives.

He knew from experience that dreams, like the thieves in the parable, come unseen, they slip under foreheads, trying to avoid the eyes, and only there—under the cranial roof, safe and sound, sprawled the brain—do they throw off their invisibility.

Krzhizhanovsky directly invokes several Russian writers by name, including Gogol and Turgenev, but Fyodor Dostoevsky seems to pop up the most. This makes sense. Dostoevsky is Krzhizhanovsky’s parent-writer. Or maybe Raskolnikov is. Or maybe the Underground Man is. Like Dostoevsky, Krzhizhanovsky crafts alienated loners and thrusts them into absurd moral quandaries.

Resignation to one’s fate takes practice. Like any art. Or so citizen Shushashin maintains. He begins every day—after putting on his shoes and washing his face, before throwing on his jacket—with an exercise. Again, the expression is his. This expression works like this: he walks over to the wall, puts his back up against it and stands there in an attitude of utter resignation. For a minute or two. And that’s all. The exercise is over. He can begin to live.

Flann O’Brien’s The Third Policeman channels Crime and Punishment via the dream machines of Hawthorne, Wells, Verne et al—all elements we might find in Memories of the Future. And of course O’Brien is Kafkaesque, Borgesian, etc. The stories-within-stories, the fake philosophers, the hefty strawmen, the dreams, the nightmares…Must I draw this out?

‘I remember I tossed all night, my elbows bumping against the hard theme that layers our entire life. My pen, as soon as I dipped it in ink, wrote Animal Disputans. That was the title. Next came…Perhaps this doesn’t interest you?’

‘I took the title and the first verses of my song, if you will, from an old and long-forgotten book by the Danish humorist Holberg. This book—Nicolai Klimmi Her subterraneum, I believe it’s called—describes the fantastic adventures of a traveler who winds up, I can’t remember how, inside the Earth. The traveler is astonished to find that inside the planet, as inside a hermetically sealed vessel, lives a race with its own hermetically sealed State system, way of life, culture, everything that is customary in such cases. Over time the life of these undergroundlings—once rife with wars and conflict, cut off, hidden away beneath miles of crust—sorted itself out and settled into a harmonious routine. The problems of the hermetically sealed were all solved, everything ironed out and agreed upon. But in memory of those long-ago wars, Nicolai Klimmi tells us—no, please listen, it’s rather touching—the land’s noblest and richest magnates raised animal disputans. There isn’t anything to argue about in an isolated country where everything has been determined and predetermined in saecula saculorum but these disputants were trained for the purpose, fed a special diet that irritated the liver and sublingual nerve, then pitted against one another and forced to argue till they were hoarse and foaming at the mouth—to unanimous laughter and merry halloos from the lovers of old traditions…

I think we can all agree that Memories of the Future could be the title of a Philip K. Dick story, right? The story of the same title (the longest in the collection, a novella, really) strongly recalls Dick, channeling him through time travel, and Phildickian themes course throughout the book: Paranoia, identity crisis, cynicism, the realization that the waking life might conceal alternative consciousness…

Haven’t we managed to unify dreams? Haven’t we hoodwinked humanity with that sweet million-brain dream of brotherhood, a united dream about unity? Flags the color of poppy petals flutter above the crowds. Reality is fighting back. But its blazing suns don’t frighten the newly ascendant underground. Sleepers’ eyes are shielded by eyelids. Yesterday’s utopia has become today’s science. We’ll break the backs of facts. We’ll rout their status quos: you’ll see those status quos turn tail and run. If an ‘I’ should rise up against our ‘we’, we’ll hurl him down a well of nightmares headfirst. We’ll hide the sun behind black blots, we’ll plunge the whole world into a deep, static slumber. We’ll even put the idea of waking to sleep, and if it resists, we’ll gouge out its eyes.

While reading Memories of the Future, I sometimes pretended that Krzhizhanovsky (and his doppelganger writer-protagonists) were versions of Boris Abramovich Ansky, the dissident Russian writer who appears (via diaries and fragments) in “The Part About Archimboldi” in Roberto Bolaño’s 2666. Sure, I brought some of that metatextual layering with me, but Krzhizhanovsky’s Borgesian stories repeatedly destabilize the notion of an authoritative narrator or storyteller, like matryoshka dolls that open into eggs that open into dreams and nightmares. Like Bolaño’s work, Krzhizhanovsky’s writing skates across an abyss of horror. The Krzhizhanovskian milieu shares psychic space with the Bolañoverse—in particular, both writers seem to love to walk their characters through graveyards.

From “The Thirteenth Category of Reason”:

That’s how it always is: first you call on your friends, and then—when the hearses have delivered them—on their graves. Now my turn too has come to exchange people for graves. The cemetery where I go more and more often lies behind high crenelated walls and looks from the outside like a fortress: only when the fighters have all fallen will the gates open. You walk in—first past a chaos of crosses, then past the inner wall—to the new crossless cemetery: gone are the monumental statics of the old human sepulchers, the massive family vaults and stone angels with their penguin-like wings grazing the earth: red metal starts on thin wire stems fidget nervously in the wind.

By way of conclusion, I’ll submit that Krzhizhanovsky is just as notable for his divergences from the writers I’ve listed above as he is for any similarities. There are also plenty of names that could be added to the list above, and readers of Krzhizhanovsky will likely protest that I’ve failed to underscore the political underpinnings of his writing (for the record, the seven stories in Memories of the Future clearly respond to (and in many ways protest and satirize) early Soviet politics and lifestyle, but Krzhizhanovsky’s approach is coded, oblique, and in this sense, timeless).

I’ll end with with another citation from “The Thirteenth Category of Reason,” a story that plays with Kant’s twelve categories of conception. Krzhizhanovsky’s work is always dialogic; he’s always performing voices, but occasionally one slips through that I take to be a more direct version of the author’s own. Here, Krzhizhanovsky offers a possible thesis statement for his project—his desire to write outside the confines of reason, his desire to find meaning in “all our figments and alogisms”:

For you see, all those who are off (I won’t look for another definition) or, rather, out of their heads, evicted, so to speak, from all twelve Kantian categories of reason, must naturally seek refuge in a thirteenth category, a sort of logical lean-to slouched against objective obligatory thinking. Given that the thirteenth category of reason is where we entertain, in essence, all our figments and alogisms, the old gravedigger may be useful to my projected cycle of “fantastic” stories.

That projected cycle of fantastic stories is Memories of the Future.