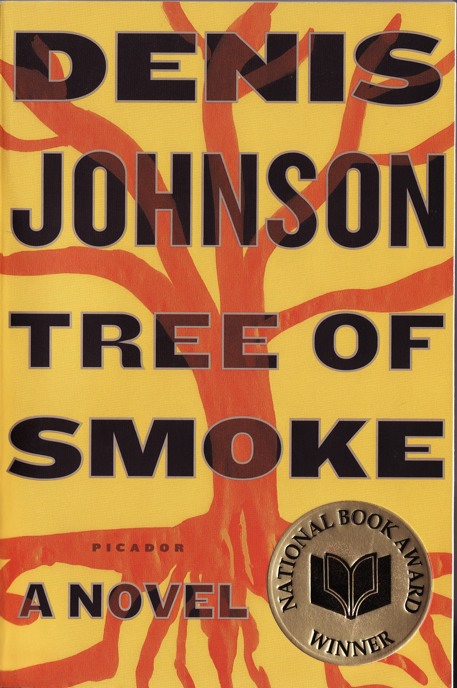 One year after it topped book critics’ best-of 2007 lists everywhere (including ours), Denis Johnson’s Vietnam War epic Tree of Smoke is finally available in a handsome trade-paperback. Picador’s edition retains the original orange and yellow cover, only now affixed with the proud blazon “National Book Award Winner.” However, that Tree of Smoke won this prestigious award no doubt ruffled a few feathers. It still remains an urgently divisive work.

Although plenty of critics and readers loved the novel, including The New York Times‘s Jim Lewis (who cautiously called it “something like a masterpiece”) and Michiko Kakutani, it has had more than its fair share of haters. Consider B.R. Myers’s downright mean review, “A Bright Shining Lie” in The Atlantic. Here, Myers displays the worst kind of vitriol. He’s the critic who feels the need not only to trumpet his hatred of the work he’s assessing, but also to lambaste the dignity, taste, and intellect of anyone who would disagree with him. Myers specifically attacks Johnson’s rhetorical style, his diction and syntax, and concludes that those idiots who would praise such inane, base, and clichéd language (idiots like me, that is) are clearly the cause of all current social and political problems and “have no right to complain about incoherent government.” Uh, sure. Myers’s baseless zealotry aside, it’s worth looking at the popular reception of Tree of Smoke, and what better place to do so than scouring Amazon reviews, right?

A cynic might say that Amazon reviews are the bottom-barrel of literary criticism, yet it’s still worth considering the almost perfectly mathematical split between 5- and 4-starred reviews of the book and 1- and 2-starred reviews (although none of the negative reviews I read on Amazon suggested that praising Johnson’s novel disenfranchised one from political opinions). Put simply, most people tend to either hate or love Tree of Smoke, which, I believe, is a sign of great art. And, were I inclined to inflate my rhetoric to a grandiose level like Myers, I might here wax philosophical about opinion, perspective, history, and the value of great art to ignite debate and discussion within the marketplace of ideas. However, I don’t think a book review is necessarily the best venue to make grand sweeping statements. At best, such writing presents a shallow or hollow endorsement of a collective truth (e.g. “Everyone assesses literature from their own perspective and therefore everyone values books differently”); at worst–in the case of Myers’s grotesque review–we get a pompous, overblown, self-important declaration (here, praising Tree of Smoke = losing the ability to authoritatively comment on society or politics) that can only be supported within the limited rhetorical bounds created the sophist has constructed (i.e. Myers’s review). But I’ve made a long digression, and, worse, I’ve failed to really discuss the book at all.

My initial review of Tree of Smoke last year was really a review of Will Patton’s masterful audio-recording of the novel (I was reading Ulysses for graduate school at the time and simply did not have the time to read both). I loved the experience; Patton did a great job, and I found myself wholly addicted to the narrative. When the advance copy of Tree showed up in the mail earlier this week, I immediately re-read the coda of the book in a single sitting. I would say the measure of a great narrative is not its core, its climax, or its beginning, but how well the conclusion is able to deliver the promises established throughout the book. Tree of Smoke delivers, and its ending continues to haunt the reader well after the book has been set aside. Readers like Myers may not get the payoff–he claims that “Johnson’s failure to understand [his character’s] faith is such that when he uses it to end the novel on an uplifting note, the reader feels nothing.” However, I hardly think that a watery Hallmark-word like “uplifting” properly connotes the weight, pathos, and sheer pain that Johnson conveys and addresses at the end of the book (Myers’s shallow diagnosis leads me to believe he merely skimmed the novel). Ethics of literary criticism aside, the real triumph of Tree of Smoke is simply that Johnson manages to comment in a new way on a subject that, by 2007, had been done to death. Who knew that we needed another story about the Vietnam War? Denis Johnson, apparently. Read the book for yourself. Very highly recommended.

Tree of Smoke is available in paperback from Picador on 2 September, 2008.